How It Works: Building a Kilometer-Long Pipe Deep Under the Sea

Harvesting thermal energy from the oceans takes some powerful engineering 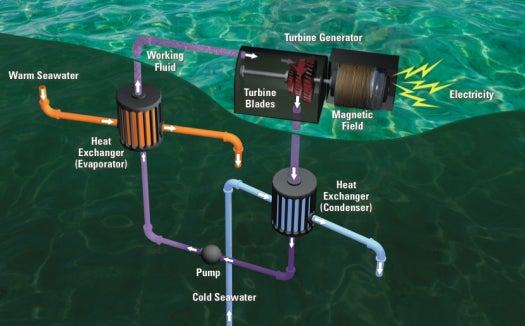 One possibility for future energy production involves harvesting the warmth of Earth’s tropical oceans, using the natural heat differentials in the water to drive turbines. It would be relatively simple if you didn’t need a ludicrously large piece of pipe, 33 feet in diameter and stretching a kilometer beneath the water. To put that in context, that’s a New York subway tunnel wide and two and a half Empire State Buildings high.

“To produce sizable amounts of power, ocean thermal energy conversion plants have to move rivers of water,” said Laurie Meyer, chief technologist for OTEC at Lockheed Martin, which is building the pipe for a new 10-megawatt pilot plant. This structure also needs to withstand the constant rocking pressure of ocean currents, atmospheric pressures at 3,200 feet deep and the variable temperature of the water it’s designed to harvest — so building the pipe has been a challenge. Here’s how Lockheed is doing it.

The oceans are huge reservoirs of warmth, especially in the tropics, where the temperature differential between warm surface water and cool deep water can reach 40 or more degrees Fahrenheit. This differential can be harnessed to run a heat engine, using some principles from utility plants, plus some from refrigeration. Warm surface water goes into a heat exchanger, which vaporizes an ammonia solution; the resulting steam drives a turbine, and the ammonia is re-condensed using cold ocean water. The water is then pumped back into the ocean, a few degrees warmer than when it came in. But to reach the energy production scales of a traditional fossil fuel-fired power plant, 100 megawatts or more, you need a whole lot of water.

Lockheed first explored OTEC in the 1970s, and it’s resurrecting the concept now in the face of rising energy prices. A 10-MW plant is expected to be operational within a couple years. Under a U.S. Navy grant, Lockheed designed a new composite material for the pipe, and engineers have been building prototypes at the company’s plant in Sunnyvale, Calif. Full-scale OTEC pipes will be made right at the site of the power plant by extruding them right into the water.

A 3,200-foot-long, 33-foot wide pipe is not something you could build in a factory, haul out to sea and drop into the water, Meyer explained. Aside from the logistical challenges of moving it along railways or barges, it would probably be impossible to raise it to the right angle and drop it down to the proper depth. Instead, Lockheed will build it in place, using techniques the company first developed for spacecraft construction.

The manufacturing process is called vacuum-assisted resin transfer moulding, and it’s the same basic process Boeing uses to build its 787 Dreamliner. VARTM typically consists of a polyester or vinyl resin reinforced by fiberglass, and Lockheed settled on a customized ratio (which they wouldn’t disclose for competitive reasons) that meets all the flexibility and stability requirements for a cold water pipe. 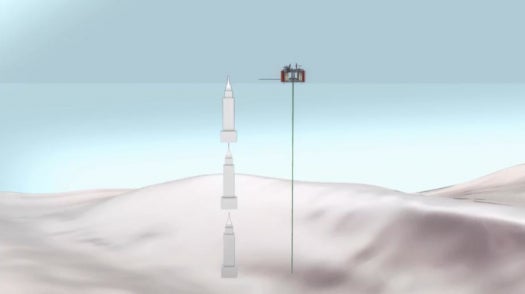 The cold water intake pipe for an ocean thermal energy conversion plant would need to be at least 1 kilometer long — just about as tall as three Empire State Buildings.

“We designed a system to take that process and turn it vertical, which allows us to pump out sections of the pipe,” Meyer said. To make a section, the fabric and resin poured into a mould and allowed to cure, just as concrete would. A vacuum removes any imperfections and bubbles, leaving a perfectly formed tube in place. Lockheed will do this in sections, the sizes of which are still to be determined, Meyer said.

“The longer you can make a section, the faster you can finish building the whole length of pipe, but there will be some practical limit in terms of handling the finished section,” she said.

The platform where these sections will be formed have to be built to withstand winds, storms, currents and other phenomena, and Lockheed will use techniques pioneered by the offshore drilling industry, she added.

For the 10-MW plant, Lockheed is building a 4-meter diameter pipe (about 13 feet). For a full-scale, 100-MW plant, the pipes would be 10 meters, or 33 feet. The length of the pipe will be determined by the depth of the cold water — in some potential OTEC sites, chilled water may lurk around 1,000 meters deep, and in others, it may be shallower. The world has plenty of areas where OTEC could work, mostly around the equator.

By the way, the pipe will also have to be built to avoid sucking in marine life. Cold deep water is nutrient-rich, but doesn’t harbor dense populations of marine life because it’s so dark — yet many mammals, squid and other creatures of the deep might swim past the intake. The U.S. Environmental Protection Agency is working with Lockheed to determine maximum intake velocities, so animals could safely swim away rather than being sucked into the pipe.

Ultimately, OTEC plants will be useful for tropical communities — like Hawaii, the Philippines, and so on — or for Navy bases, which currently rely on imported fossil fuels. It could replace or supplement traditional power plants for large-scale, baseload electricity, according to Lockheed. But it couldn’t work without gigantic pipes.