Mythbusting: The Vampire Squid Is Not A Lethal Ocean Predator 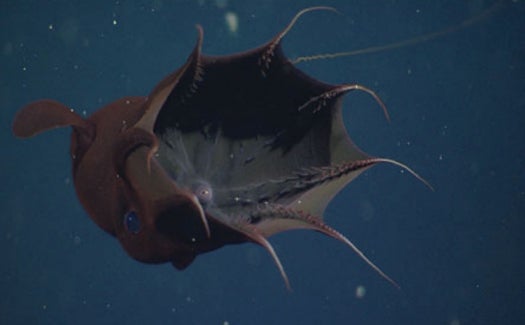 There’s nothing particularly cuddly about the vampire squid, and on top of that, it’s named the vampire squid. It’s even known by the vaguely hellish Vampyroteuthis infernalis. But the little guy is catching a break, finally: it’s not a vampire, just a slime-eating garbageman of the deep.

Two marine biologists at the Monterey Bay Aquarium Research Institute went way back to clear its name: all the way to museum examples, which they studied the stomach contents of. They also took the experiment into the present by studying the squids’ eating habits in a contained environment and by observing it with robots.

They found that the vampire squid used arm-filaments to reach out and cautiously scoop of bits of (nonliving) debris as food. Which adds up, since the squids tend to live in a low-prey, low-predator part of the ocean.