We’re About To Get Regional Forecasts For Solar Storms

Cloudy with a chance of coronal mass ejection 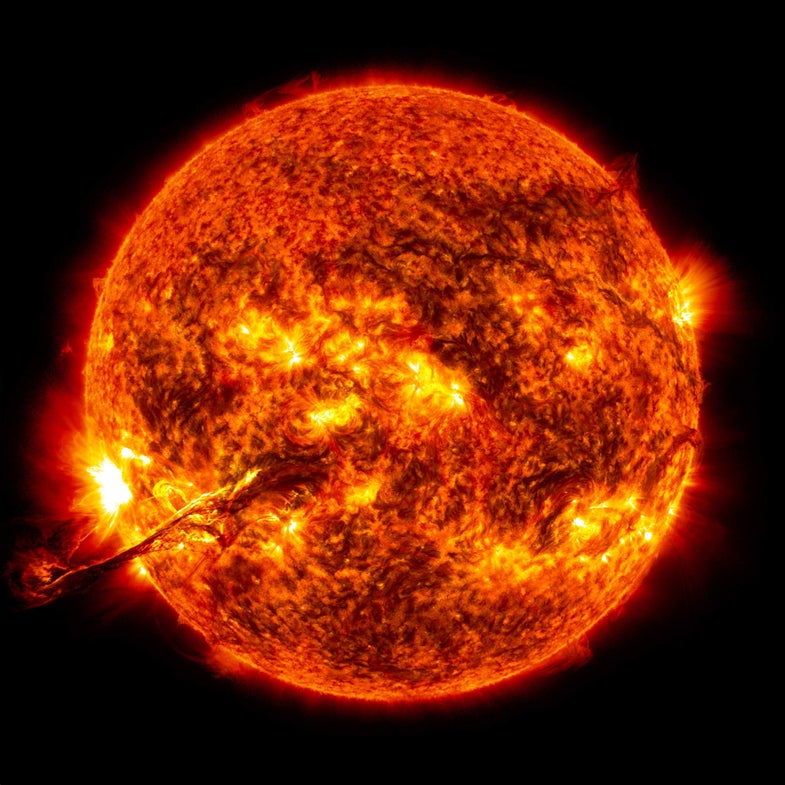 Luckily, there is now a forecasting model that is up to the challenge. Starting on October 1, space weather forecasters at NOAA’s Space Weather Prediction Center will be able to give a regional space weather forecast to utility companies, allowing them to brace for fluctuations in the energy grid.

The regions being forecasted are large for a local weather forecast, but compared to previous space weather models, the plots are relatively tiny–just 350 square miles, or about a third the size of Rhode Island. The model, which was developed by researchers at University of Michigan and Rice University, can give utilities up to 45 minutes of warning of severe solar activity, less if the solar storm is moving particularly quickly.

Solar storms, also known as geomagnetic disturbances can come in many forms, but some of the largest are coronal mass ejections (CMEs), or huge masses of plasma mixed together with magnetic fields that explode off of the sun periodically. Currently, astronomers can see a CME coming off the sun, and existing models can predict if it will hit Earth hours or even days ahead of time, but not with any degree of regional accuracy. “It would be like a normal weather forecaster saying it’s going to rain somewhere on the Earth sometime today,” Howard Singer, Chief Scientist of the Space Weather Prediction Center tells Popular Science.

The new model takes advantage of the position of the NOAA satellite DSCOVR, perhaps best known for capturing stunning images of Earth from its stable orbit at the Lagrange point L1, a spot one million miles away from Earth that is always positioned directly between the Earth and the Sun. From that position it can measure the magnitude of the magnetic field wrapped up in a solar storm.

“It’s like a buoy upstream of a coastline,” Singer says. The data from DSCOVR can be fed into the new model minute by minute, and give a regional heads-up to areas that will be more affected by the incoming solar disturbance than others.

Not all areas of the Earth are affected by solar storms in quite the same way. If Canada is directly in the path of a storm, it might be more affected than, say, Australia, and power plants in Canada might want to take extra precautions, making sure that there is plenty of space on the grid to accommodate the increased current, and monitoring older transformers to make sure they don’t fry.

“A forecast that is granular to a regional level can be more effective because it can alert the right utilities of solar storms that could affect their operations,” Mark Olson, a Senior Standards Developer with the international regulatory group the North American Electric Reliability Corporation (NERC) tells Popular Science.

Lately, solar storms hitting the Earth have been relatively mild in their impacts, but we know that they can be very large and severe. In 2012, a large CME just missed the Earth, but hit a satellite called STEREO A, which recorded the whole thing, and collected data that indicated that the event would have caused a massive global disaster if it had hit the Earth, potentially overloading the grid and destroying transformers.

Giant CMEs have hit Earth in the past. One of the largest solar storms, known as the Carrington Event, happened in August and September of 1859, when a huge solar flare caused aurora to be seen as far south as Panama, and disrupted telegraph wires around the world.

Solar storms since then, in 1921, 1989, and 2003 have caused infrastructure damage, large blackouts and even, in 1967, brought us to the brink of war. But none of those were as large as the Carrington event.

Keep in mind that the Carrington event happened before the American Civil War, and that today we rely far more heavily on electricity than we did 157 years ago. If a similar event (like the one in 2012) caught our aging grid unaware, the increased electrical load has the potential to damage electrical transformers, potentially blacking out the energy system for an extended time, as transformers are neither inexpensive nor easy to manufacture.

Forecasters hope that the new system will give utilities enough time to react to prevent an extended blackout, and plan on refining the model as time goes on, eventually adding in information about the geology of various regions with the help of the USGS.