NASA Solar Probe Sets Controls for the Heart of the Sun, Literally

In a mission to learn more about the sun’s inner workings, NASA is planning to launch a specially shielded spacecraft... 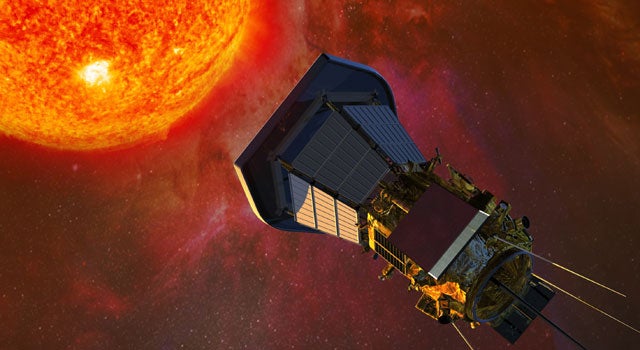 In a mission to learn more about the sun’s inner workings, NASA is planning to launch a specially shielded spacecraft in 2018 that will plunge into the solar atmosphere. The car-sized Solar Probe Plus will explore an area just 4 million miles from the star’s surface, the last region of the solar system to be explored by humans.

NASA just announced five science experiments that will fly on the scorching probe, which will be protected by a carbon-fiber heat shield that can withstand temperatures of 2,500 degrees F.

When the probe is 4 million miles away, the solar disk will loom 23 times wider in the sky than it does on Earth.

The SWEAP solar wind experiment will count the electrons, protons and helium ions in the solar wind and measure their properties. It will also catch some in a special cup for analysis.

Another science mission will use a wide-field camera to take 3-D pictures of the solar wind as the spacecraft flies through it. Another will take direct measurements of the sun’s magnetic fields, radio emissions and shock waves, and the one more will take an inventory of the sun’s contents.

“For the very first time, we’ll be able to touch, taste and smell our sun,” said Lika Guhathakurta, Solar Probe Plus program scientist at NASA headquarters.

NASA’s goals are to figure out why the sun’s corona is several hundred times hotter than the surface and why it produces an accelerating solar wind. Scientists already have high-resolution images and data of the transition zone between the atmosphere and the surface, and the solar wind has been studied extensively — but still, no one can answer some fundamental questions about the sun’s evolution. The only way to do it is to go to the source, NASA says. Here’s hoping the spacecraft doesn’t get burned.