Last night, NASA’s Messenger probe fired its thrusters and became the first man-made satellite ever to orbit Mercury. It’s a... 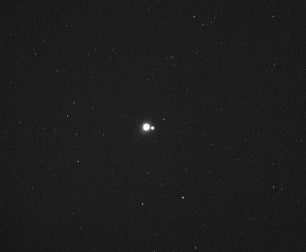 Messenger took this photo last spring of Earth and the moon from 114 million miles away.

Last night, NASA’s Messenger probe fired its thrusters and became the first man-made satellite ever to orbit Mercury. It’s a major achievement for NASA and planetary researchers who hope to learn more about the formation and evolution of Earth-like rocky worlds, in this solar system and beyond.

Messenger was hurtling through space 96 million miles from Earth when its main thruster fired for 15 minutes starting at 8:45 p.m. eastern time, slowing it down by 1,929 miles per hour. It needed to move slowly enough for wee Mercury’s gravitational field to pull it in.

It can be difficult to insert a spacecraft into orbit around another world, as evidenced by Japan’s failed attempt to send the Akatsuki craft into orbit around Venus last winter. Akatsuki’s thrusters failed early in its insertion burn, causing it to overshoot the planet and enter a solar orbit. Japanese researchers hope to try again in six years.

About an hour after the rocket fired, Messenger rotated toward Earth and started sending data confirming it was circling the first planet. Researchers cheered as they watched the data stream into the mission’s operations center at the Johns Hopkins University Applied Physics Laboratory.

It’s been a long time coming; Messenger was first planned 15 years ago, and launched in 2004. In the past six and a half years, it has traveled about 4.9 billion miles, including a flyby of Earth, two of Venus, three of Mercury and 15 orbits around the sun. The planetary flybys were mostly to slow it down in preparation for orbital insertion, but also included some never-before-seen views of Mercury and some new science observations.

The probe is in a 12-hour elliptical orbit, bringing it as close as 124 miles from Mercury’s surface and as far as 9,300 miles. A ceramic heat shield will protect its science instruments from the sun, which will be just 29 million miles away, shining 11 times brighter than it does on Earth.

The next few weeks will consist of diagnostic tests to ensure everything is working properly in Mercury’s inhospitable environment. The primary science phase starts April 4, according to APL.

Messenger Principal Investigator Sean Solomon, of the Carnegie Institution of Washington, said Messenger has already made history. “Mercury’s secrets, and the implications they hold for the formation and evolution of Earth-like planets, are about to be revealed,” he said.