They're even better than the real thing in some ways. 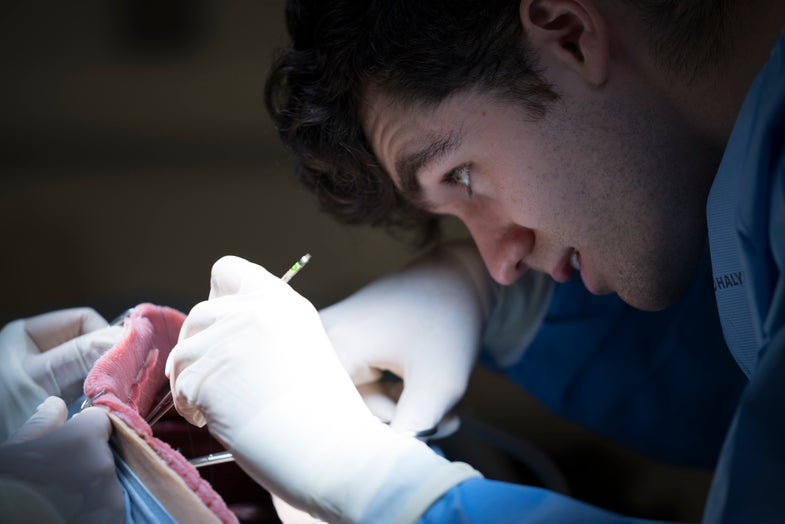 Like pilots, surgeons need to practice before they can fly solo. For veterinarians in the making and in their last year of school, that means learning by watching an actual procedure on a real animal, and perhaps actually getting to perform a part of it on their own. Another option is hands-on work with a dog cadaver, which comes with its own drawbacks, including making sure they’re defrosted at the right time.

But veterinary students at Cornell University have been practicing procedures on synthetic canine cadavers—a way for them to gain important surgical experience without operating on a real animal.

The artificial dogs come from a company called SynDaver Labs, which creates what their CEO and founder, Christopher Sakezles, calls “tissue analogues.” They’re known for a synthetic human—it, and Sakezles, made an appearance on Shark Tank in 2015—and their first-gen canine cadaver came out in 2017. Besides Cornell, institutions like the University of Florida and Texas A&M University also have a number of synthetic canines from SynDaver Labs. The company creates the tissue, Sakezles says, out of water, salt, and fibers that are either plant-based or synthetic, like polyester.

Cornell has had three artificial canines for about six months, although only one of them is the full body: the other two only simulate the animal’s abdomen.

So why the synthetic cadavers?

The Cornell University Hospital for Animals tends to see challenging cases—they receive animals in high-risk situations from other facilities. “Our caseload tends to be things that general practitioners are not comfortable cutting,” says Galina Hayes, an assistant professor in the section of small animal surgery at the Cornell University College of Veterinary Medicine. In other words, it’s not an ideal place for veterinary students to get hands-on experience learning basic skills.

“The cases are not only complex, but the patients are often unstable,” she says. Unstable cases means that the animal patients shouldn’t be kept under anesthesia any longer than absolutely necessary. “Trying to keep a short anesthetic time, combined with a novice surgeon, are two mutually incompatible goals.”

Thus the need for the synthetic cadavers, which are actually a better option than a genuine canine cadaver. “Pretty much as soon as a dog, or a human for that matter, dies, the intestine starts to degrade and you stop being able to suture it with any kind of realism,” she says, noting that the intestines become tissue-paper-like. Those aren’t the only problems real cadavers pose. “They have to be defrosted three days before you want to use them.”

The synthetic cadavers also mean that another brutal and upsetting option doesn’t need consideration. That’s what’s known as a kill procedure, in which a vet student practices more than one procedure on a live, but anesthetized dog, which is later euthanized. “The general trend, is, thank goodness, moving away from that,” Hayes says. (She says that option was a non-starter for them.)

Logistically, when the synthetic canines aren’t in use, they must be stored in liquid so they don’t dry out—Sakezles says they would be like a cooked spaghetti noodle left out on the counter; thus, they are immersed in water that’s treated similarly to pool water to prevent stink-causing fungus or bacteria from prospering.

SynDaver Labs is currently working on a synthetic equine (not a complete horse, but horse parts, like a head-and-neck simulator) and a cat, which is intended for dissection in schools, not for veterinarians practicing their skills.

At Cornell, Hayes says that the SynDavers don’t perfectly mimic a real, live canine, but nonetheless offer a more realistic operating experience than a flesh-and-blood cadaver would. “We feel much happier about the level of training that we’re able to provide these kids with,” Hayes adds. And that hands-on training is key. “Most of this is about acknowledging that surgeons are made, not born.”