How your dog could go vegan and still stay healthy

Though we think of them as carnivores, dogs' nutritional needs can be met in other ways. 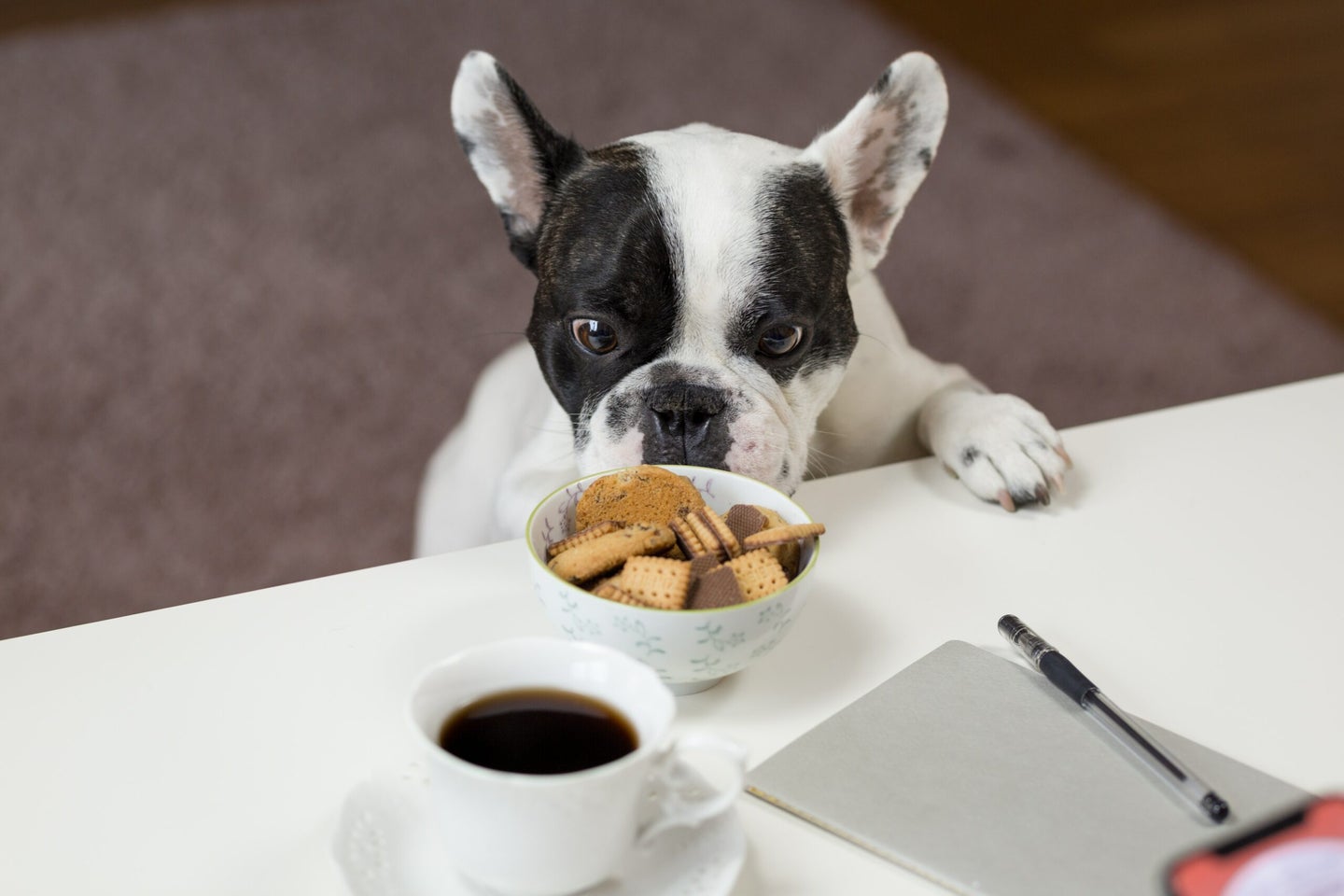 At least once a month, Los Angeles-based lawyer Lisa Bloom and her husband head into their kitchen to whip up a large batch of food for their two beloved rescue dogs. They mix together a range of ingredients, including rice or quinoa, kidney or other beans, coconut oil, peanut butter, and leftovers—though Bloom admits it can be difficult to get the dogs interested in any vegetables other than sweet potatoes. Crucially, it’s plant-based, much like Bloom’s diet. “I just don’t think it’s ethical for one group of animals to die so another can live if it’s at all possible to avoid that,” she says.

Bloom’s position doesn’t end at home. She’s part of a small group—which also includes the musician Moby—petitioning Los Angeles to introduce a vegan diet for all dogs in the city’s shelter system. “My friend Roger Wolfson is the L.A. animal commissioner and he started asking himself why they rescue chickens and rabbits and yet feed the dogs food that has chickens and rabbits in it,” says Bloom. She estimates that making this change could save up to 30,000 pounds of meat per month.

Bloom’s advocacy might seem radical—or at least “very L.A.”—but her small group of animal activists are actually part of a growing frontier for the almost $30 billion U.S. pet food market: vegan and slaughter-free meat alternatives for cats and dogs.

Faced with growing concerns about the environmental and ethical implications of feeding our furry companions, the future of premium pet food is going high tech to satisfy growing consumer consciousness and sense of personal responsibility. In addition to concerns about animal cruelty and the now well-known horrors of factory farming, consumers are also increasingly aware of the global implications of eating meat. One 2017 study found that pets are responsible for 25 to 30 percent of the environmental impact of meat consumption in the United States.

For this reason, the same processes to create animal-free or lab-grown meat for human consumption are now being replicated for pets—but with one very clear advantage. “Companies working on human fake meat are trying to get the form, taste, smell and tactile characteristics and all of that stuff perfect because that’s the only way the public will embrace it,” says Rich Kelleman, founder and CEO of Bond Pet Foods in Boulder. “We need to create a safe and effective product that has the identical nutritional profile as conventional meat, but a dog doesn’t care. We don’t have to get it to look and smell and taste like a steak, which gives us a lot more technical flexibility and reduces the cost.”

Kelleman, a former advertising executive, says that two things largely inspired him: growing concerns about his own consumption footprint, and Rumples, his rescue dog. “Boulder is a pretty progressive town when it comes to food culture, and when [my wife and I] got our puppy, we wanted to shop for her the same way,” he says. “But it was tricky because the pet industry hasn’t been very transparent about where things come from—especially the meat proteins, which is a core nutritional ingredient.”

Bond has described their fermentation process as similar to craft brewing. They grow animal proteins in a microbe by getting them to express the exact amino profiles they’re looking for and then harvesting them once they reach a certain density. Inside a fermentation tank, the mixture—which the company won’t disclose specifics on but describes as similar to a microalgae, yeast or fungi—undergoes oxygenation while being fed a nutrient-rich broth of sugars and vitamins, which will then be mixed with other ingredients like rice flour, coconut oil, flaxseed and carrots to create a whole meal. (They’re still developing a prototype.) “We don’t need to slaughter animals, and we don’t need all of that land or water or energy to produce equivalent calories,” says Kelleman.

Other pet food startups have channeled similar concerns into vegan alternatives or supplements. Wild Earth, a startup in Berkeley, California, has crafted dog treats out of koji, a protein-dense fungi commonly found in Japanese foods like soy sauce and sake. And a Philadelphia startup, Because Animals, is selling animal-free “superfood” supplements for cats and dogs while working on a whole meal replacement. The supplements include seaweed, organic blueberries, organic coconut flour and turmeric. “All of our ingredients are human grade,” says Shannon Falconer, CEO of Because Animals, who sometimes adds a scoop of her dog Trots’ supplement to her own smoothies.

Even for animal lovers, it’s not difficult to understand why someone might roll their eyes at the idea of feeding organic wheatgrass—a longtime staple of bourgeois human juice bar culture—to a dog. But Falconer says that these trends tie into a strong movement towards the humanization of our pets. “People want to feed their pets recognizable ingredients, the foods that [humans] can eat,” she says. “And like with humans, these are not nutrients that pets need to survive but they are nutrients that help pets thrive.” Falconer says that Because Animals is aiming to have a dental cookie comprised of kelp and nutritional yeast on the market by next year.

Again mirroring human food trends, most of these boutique animal-free pet foods will be priced at the premium end of the spectrum, at least initially. But as manufacturers both scale up and create efficiencies, and as consumer consciousness rises, they hope to extend beyond niche status.

Some critics might argue that these new-fangled diets are unnecessary or even harmful for animals that would eat meat in nature. But advocates have an evidence-backed counterargument. “Domesticated animals are eating food that’s very different from what they would be eating in the wild,” says Falconer. “They need specific nutrients, not specific ingredients.” The general consensus among supporters—bolstered by these 2014 and 2016 studies–is that dogs can thrive on a vegan diet, provided that diet is attentively calibrated to their well-documented nutritional needs.

Dogs have been domesticated for thousands of years and their diets, along with other pets’, have long since diverged from those of wild animals. That’s not to mention all the other changes we’ve forced them into, from wearing tiny sweaters to being pushed around in purpose-built strollers. We’ve long since acknowledged a special relationship with our pets that bears little resemblance to our relationship to other animals. Pet food should be no different.

Advocates like Bloom are hoping to blur the line between animal and companion even further to influence how we feed our pets. “Dogs are the ambassadors of the animal world sent to make us think about our choices,” she says. “I would consider anyone who loves a dog to extend that compassion to other animals.”