This headless chicken is the deep-sea ‘monster’ of our dreams

A mysterious and wonderful cuke. 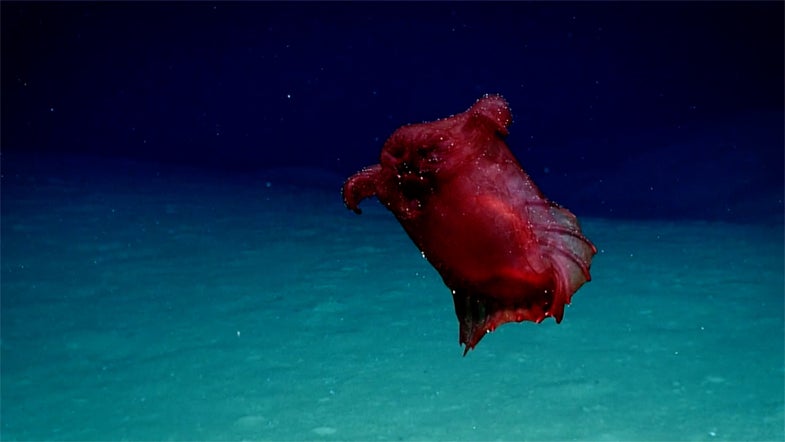 The researchers who most recently captured footage of one of these swimming globs of gelatinous flesh weren’t the ones to name it, but they are the first to find it so far south. This particular cuke was hanging out in the Southern Ocean off the coast of East Antarctica. Other scientists have only ever filmed it in the Gulf of Mexico, though other sightings have been recorded since it was first discovered in the late 1800s.

Researchers from the Australian Antarctic Division Program braved the chilly Antarctic waters in an effort to assess how diverse and robust these deep-sea ecosystems are. Humans have been plundering deeper and deeper in search of fish to eat, so protecting the bottom of the ocean is of increasing importance—but in order to protect an area, you first have to know what you’re protecting how it’s already been affected. This particular mission was mapping how much impact deep sea fishing has had on this remote part of the ocean, especially as it relates to the Antarctic and Patagonian toothfish (that’s Chilean sea bass for you foodies). That research will be presented at this year’s Conservation of Antarctic Marine Living Resources annual meeting, which is going on from now through November 2.

Enypniastes eximia, in scientific parlance, is weird and wild, but we still don’t know that much about it. And that’s pretty standard for deep-sea critters. Though we now have the technology to send cameras down thousands of meters and can sometimes bring samples to the surface, it’s difficult to study animals that live two miles into the drink.

Take the blobfish for example. A blobfish out of water looks like, well, a blob—that’s how it got that name. They look like if you took a bald man’s head, gave it a bulbous nose and applied slime to it, then attached fins to the sides. But that’s just on the surface. Put them 9,200 feet below water, which is where they’ve adapted to live, and they look like fairly normal fish. Here’s a drawing of one:

The only reason we think blobfish look blobby is because we first observed them at sea-level, not at the intense pressures where their admittedly saggy flesh get compressed into standard fish shapes. Their lack of a skeleton (or even much muscle) is a huge advantage several miles below the surface—it only looks silly up here. Because so much of what we know about these animals comes from research done out of the water, it took us quite some time to realize our mistake.

But we do know a few things about swimming sea cucumbers that will make you appreciate them beyond their funny colloquial name. For one, they glow. Their gelatinous flesh contains little granules that produce bioluminescence when the cuke bumps into something. This is especially useful as a sort of burglar alarm to help warn other creatures in the area when a predator is about. As one paper about Enypniastes eximia put it, “strong physical contact causes the skin to be sloughed off in a glowing cloud.” Their skin is also quite sticky, so predators that bump into the sea cucumber end up with a sort of glowing patch that can warn other critters of danger.

Enypniastes eximia can also swim. That might not seem unusual for an underwater creature, but many sea cucumbers cannot. Like true cucumbers, they’re not all that mobile, and instead spend their whole lives on the ocean floor eating detritus and other sea trash. But the headless chicken monster’s webbing and fins allow it to propel its squishy body up off the floor to escape from predators. These fins are quite frilly, which is probably how the species got its other name: the Spanish dancer. Given that sea cucumbers do nothing except break down and recycle other animals’ waste, thereby propelling the circle of life onward, perhaps we should consider calling this beautiful sea cuke a Spanish dancer rather than a headless chicken monster. It may be technically headless, but it’s certainly no monster.