Millions of American students and employees lack the necessary connection. 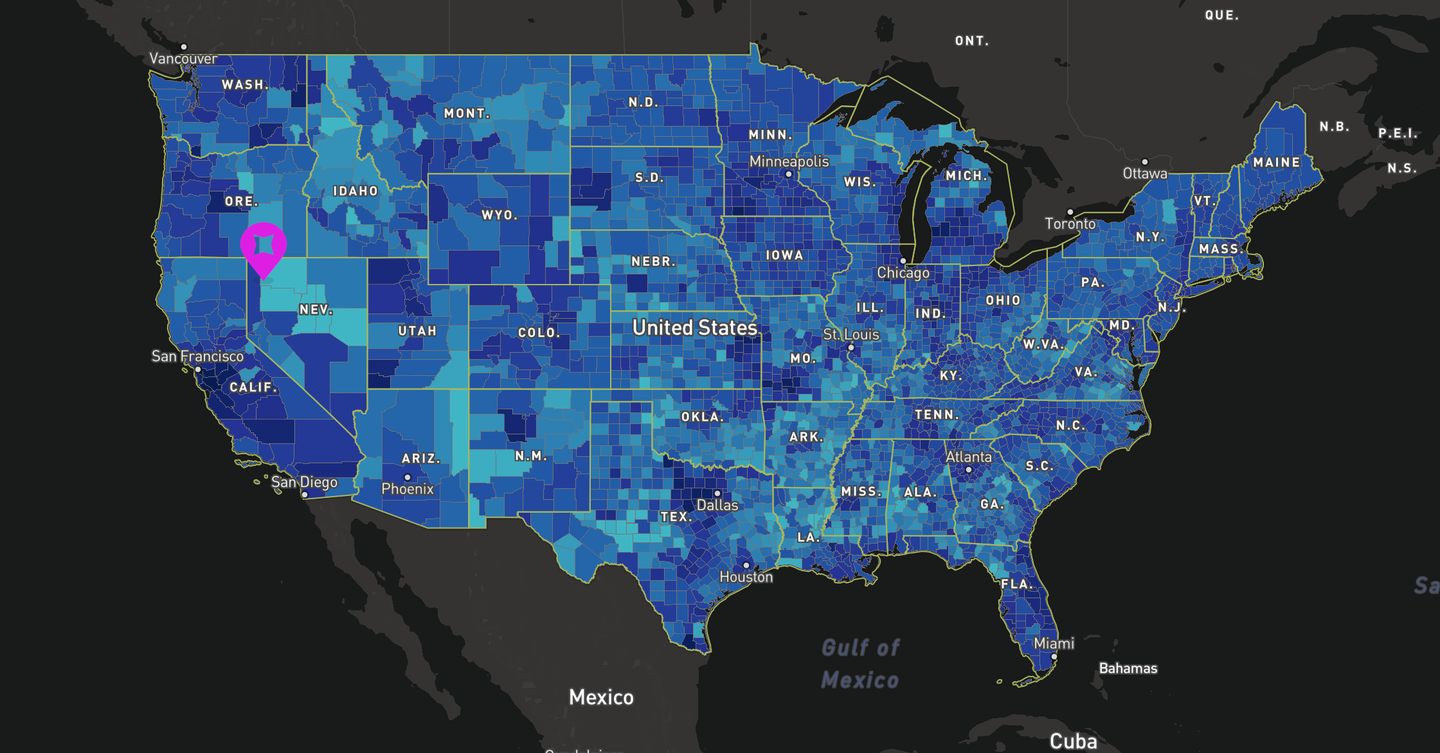 The FCC's coverage map shows how many internet provider options exist for different parts of the country. Many locations have one cable provider and rely on more niche satellite options beyond that. FCC
SHARE

This post originally appeared in April 2020 and has been updated.

Working from home is often more complicated than it sounds. When your job consists mostly of typing away on your laptop and fending off a never-ending parade of Slack messages, it seems easy enough to do it from just about anywhere. But in reality, not every living space is set up to double as a workplace, especially when you consider the work-from-home internet speed requirements.

Once you start taking more meetings from home, it’s no longer about whether you’re going to get the true 4K picture quality when you’re watching Stranger Things, but whether you’ll be able to talk to your bosses, coworkers, and clients.

If you’re curious about what kind of upload and download speeds you’re actually getting, you can try a website like Speedtest.net or Netflix’s Fast.com, which will give you a real-world look at your device’s performance. Even if you pay for fancy 1000 Mbps speeds from Verizon or another provider, you likely won’t get close to that, at least over a sustained time. Even though my connection is capable of 1000 mbps, my laptop regularly sees download speeds around 500 Mbps.) That’s still very fast compared to the national average of 64 Mbps, but it also changes as I move around my house.

It’s worth doing the test a few times from different points within your living space to see if there’s a considerable drop-off from one spot to another. The couch may seem like a comfortable place to work, but if your Wi-Fi signal struggles to make it over there, it may cause trouble.

If you have several people working from home, including students, it can tax your connection. The latest version of Wi-Fi, known as Wi-Fi 6 (and now Wi-Fi 6E), is better at handling multiple heavy streams at once; even if your laptop or devices are compatible with the new protocol, though, the routers required to dish out those speeds are still relatively uncommon and fairly expensive.

Not every productivity app requires a fat internet pipe. If you’re just sending email or typing into Slack, even a basic airport-grade connection will do just fine. Stepping up to voice and video chat, however, might severely test your limits.

Here are the basics for the most common video-chat options:

You can find all the current Zoom requirements (as of April 2021) here. The specific requirements are also pasted below. As you can see, the minimums change depending on what you’re trying to do.

Cutting your video feed and concentrating solely on the audio will save you some data usage—and let you skip brushing your hair or putting on a presentable shirt. But if you have to share your screen or actually appear on camera, you’ll need to meet the minimum requirements shown above.

If you have to access your company’s local servers via a VPN service, you’re bound to encounter even more variables. Even if your connection to the web is fast, its performance over the VPN could be considerably slower, especially if it’s crowded and you need to work with large files like magazine pages with high-res imagery.

Who has the speed they need?

Since 2016, the FCC has done considerable chest-beating about its efforts to bring broadband to more rural and remote communities. In February 2019, the commission claimed that the number of Americans lacking access to steady 25 Mbps download and 3 Mbps upload connections dropped from 26.1 million in 2016 to 19.4 million at the end of 2017. The report also claimed a 20-percent jump in those with access to 100 Mbps/10 Mbps connections, and a 45-percent hike in 250 Mbps/50 Mbps links.

The FCC later appended that report, admitting that it left out roughly 1.9 million people lacking a solid connection. In early 2020, a study from an independent company known as BroadbandNow estimated that the real number of Americans without access to stable broadband sits more in the 42.8 million range, which is double the federal government’s claim. While the FCC keeps a map of fixed broadband deployment to show how many options residents in specific areas have when it comes to broadband coverage, it’s difficult to truly assess how accurate it is (the information is from December of 2018, which makes it well over a year old).

The ability to work from home, however, doesn’t simply apply to employees in offices: It’s also affecting students. The “digital divide” regarding students’ overall access to technology has been a topic of conversation for more than two decades, but in recent years, the so-called “homework gap” has become a more prominent topic of conversation. In 2019 an AP report estimated that 17 percent of students didn’t have access to a computer at home, while 18 percent didn’t have reliable broadband access.

Even when students have their own devices issued to them by the school, they’re often Google Chromebooks, which rely on the internet for most of their critical functionality and make up roughly 60 percent of the educational market. Most states, including New York, have told schools to prepare contingencies for students to learn remotely in case of a long closure to contain the novel coronavirus. Exactly what those contingencies should be, however, is unclear.

The Miami-Dade school district has said that it has 200,000 electronic devices ready to loan out to students in case the need to stay at home But, as Fast Company points out, not all parents can work remotely, which means students may end up in daycare or other programs without access to an internet connection.

Roughly 180 million children in China have been affected by quarantine-related school closures. Techniques for remote learning there have spanned from existing technologies like Zoom—the same platform you might use to work from home—to custom platforms built quickly to operate on a massive scale. Reports claim that Chinese students have tried to inundate DingTalk, an app used for remote learning, with enough bad reviews that it would get kicked from the app stores and make remote learning more difficult or impossible.

While the COVID-19 pandemic has slowed substantially in some parts of the world, it’s still raging in others, which means many people around the globe still have to deal with lockdowns and remote work as a necessity. While the US has made some progress in the past year when it comes to evening the broadband playing field, it still has a very long way to go before everyone gets the access the modern world requires.