IQ is a really stupid concept

It's stacked against most of the world. 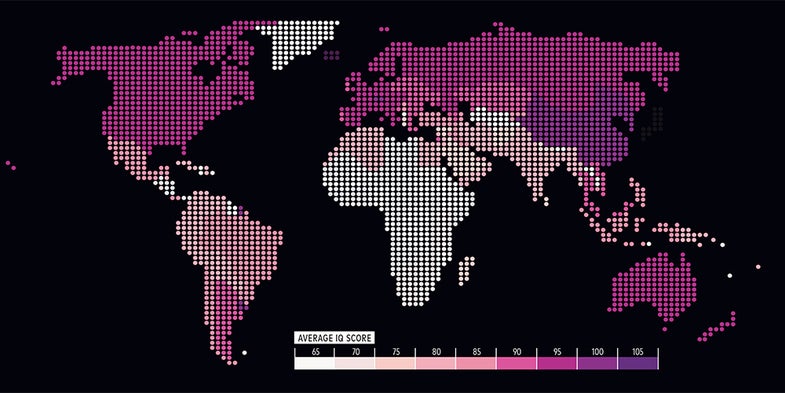 Too many of us use the terms “IQ” and “intelligence” as if they’re interchangeable. They’re not. An IQ score isn’t a magical signifier of smarts; it merely quantifies your ability to take a particular kind of test. Wealthy, white Westerners tend to perform among the best on these exams, but that doesn’t mean they’re smarter than the rest of the world. Research increasingly indicates that the advantages that group enjoys—like better education and healthcare—set them up for success on such evaluations. And it doesn’t hurt that the most expensive education is generally geared toward improving one’s ability to fill in the proper bubbles. Access to money, school, and medicine can all change apparent acumen—but IQ ignores inherent intellect. Race In some parts of the world, kids given IQ assessments were unfamiliar even with the concept of standardized testing, let alone with the question format or subject matter. The established correlation between race and IQ doesn’t reveal an inherent genetic advantage. It shows how closely your score is tied to health, wealth, and access to education.

Research suggests that the physical toll of illness prevents proper brain development. So it makes sense that people in disease-prone areas with poor healthcare systems wouldn’t score as well on these types of examinations. Individuals with high IQ scores tend to live longer, but probably not because they make smarter medical choices.

For every additional year of school, the average person can notch another two to three IQ points, which often helps those in richer regions outperform their poorer peers. Early childhood, when the brain is still developing, is especially crucial. But even older children adopted into more-educated homes can gain around 12 points over biological siblings.

Today, the average IQ in Kenya hovers around 72, slightly lower than a Brit would have scored in 1948. Marks reliably rise in developed nations; increasing access to education, healthcare, and food improves living conditions and fuels brain development. The so-called Flynn effect is leveling off in the West, but Kenya is still on an upward trend, notching 25 points since testing began in the ’80s. Many impoverished countries have yet to turn this corner. When they do, we should expect to see a great IQ equalizing.