A proof-of-concept experiment could lead to super-resistant crops 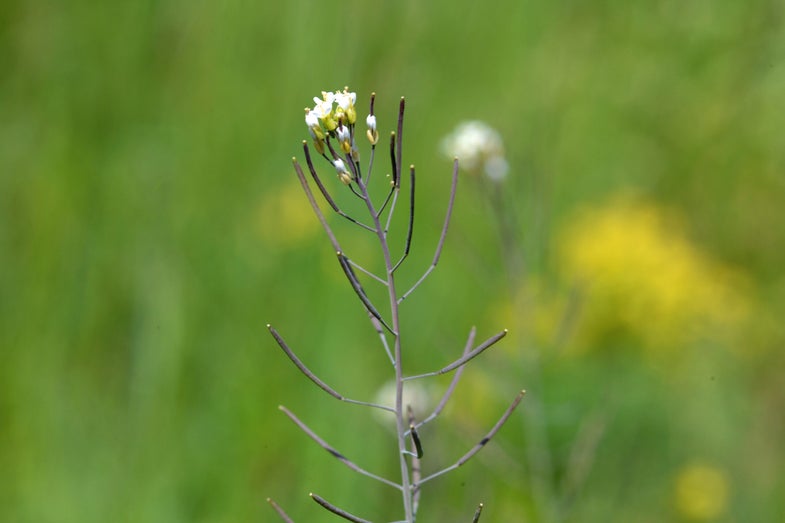 Plants have to deal with a lot of threats, from insects that want to munch them to bacteria that would like to infect them. It’s tough to put up a defense to multiple attacks at once, all while maintaining the energy to grow.

But researchers at Michigan State University may have figured out a way to help plants withstand attacks by both insects and certain pathogens simultaneously. The work published earlier this month in the Proceedings of the National Academy of Sciences.

One of the major defense mechanisms in plants is jasmonate, a stress hormone. When an insect bites the plant, it triggers the jasmonate pathway, which causes the plant to release compounds that discourage the insect from eating more. These compounds are called protease inhibitors, and they make it so that the insect can’t digest the plant material.

When jasmonate is active in the plant, it tends to inhibit a separate hormone called salicylic acid, which protects against pathogens.

The trouble is, some pathogens can hijack this system to make the plant more vulnerable to infection. For example, strains of the bacteria Pseudomonas syringae produce a toxin called coronatine that mimics jasmonate—it’s similar in size and shape, and can attach to the same receptor that causes the jasmonate cascade. In other words, the bacteria trick the plant into reacting to a phantom insect, so that the plant lowers its defense against the pathogen. The bacteria can then sneak in. And boom: Infection.

The goal for the new research was to stop this from happening. “We were always thinking: how can we separate the cytotoxin from the salicylic acid pathway and maintain the jasmonate pathway?” says Li Zhang, a graduate student in plant biology at MSU and first author on the paper.

The MSU team first tried to manipulate the structure of the receptor so that it couldn’t attach to the toxin but, says Zhang, it didn’t work. Next, they looked at related receptors in two mosses, which are less complex than their target plants and didn’t evolve the same jasmonate pathways. Ultimately, the researchers figured out that by swapping a single amino acid from a moss into the more complex laboratory model Arabidopsis, they could get the desired result.

“Basically, now the plant is able to defend not only insects, because that hormone pathway is normal, but also against bacteria, which evolved to overcome the defense system,” says Sheng-Yang He, a Howard Hughes Medical Institute–Gordon and Betty Moore Foundation investigator at MSU, who led the study.

For this paper, the scientists used older genetic engineering techniques to alter the jasmonate pathways. But they hope to move to newer gene editing methods such as CRISPR for future projects, which will allow them to swap out the amino acid with relative ease. “Because it’s a single nucleotide change, it’s perfect for CRISPR,” says He. The next step, he adds, is to move the research to soy and tomato. If it works, it could provide a new way to engineer resistant crops.

“I think it’s a nice paper that establishes a potential route to not only make this change—perhaps it could be feasible in other situations as well,” says Paul Staswick, a plant molecular biologist and jasmonic signaling expert at the University of Nebraska (Staswick was not involved with PNAS paper).

“Potentially, if it holds up in the environment, it could be useful out in the field in crop species and a variety of different plant species,” he adds. “That of course is the big question.”

According to He, another future step is to see if the technique could also be used to make plants resistant to other environmental obstacles such as drought.

“Can you produce a dream plant that can function in any condition? That would be super,” he says. “But that would need a lot of people’s work. That is one of the grand challenges in agriculture—with climate change, with fertile soil being gone, with population increasing, we need a very clever way to grow plants to be resistant to everything.”