National data says substance abuse is on the decline. These charts tell a different story.

National averages hide the counties that desperately need our help. 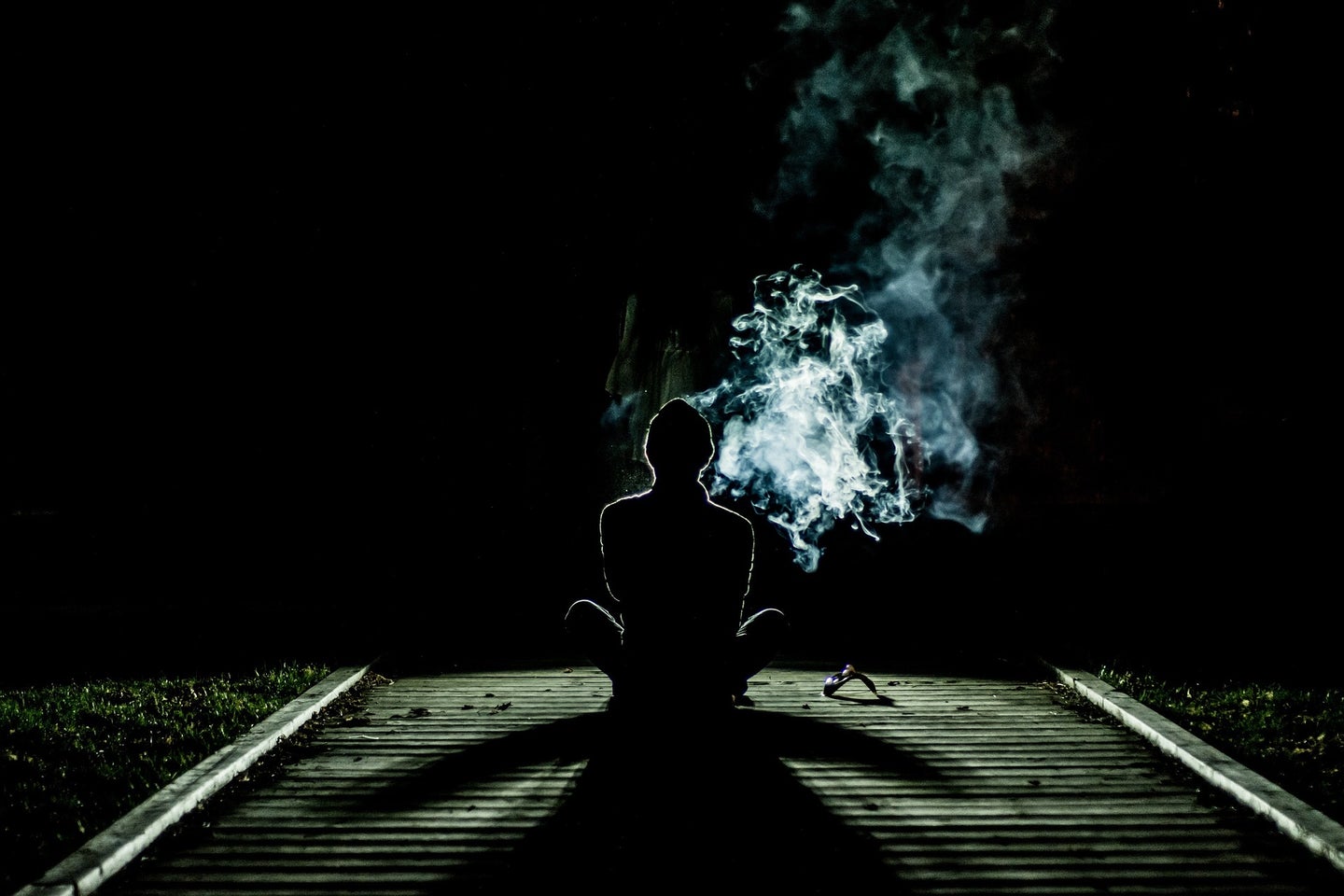 In a country as large as the United States, national averages can quickly lose all meaning. Deaths from alcohol use disorders, for example, have dropped nationally by 8.1 percent since 1980. But in some counties, deaths have doubled in that same timeframe.

The question of why isn’t an easy one to answer. Health data on suicides, drug overdoses, and alcohol abuse are severely lacking. Most studies trying to look at county-level data are from the ’80s and ’90s, so even if policy makers want to figure out where the problem areas are, they don’t have access to sufficiently detailed information. That’s exactly what a new study in the Journal of the American Medical Association aims to fix.

“Progress overall doesn’t mean progress for everyone,” explains Laura Dwyer-Lindgren, an Assistant Professor of Global Health at the Institute for Health Metrics and Evaluation and lead author of the study. “We hope that this research can be used to identify communities that are struggling and highlight where there are opportunities for improving health.”

She and her colleagues painstakingly sorted through 2,848,768 deaths from 1980 to 2014, ensuring was properly catalogued. Many careless errors can find their way into the official record throughout the process of recording a person’s death, and insufficient detail can mask the real cause. Heart failure, for example, is commonly listed as a cause of death. But a preceding string of events could more accurately describe the circumstances of most fatalities. These so-called “garbage codes” can skew the data, so Dwyer-Lindgren and her team had to re-sort thousands of them using algorithms to pull information contained in death certificates and autopsies. More precise codes—like hypertensive versus neonatal heart disease—can reveal substance abuse related deaths that were hiding in the mix.

When they were done, they had a beautiful—and disturbing—set of maps. Age-standardized mortality rate from alcohol use disorders, both sexes, 2014

Though most of the country has fairly low mortality rates from alcohol, many counties are seeing increases, and some are already hard-hit.

Suicide rates trend a little higher, and rates seem to be shooting up in most counties. “Even though mortality rates from suicides declined for the U.S. as a whole from 1980 to 2014, a majority of counties experienced an increase over this period,” Dwyer-Lindgren says. “I found this a pretty striking reminder that what we see at the national level may not reflect what’s going on in many parts of the country.”

The authors note in the paper that “deaths from self-harm were particularly high in regions of the Western United States with high rates of firearm availability and relatively low population density,” and noted that “improved access to effective mental health services, and structural approaches such as means reduction [i.e. erecting barriers on bridges where people commit suicide], should be considered.” Plus, they write, reducing the number of people with drug and alcohol problems would help reduce suicide rates. Perhaps the biggest exception to the rule here: drug use. 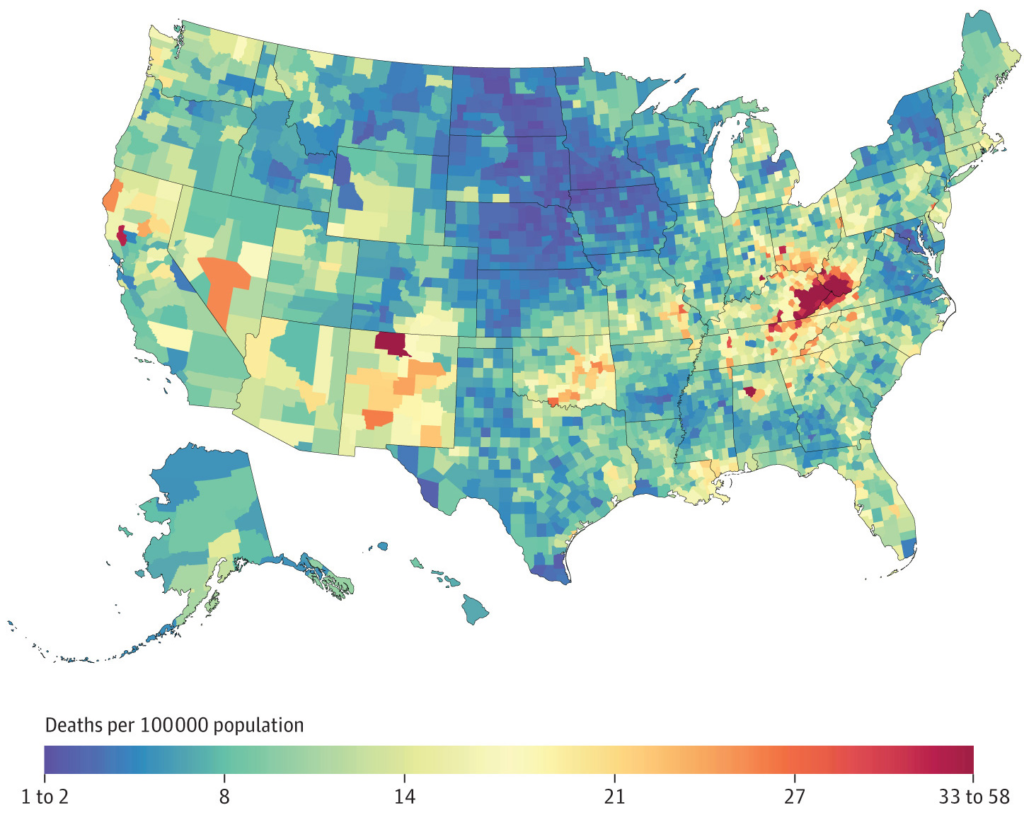 Age-standardized mortality rate from drug use disorders, both sexes, 2014

The map of mortality looks vastly different from the percent change. Not one county has escaped the rising toll of drug abuse, even though a small subset have severe problems already. This was one of the things that stood out most to Dwyer-Lindgren: “Even though drug use disorders increased in every single county, in hardest hit counties there were increases of more than 5000%. That’s a truly remarkable number.”

The only bright spot in the study, if you can call it that, is the data on interpersonal violence. That mortality rate has dropped overall by 44.9 percent since 1980, and over 90 percent of counties saw a decrease. Many of the counties with already-high death tolls seem to be on the decline, too. None of this data presents a solution, but it could be used to make one. Policy makers can no longer use a lack of information as an excuse for ignoring these public health crises. TAnd as Dwyer-Lindgren notes, we’re already losing too many lives to drugs and alcohol: “Substance use disorders and intentional injuries are particularly important because they are preventable, and because they tend to affect younger individuals than many other major causes of death.” Combined, substance use disorders and intentional injuries account for almost 10 percent of all years of life lost in the U.S., despite only comprising 3.9 percent of deaths.

Some of the work we need to do is already in motion. Needle exchanges in towns like Huntington and Charleston, WV, are trying to combat the spread of disease, though are struggling to get funding even as their demand rises. Meanwhile, community members are out on the streets in places like Hedgesville, WV, trying to get addicts into rehab. Some politicians are trying to enlist the federal government’s help.

Not every state has a substance abuse problem like West Virginia’s, but we can’t wait until more counties have epidemics to act.