The virus is coming from inside the house. 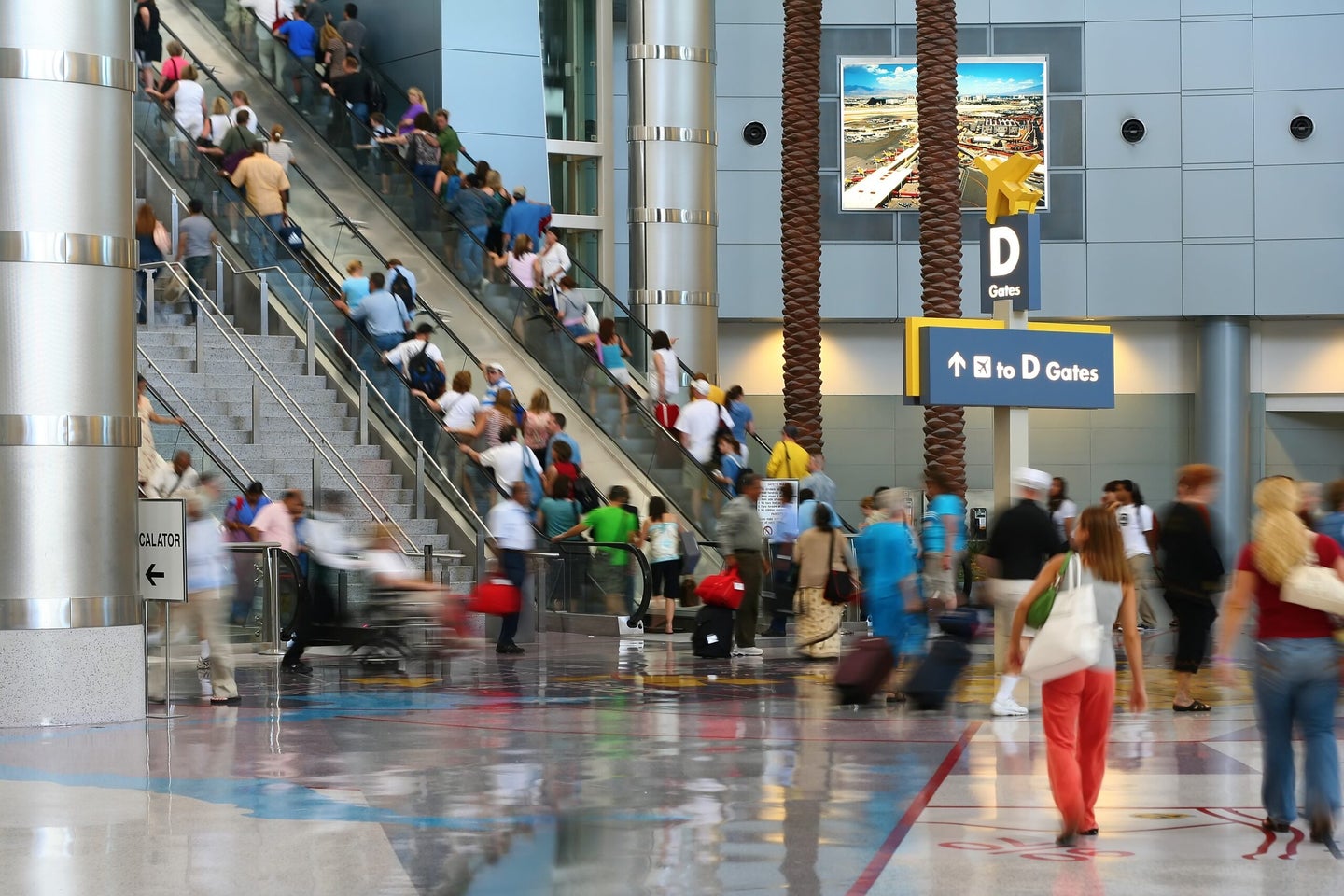 In the days after the 2020 flight bans were announced, passengers rushed onto the final flights. Hannamariah/Deposit Photos
SHARE

Within a day of Omicron’s identification by labs in South Africa, Britain and a handful of European countries announced that they would cancel flights from southern Africa. Over the weekend, the United States followed suit.

But it quickly became clear that South Africa was just the first country to spot the variant and probably not the location that the virus originated. The earliest confirmed case posted on GISAID, a global database of COVID genomes, was on November 19 in Sweden. On Wednesday, the US confirmed its first Omicron case in a traveler who had recently returned from South Africa. That person tested positive the Monday before Thanksgiving. Thursday morning, a man who had visited a convention in New York City also tested positive.

“By the time you close your borders, the variant is already there,” wrote Stefan Baral, an infectious disease epidemiologist at Johns Hopkins’ School of Public Health, on Twitter.

Speaking to PopSci, Baral says that “the way we’ve responded around our borders here is just part of a much broader element of needing to be decisive, to show action. And the idea that you wouldn’t close the border would mean you’re weak.”

The problem with the policy, he says, is “we know better”—previous experience shows that a flight ban won’t keep a variant out.

“People tend to focus on [flight bans], because it’s what governments are using in a crude way, and we’re trying to shift the discussion,” says Kelley Lee, a professor at Simon Fraser University in Canada, and member of the international Pandemics & Borders research group. “Not that borders aren’t important, but it’s how you manage them. So the question is not: Do travel measures work? It’s: Which ones work?”

The policy that the US and other wealthy countries have turned to for COVID was, prior to the pandemic, a “last resort” approach, Lee says.

At the beginning of the 2014 to 2016 Ebola epidemic in the West African nationals of Guinea, Liberia, and Sierra Leone, American politicians quickly called for a ban on flights from the affected countries. At the time, the CDC recommended against such a policy, writing that “many public health professionals cautioned that such a ban would cause greater harm than good.”

One of the studies it cited in that decision, from a team of biosecurity researchers at Johns Hopkins University, wrote that “there is no scientific or even good anecdotal evidence that travel bans have ever been effective at limiting the spread of contagious diseases.”

There have been plenty of opportunities to test the bans in recent history, the study noted. Countries across the world imposed ineffective travel bans in response to influenza and SARS. The US even barred HIV-positive people from receiving visas until 2010, nominally in an effort to slow transmission of a virus that was first identified inside the US.

In the case of Ebola, the researchers wrote, even a travel ban that reduced travelers by 80 percent would “only result in a delay of importation of cases of a few weeks.”

Flights are not the only way people travel, which makes flight bans something of a posture, says Baral. Trucking and shipping has continued throughout most travel restrictions. “Think, oranges in Florida day one, and 22 hours later, a trucker arrives in Ontario with variants and oranges,” he says. “We can pretend these borders are closed, but in the context of how global our society is, the border isn’t really closed.”

Besides, the flight bans are full of exceptions. There’s a grace period of several days before it takes effect. And US citizens can still fly out of South Africa.

In the case of COVID, research from Lee’s group found that initial travel restrictions placed on China slowed transmission out of that country. Jia Kangbai, an Ebola researcher and member of Sierra Leone’s COVID Presidential Task Force, says that there are reasons to think a flight ban would be more useful in the case of COVID than Ebola.

People with Ebola are generally only infectious when they’re very ill. “You have to be releasing bodily fluids which are contaminated with the virus,” he says. And at that point, someone is unlikely to get on a plane, making a flight ban moot.

“In the case of COVID-19, everybody’s a suspect,” says Kangbai. “Somebody walking around presenting as very healthy can be carrying the infection. So we think a ban on flights can be very important.”

“If we had known that South Africa was the country where Omicron came from, we would be able to use an effective traveling ban,” he says. But Omicron already has a toehold across the world. “How can we keep imposing a traveling ban if that’s the case?”

The Biden administration has argued that its flight ban is a way of buying the United States breathing room. “It gives us time,” President Joe Biden said at a Monday press conference.

That could be the effect of the flight ban, says Lee, although it’s not a guarantee. “I guess the idea is to reduce the number of people coming in from what are deemed high risk countries,” she says. “But in the meantime, you should also be screening everybody else to make sure they haven’t passed through Europe.”

Another question is whether a flight ban is worth the cost.

“They’re also punitive,” says Lee. “They can be counterproductive to open disclosure.” CDC officials have praised the South African scientific community for quickly sharing its information on the variant, at the same time as the US has imposed travel bans. And the risk, says Baral, is “that we’ve undermined those relationships in a very decisive way.”

Examples abound of countries minimizing outbreaks to avoid economic repercussions. Lee notes that some countries avoid the word cholera, referring to it instead as “acute watery diarrhea.” We use the term “Spanish Flu” to describe the 1918 influenza largely because countries, including the United States, censored news of the pandemic.

There’s an immediate human risk, too.

During the Ebola epidemic, even though the United States didn’t ban travel to and from West Africa during the epidemic, supply chains were scrambled. Airlines cancelled flights to the affected countries. Container ships that had visited the region were placed in quarantine, and shipping companies cancelled further stops at West African ports in anticipation of a travel ban.

The results were devastating. There were food riots in Monrovia, Liberia’s capital city, while medical supplies were left stranded continents away from the outbreak. “Nine pallets of caps, gowns, boots, and masks are sitting at the JFK airport in New York City awaiting the next available flight to West Africa,” wrote the Humanitarian Response Lab at MIT, which studies supply chains, in 2014.

In an echo of the early COVID pandemic, NPR reported in 2014 that medical workers had begun making their own masks and gowns out of whatever material they could find.

“Medical aid wanted to come in at a most critical time,” says Kangbai. “The bureaucracies that were involved delayed the intervention process, and cost the lives of so many people.”

In the case of COVID, that appears to be happening already. Tulio de Oleivera, the director of South Africa’s Centre for Epidemic Response and Innovation, and a key Omicron researcher, wrote on Twitter that scientists were beginning to run out of lab supplies because of flight bans.

Speaking of colleagues working in the region, Baral says “it’s hard for folks there not to feel like all this is racism. There’s literally nothing to justify this in any other way. There’s [Omicron] cases all over, but they blocked travel to a singular region of the world. It’s astounding.”

In the context of COVID, says Lee, “I don’t think we can ever get enough early information to use [flight bans] in a really targeted way.”

But there are other ways that countries could control the spread of variants. Baral says he doesn’t want to be a “singular voice” giving an answer to what that might look like, but explains that “a traditional public health approach” would have involved gathering a panel of experts and weighing “the different policy options available to us, from doing nothing, which is highly unlikely, to kind of shutting down the world, which I would have also thought was unlikely.”

On Wednesday, the Biden administration signaled another approach to travel policy, though not an immediate end to the flight ban. The CDC said Tuesday night that it would require anyone flying into the US to show a negative COVID test taken within a day of boarding the flight. Currently, it requires a negative test from within three days of the flight for people who are fully vaccinated, and one day otherwise. The current policy allows some rapid tests to be used, and it’s not clear what the upcoming change will require.

Lee doesn’t think that goes far enough. “If you’re a government trying to manage your borders, then you need to get rid of all these exemptions…. You want to test everyone upon arrival.” She thinks that pre-flight tests will remain ineffective, and that the most robust surveillance would involve PCR tests and quarantine after arrival.

In the US, though, the Delta variant is still raging across the Midwest. Hundreds of people are dying every day. “I think what’s most impactful at this point is to say, we understand why people continue to be at risk, and we want to address that,” says Baral. “And we want to minimize the number of new people introducing variants.” But that’s a moot point if we don’t address the conditions—from crowded housing to vaccine access—that allow the virus to keep circulating here.