Worms (And Germs) May Be The Answer To Preventing Allergies 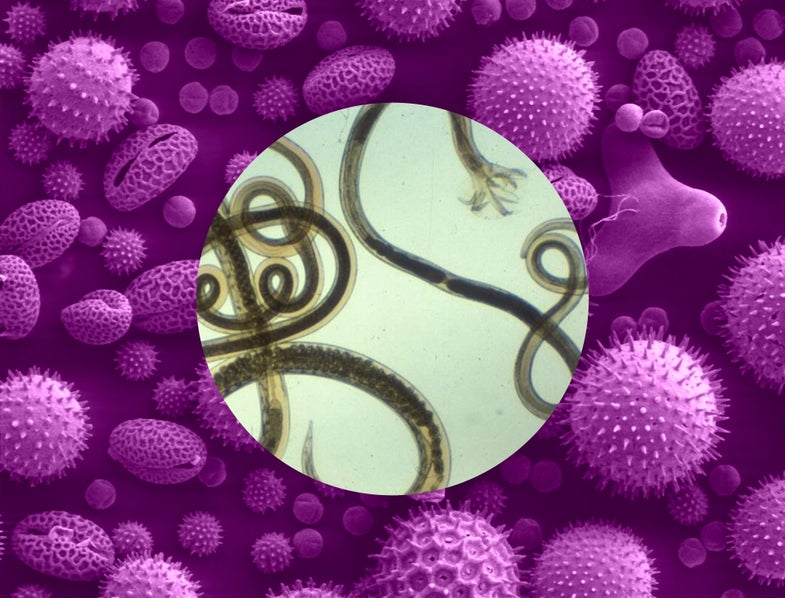 For more than half a century, the focus of an allergic response has been the antibody, Immunoglobulin E (IgE). Upon identification of an allergen, IgE sends signals to the rest of the immune system leading to activation of a variety of cells, such as mast cells, eosinophils, and basophils, the rapid onset of symptoms. Without some form of intervention, such as epinephrine in the most severe cases, the outcome could become bleak.

But IgE is just the trigger. Figuring out how the immune system develops during childhood to allow these antibodies to be produced has led to a much larger picture. The most important risk factor may appear to be exposure to allergens. The higher the exposure to allergens such as dust mites and cockroaches, the greater the likelihood of allergy later in life. Yet, this has been countered by other studies showing a rural lifestyle complete with exposure to all aspects of the environment can reduce the chances of this condition.

An answer to this controversy began to develop in the 1990s with the generation of a theoretical question: what if the reason for allergies isn’t about the allergens but a microbial entity? Epidemiological data had shown a significant difference in allergy prevalence between developed (high) and developing (low) countries. Perhaps low resource nations offered a microbial exposure not seen in the First World. As to that microbe, the answer appeared to be relatively simple: helminths, better known as worms.

Over the next decade, the theory was put to the test and appeared to pan out. For some reason, certain helminth species were able to reduce the burden of allergies and offer protection to those already suffering. The mechanism took more time to develop but eventually was found to be an alteration of the way the immune system reacted to allergens. Instead of severity, the reaction was muted, if not calmed entirely. A similar calming effect was seen in inflammatory diseases.

Venturing further into the mechanism behind the soothing effect, several novel findings were made including the involvement of a particular cell type not usually associated with allergy. It’s known as G-protein coupled Receptor 41 (GPR41). This molecule recognizes a variety of molecules known as short-chain fatty acids (SCFAs) and is involved in energy metabolism. Yet, this molecule can also affect the immune response. When SCFAs are present, inflammation is calmed. But its absence can increase in risk for inflammation and allergic responses.

This finding of GPR41 created a slight problem for the helminth theory. The molecule had little to no association with worms. Instead, it was mainly affected by the presence of gut microbes. They produced the majority of SCFAs and drove any downstream GPR41 pathways. There had been some evidence to suggest gut bacteria also played a role in preventing food allergies but for the most part, the focus had been on inflammatory ailments and neurological dysfunction.

But last week, an international team of researchers revealed a link between GPR41, helminths, and allergies. Their work showed exactly how worms can modulate the immune system to help combat allergies. The study also uncovered how the gut microbes can contribute to improving the effect of helminths.

The group worked with mice for the experiments. The team infected the mice with the worm, Heligmosomoides polygyrus bakeri. To determine the effect of the gut microbiota, some of the mice were pre-treated with antibiotics to remove their presence in the intestines. Blood was also taken from the mice to look for any signs of immunological change both in normal conditions and also when allergies were induced.

When the data came back, the authors were not surprised to see the worms did the job in reducing the severity of allergic induction. Taking a closer look at how this happened, the team found the worms somehow modulated the immune response to be more tolerant of the allergen. They were aided by gut bacteria suggesting they were playing a mutual role.

What did come as a surprise was how the worms altered the bacterial community. When the helminths were in place, they invoked a change in the bacterial makeup, leading to higher levels of friendly bacteria. How this happened wasn’t entirely clear although there was some evidence the worms were producing byproducts that could harm some unfriendly bacterial species.

This study reveals how the combination of worms and gut microbiota can prevent a severe allergic response. Of course, this only applies to mice; translating to humans will require time and more studies. Yet, the potential for a natural form of allergy relief is present and may one day lead to a different type of allergic medication. Instead of chemicals and hormones, all one would need to do is eat some worms.