How to tell when the COVID pandemic is nearing its end

Three numbers for understanding other ways out of a pandemic. 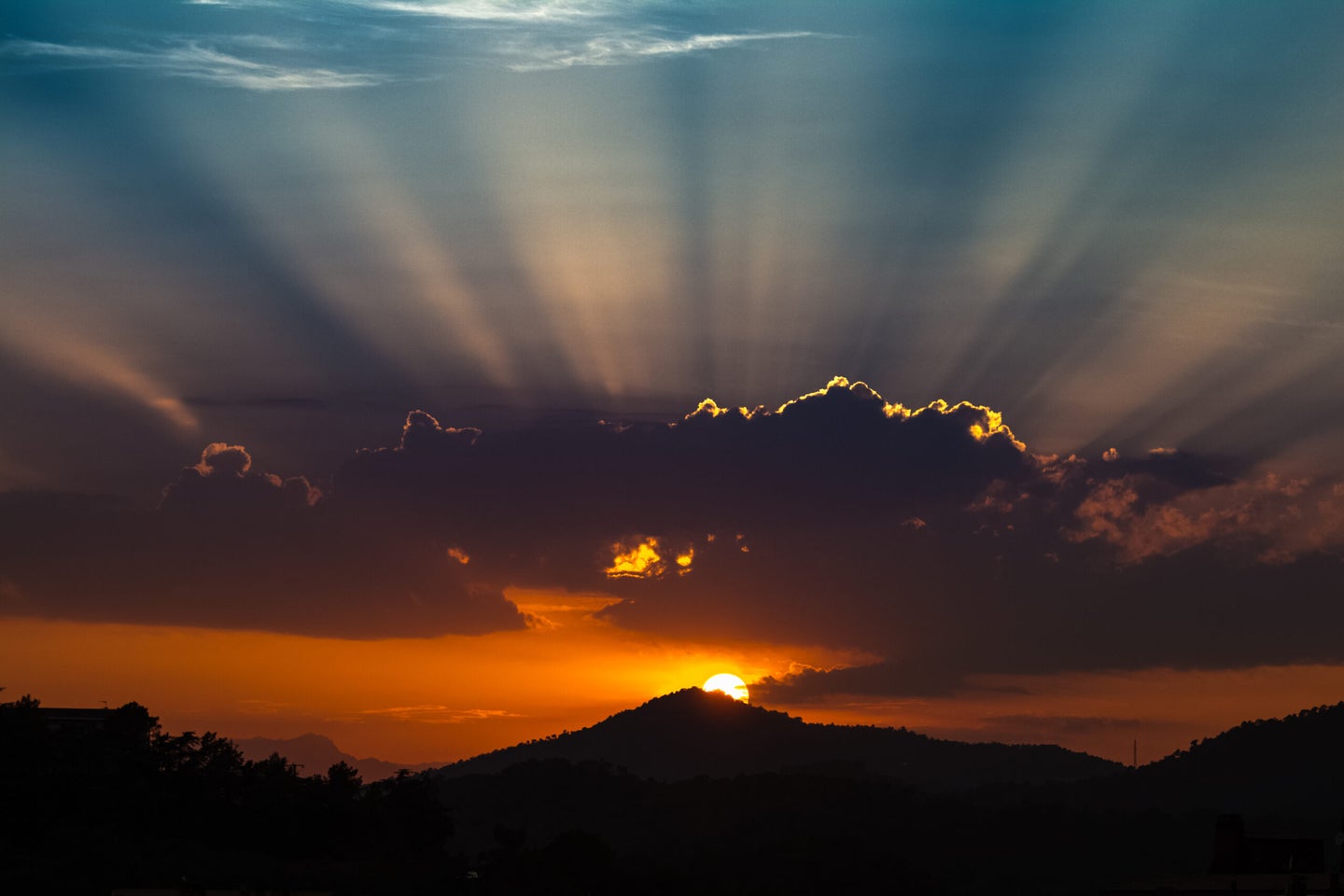 There are ways to end a pandemic beyond herd immunity. Mihtiander/Deposit Photos
SHARE

In a recent interview with the LA Times, Center for Disease Control and Prevention officials stated for the first time that they no longer consider ‘herd immunity’ a goal for COVID-19. This means that the health agency no longer believes that the disease will functionally disappear in the face of high vaccination rates.

To many public health researchers, this didn’t come as a surprise. While vaccines have been miraculously effective in preventing severe illness, they don’t fully stop transmission, especially against the hyperinfective delta variant. That fact, coupled with the high number of people who are choosing not to get vaccinated, means that it’s very unlikely that vaccines will stop the spread of COVID in the way that they have for measles.

“I think it is a realistic [decision] given the obvious inability to eliminate the virus,” says Monica Gandhi, an infectious disease physician at the University of California, San Francisco.

Instead, public health goals will need to be more ambiguous. “We want clean, easy answers, and sometimes they don’t exist,” John Brooks, the CDC’s COVID chief medical officer, told the LA Times. The CDC has not responded to requests for more details, so we asked several experts how they might judge success in a world where COVID never goes away.

As vaccines become more widespread, it’s getting harder to judge the state of the pandemic by the number of reported cases alone—people might still be getting infected, but if they’re recovering quickly, that might not be such a problem. The UK experienced the first glimmers of this in the summer of 2021. Delta caused record increases in new cases, but deaths levelled out quickly.

As a result, one way to measure success might be to simply look at how many people are dying. Gandhi, as well as other observers, like the pediatric vaccine expert Paul Offit, have suggested that we aim to keep COVID at 100 deaths per day in the US—roughly the same number of people who die of the flu, when averaged out over the course of a year.

That’s still a long way off: Currently, more than 1,000 people die of COVID in the US every day, and the daily toll hasn’t been below 100 since the very first days of the pandemic.

However, a number of experts caution that the comparison isn’t perfect. Even if people aren’t dying in high numbers, COVID survivors could potentially have outcomes very different from folks who recover from the flu. “There’s so much we don’t know about the impacts of the disease on a long term basis,” says Andrea Taylor, who leads research on vaccine distribution at Duke University’s Global Health Innovation Center. “We don’t know what kind of long term damage it may do to the respiratory system. People still are experiencing long COVID.”

The flu is a natural comparison, but it’s also not clear if it will be possible to keep COVID at that level without much more aggressive long-term interventions than we rely on for influenza. “I feel like it’s gonna require some sort of readjustment as we figure out what is possible,” says Natalie Dean, an infectious disease modeller at Emory University.

Susan Hassig, an infectious disease epidemiologist at Tulane University, says she suspects the 100 daily deaths threshold or something similar is what the CDC will aim for—but she’s not sure it’s the most morally responsible way forward. “Do I think it’s the right approach? Do I think we should just throw up our hands and give up? No,” she says. Just because we’ve decided that those flu deaths are acceptable, she says, doesn’t mean that we should feel that way about COVID.

650 million doses for the world

Some experts say that the CDC should be focusing on more global goals to ensure the end of the pandemic. If COVID-19 continues to spread rampantly elsewhere, that means more opportunities for the virus to circulate back into the US.

“I think that [US public health officials] need to pivot to pushing as much vaccine to the developing world as possible,” Hassig says. “The best way to protect the United States is to start really supporting vaccination efforts for highly vulnerable populations in Africa and Southwest Asia.”

As long as COVID is raging around the world, new variants can continue to evolve and emerge—including ones capable of reinfecting people who have had COVID before—as happened in Brazil and India.

The WHO has set a goal that 40 percent of people be vaccinated in every country by the end of this year, and 70 percent by the middle of 2022. The United States has endorsed that goal, and has promised to donate more than a billion doses to the effort.

But as things stand, the world is nowhere near hitting the target. Most of Central America, and all but five countries in Africa, aren’t on track to hit that goal. As of late October, only six percent of people living on the continent had been fully vaccinated.

Meeting that need requires 650 million doses on top of what’s already being delivered through donations and international collaborations. According to an analysis by the COVID Gap, a research consortium on COVID inequities, global vaccine manufacturing could already cover that. Instead, it’s a problem of distribution. COVID Gap estimates that even if the United States, Canada, the UK, and the EU ramp up booster campaigns, they will be sitting on a collective 834 extra million doses between them by the end of 2021 alone.

Part of the solution, the COVID Gap analysis argues, is for wealthy countries to simply give up their place in line for shots. The US has already purchased so many vaccines that other countries have to wait for production capacity to open up, even if they have the money available. But there’s a precedent: in late October, the US gave up its spot for 33 million Moderna doses to allow the African Union, a group that represents 55 African governments, to set up a 110 million dose purchase.

More treatments for COVID may also reduce deaths without directly curbing the spread of the disease.

“Another way to think about this is to wait for the two antivirals that are due to be reviewed later this year by the FDA,” says Gandhi, “to say that we have enough prevention and treatment ‘tools’ in our toolbox.”

Those drugs, Merck’s molnupiravir, and Pfizer’s paxlovid, have been found to reduce hospitalization and death by 50 to 90 percent in clinical trials when administered to newly-diagnosed COVID patients. Merck plans to manufacture 10 million courses by the end of 2021, and Pfizer expects to make close to 200,000 more.

Both are expensive compared to vaccines—the US plans to pay $712 per round of molnupiravir at first. But Merck will allow generic drug manufacturers around the world to make the drug and distribute it. (Health equity advocates have pushed for similar agreements for vaccines.) The New York Times reported that prices could fall as low as $20 per treatment in low-income countries.

But they have one pitfall: they need to be given within days of infection, which means that communities need to have widespread access to testing for the therapies to make an impact. “Those things really need to go hand in hand,” says Taylor. “We can’t send out the therapeutics without also increasing diagnostics.”

Globally, that means buying and distributing 988 million tests over the next year. But that’s true at home, too. Test positivity in the US has remained above five percent since July, a signal that not enough people are getting tested. In September, the Biden administration announced that it would buy 300 million rapid tests to distribute to community centers and food banks. But some experts don’t think that goes far enough, and would like to see rapid tests sent to every American home and business. With widely available tests, we might be able to not only get a better handle on outbreaks, but ensure that people get access to treatment while it’s still useful.

It’s not yet clear what route the CDC will take in striving to end the pandemic now that eliminating COVID-19 seems out of reach. But if the country can make a concerted effort to hit one or all of the goals outlined above, a return to normalcy could still be attainable.