Oil Spills: Uncovering A Battle Between Technology and Ecology 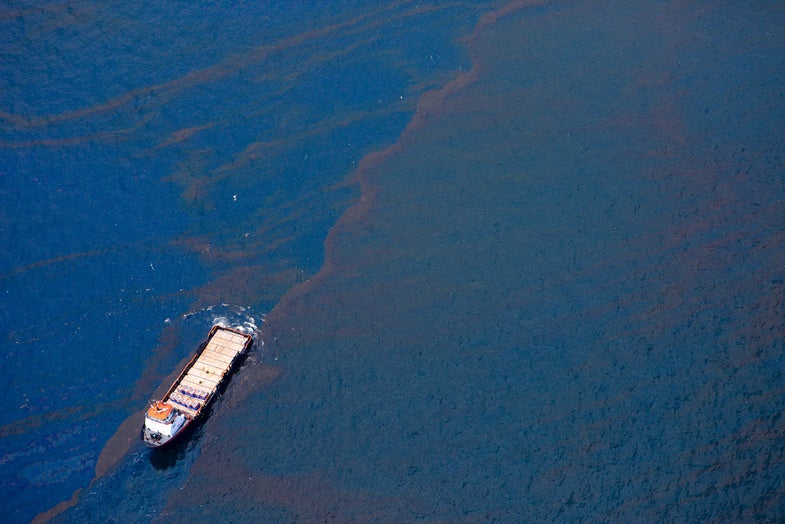 Oil spills are one of our greatest environmental threats. When they occur, a massive cleanup operation is immediately put into place to control the damage. The goal is to ensure all members of the ecological niche are protected both in the short term and into the future.

One of the most commonly used techniques is the application of chemical dispersants. These solvents and detergents are supposed to break down slicks of oil into smaller droplets making them easier for biodegradation by oil-eating microbes. The theory is that together, chemicals and bacteria can improve the situation more quickly than manual collection and restore the environment to its original state.

However, the use of dispersants has been controversial. The chemicals themselves may be toxic to aquatic life. They also may not be effective in promoting biodegradation by oil-eating bacteria. Even as far back as 1974 concerns have been raised over the effect of these chemicals on microbial populations. Yet, in light of some of the greatest spills in history, such as the Exxon Valdez, in 1989 and the more recent Deepwater Horizon spill in the Gulf of Mexico, dispersion has been considered part of the immediate solution with understandably little regard for the long term.

With both spills now long past, the retrospective analyses of the efficacy of dispersion have been undertaken although more attention has been given to the Deepwater Horizon incident. The focus makes sense as the spill released over 180 million gallons of crude oil (in comparison, the Exxon Valdez only released 11 million gallons). During this spill, over 1.8 million gallons of dispersant were used in the hopes of reducing the impact.

In 2011, an examination of the fate of dispersants revealed the chemicals were not entirely effective. They didn’t intermingle well with the oil and ended up being trapped in deep plumes of water where they were essentially ineffective. In 2013, another study suggested the dispersants were effective at sending the oil into the sea thus protecting the shoreline from even greater contamination. Neither of these studies, however, offered any perspective on the effects on the ecological niche nor on the oil-degrading microbial population.

As to the fate of the bacteria, several studies were conducted. In 2011, a shoreline examination of microbial communities confirmed what was already known in 1974; dispersants seemed to interfere with the natural degrading activities of the bacteria. In 2013, a more comprehensive look at the seawater and sediment bacteria revealed a change in population during the spill tending towards higher numbers of hydrocarbon-degrading species. This wasn’t entirely unexpected but there were some surprises as certain populations known for degrading surfactants rather than oil were also found. Although this was never tested further, the results suggested dispersants may alter the population and possibly reduce the levels of oil degraders.

This suggestion may now have been shown to be correct. Last week, an international group of researchers revealed the effect of dispersants on oil-loving bacteria. Much like the hypotheses forty years earlier, the results show the technology interferes with ecology.

The team started their work in 2013, long after the spill had ended. But, they were able to use samples of seawater naturally exposed to oil thanks to a natural seep in the Gulf of Mexico. Once the water was collected, portions were sectioned out for a variety of treatments. Some were left naturally as controls while others were subjected to treatments of oil only, dispersant only; dispersant and oil together; and finally dispersant, oil, and nutrients. Over the course of several weeks, the microbial population was examined as was the ability to break down oil. If any changes were observed, they would be examined at the metabolic level to determine possible causes.

When the testing was complete, the authors confirmed dispersants did change microbial communities at the genus level. For example, one particular microbe, Marinobacter, was highly abundant in the oil alone sample, but couldn’t rise in the samples with dispersant. In another case, Colwellia, which can degrade both oil and surfactants, was found to be highest in samples containing the dispersant.

The results pretty much correlated with the activity of the bacteria in the samples. In oil alone, the high abundance of oil degraders led to excellent bioremediation. In the presence of the dispersants, however, there was no enhancement of action. But this is where a surprise was seen. In some cases, the dispersant led to a significant reduction or ablation of degradation. The surfactant had for some reason shut off the oil-loving characteristics.

Looking further into this, the authors found the reason behind the change was due to alterations in nutrient availability. The Marinobacter could only thrive when they had the oil as the primary nutrient source. The introduction of the dispersant changed the dynamics and as a result, the ability of the bacteria to metabolize oil. On the other hand, the Colwellia were essentially living off the dispersant meaning they could grow quite well while the other groups simply starved.

The authors suggest the use of dispersants may not be as effective as once believed. In the case of the Deepwater Horizon, the microbial population may have been effective at eating up the oil spill. However, the results probably won’t mean the end of dispersant use anytime soon. After all, microbes take time to bring ecology back to normal. In a world where action is required to provide immediate results, the use of a chemical may still be the go-to strategy. Yet, when this option is used, possible efforts to help the bacteria in the long term may ensure the spill isn’t just handled, it’s completely remediated.