The craft will go very fast and may someday transport soldiers into battlefields of the future. 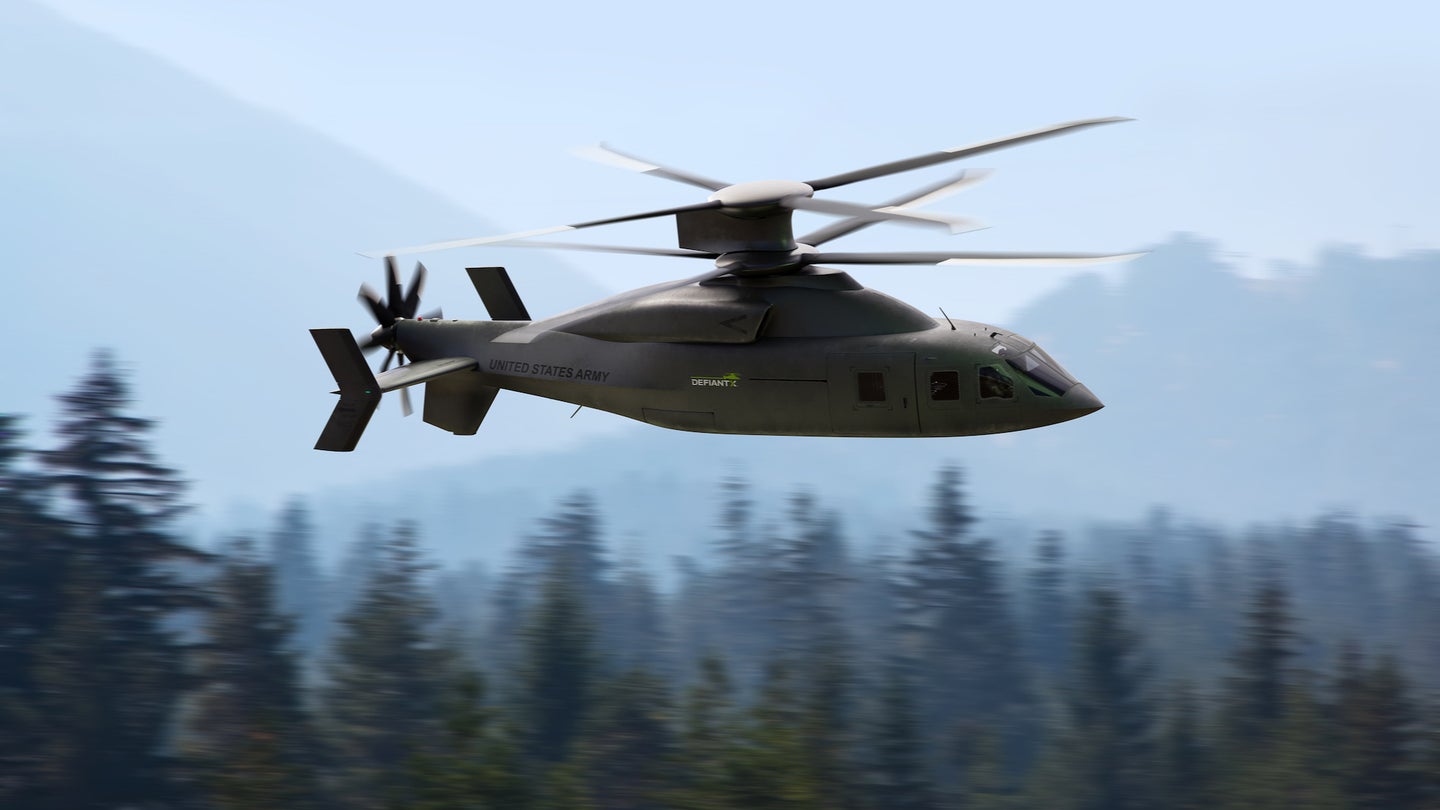 The Defiant X employs two coaxial rotors up top, with a propeller in the back to help it accelerate and decelerate. Sikorsky/Boeing
SHARE

The Defiant X is a sleek, futuristic helicopter that’s designed to go fast and far. While it doesn’t exist as a production aircraft, it’s one of two candidates that could be the new Black-Hawk-type helicopter for the U.S. Army. This machine, which is made by Sikorsky and Boeing, is competing with a rival aircraft from Bell as part of an Army initiative called the Future Long-Range Assault Aircraft program. The winner should be announced in 2022.

Here’s what to know about how the Defiant works, and how the design informs what it should be able to do.

Right away, its appearance sets it apart from a regular helicopter. The most eye-catching feature is at the top, where two stacked rotors spin in opposite directions for maximum lift. This coaxial setup means that the whirlybird doesn’t need a traditional tail rotor, which exists to keep a regular helicopter from spinning around in dizzying circles in response to the motion of that top rotor.

Crucially, the Defiant’s top rotors are rigid enough to prevent them from colliding and causing a disastrous failure. That’s different from the rotor blades at the top of a regular Black Hawk, which has a “fully articulated rotor system—it flaps up, flaps down, leads forward, lags back—so it’s constantly moving, adjusting in the air,” says Jay Macklin, the business development director for Future Vertical Lift at Sikorsky. That’s fine for a Black Hawk, but untenable when it comes to two rotors on top of one another.

That double-rotor setup also solves a problem that is a nerdy—yet fascinating—aerodynamic issue. Picture a regular helicopter cruising quickly through the air. As the top rotor spins, one side of the rotor is traveling forward in the same direction of flight, while the other side is moving backwards, as the blades complete their circle. But the blade moving backwards can run into trouble in the form of reduced lift, since it’s moving in the same direction that the air is as the helicopter flies forward through it. This issue is called a retreating blade stall. In that case, “you’re a victim of physics,” says Macklin, who is also a former Black Hawk pilot. “The faster you go, you create an area of instability on the blade.” But that doesn’t occur with two counter-rotating rotors up top, like the Defiant has.

Since this aircraft would need to quickly deploy troops in an area that might be unfriendly, getting in and out quickly is key. The propeller in the back helps with that; it can push the craft quickly through the air and even help it slow down, too. That allows the craft to accelerate or decelerate without tipping forward or backward as a Black Hawk would; as one of those choppers lands, for example, its nose flares up, and its nose pitches down as it accelerates. Because the Defiant can stay level, it can get into a landing zone quickly, Macklin argues. “You fly up with the prop going, you reverse pitch on the prop, [and] you immediately slow down,” he says, comparing it to the feeling you get when an airliner lands, the jet engines reverse their thrust, and you feel a push forward towards your tray table.

The aircraft is still in the planning phases, so Macklin cautions that the design could change. The initial version of this helicopter, called the SB>1 Defiant, flew for the first time in March of 2019, and Popular Science has also recognized it in its Best of What’s New awards. Sikorsky’s work on coaxial helicopters dates back to a first flight in 2008.

Helicopters are complex machines. The pilot manages controls called the collective, cyclic, and foot pedals, as I once had the chance to try very briefly. With the Defiant, a thumb wheel on the collective allows the aviator to control the speed of the pusher propeller in the back. Despite all this, “it really is fairly easy to fly, to be honest,” Macklin says.

Compared to Black Hawks, this new helicopter should be able to go “twice as far and fast,” according to a press release from Lockheed-Martin, which owns Sikorsky. A Black Hawk cruises in the ballpark 161 to 178 miles per hour, but Sikorsky isn’t saying the precise cruising speed it expects the Defiant to have, although it has hit speeds north of 242 miles per hour already.

The Army will choose one of the candidates in the third quarter of the 2022 fiscal year, according to Jim Thomson, the acting deputy of the Future Vertical Lift Cross-Functional Team. (The formal part of the competition is expected to begin in the third quarter of this fiscal year.) He noted via email that Black Hawks aren’t going anywhere, even after the introduction of a new helicopter: “The UH60 Blackhawk has been the workhorse of Army Aviation for more than 40 years and will be part of the Army’s rotary wing fleet for years to come. The Army will determine the number of Blackhawks to be replaced by FLRAA at an appropriate time in the future.”