Jumping out of planes and operating up north can be stressful, so the Army is studying resiliency. 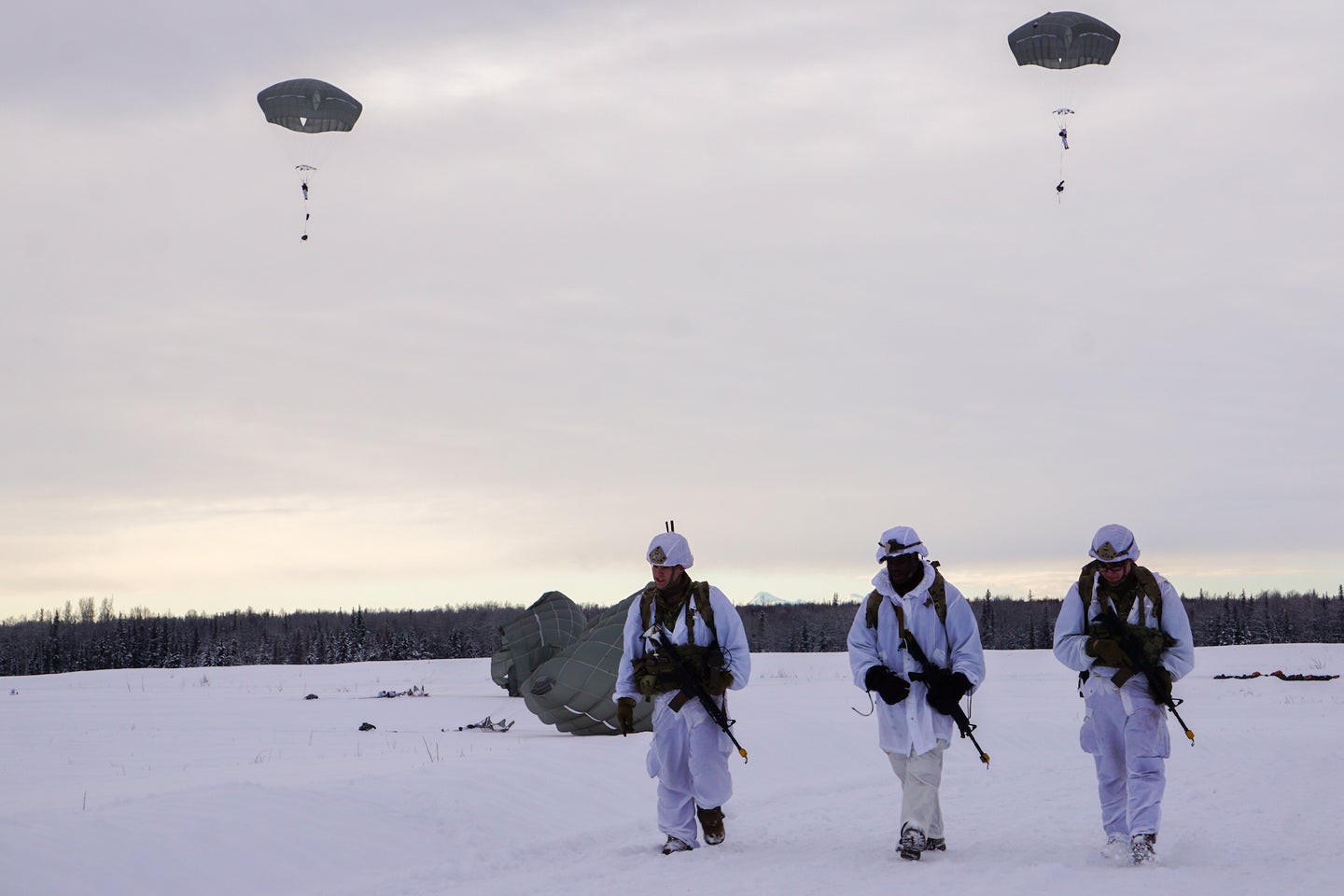 The study includes around 900 paratroopers in the Spartan brigade. Whoop
SHARE

The airborne Army brigade known as the Spartans is based in Anchorage, Alaska. “We jump out of pretty much anything that flies,” says Phil Rank, chief warrant officer with the light infantry brigade. “If it can get in the air, we can get out of it.”

Being a paratrooper in the Army and jumping out of perfectly good airplanes carries with it its own stressors, but the unit’s northern location adds an extra layer. “We don’t have the consistency of light like you do in the lower 48,” Rank observes. “We go through extreme periods of daylight, and extreme periods of darkness.”

These factors make the soldiers in the brigade interesting subjects for a study that the Army is carrying out along with a company that makes fitness trackers, called Whoop, and the University of Queensland in Australia. Some 900 soldiers are wearing fitness bands in an ongoing study that began in January and ends in June.

The purpose of this small additional piece of kit? “What we’re looking to do is to try to map soldiers’ resilience,” Rank says. They’ll be investigating how training, and the environment in which they do it, affects the operators’ bodies in terms of strain and recovery. The idea is that the straps are an objective way to gather data on the stresses the paratroopers feel.

And individual people are going to handle stressors in various ways. In a statement that definitely doesn’t apply to regular folks, Rank observes that “everybody can go on a 10-mile run—how everybody’s body responds to that 10-mile run is going to be different.”

Rank says that soldiers can see their own data, on the smartphone app that accompanies the fitness band, but that the Army doesn’t have access to an individual soldier’s information. The metrics that Army leadership in the unit can see throughout the study “is in an aggregate,” he says.

So what is a Whoop band?

Among the landscape of fitness trackers, the Whoop strap is a unique beast. It’s essentially a sensor package held onto the wrist or bicep by a removable strap. It’s not a smart watch. In fact, it doesn’t have a display, so it won’t tell you the time, your step count, or anything at all if you glance at it. A difficult-to-open clasp tightens it down or loosens it. To charge it, you slide a battery pack on top of it, which you can do when it is still on you.

The gadget also lacks some typical sensors that other devices, like an Apple Watch, have—it has no GPS chip, ability to connect to Wi-Fi, or microphone. Besides a heart-rate sensor, it has an accelerometer and a gyroscope to sense motion. That minimalist spec sheet makes it an attractive option for the military, for tactical reasons. They had to ensure that it is a “non-traceable device,” Rank says. After all, the goal is for the soldiers to wear this as much as possible without becoming locator beacons.

But what the Whoop gizmo does do is slurp up a lot of biometric data, specifically about the heart. It’s taking measurements at a rate of 52 times per second, says Kristen Holmes, the vice president of performance science at Whoop. “It allows us to collect a ton of heartbeats,” she says.

Since the device isn’t doing extraneous stuff like displaying your text messages, it can focus more on just collecting physiological information. “We’re able to provide a very accurate picture on how your body is adapting to external stress,” she says.

The band is looking at data such as heart rate, sleep stages, and heart rate variability, or HRV. That last metric is especially interesting to Whoop—it’s the measurement of the length of time between your heartbeats and how much that interval varies. While you shouldn’t compare this metric with another person’s HRV, a higher number for yourself is better. More variability suggests that you are “more adaptive” to what’s going on around you, Holmes says. And that’s where psychology comes in. “Your psychological stress will appear in your heart rate variability,” she says. If someone experiences a fight with their partner or other trauma, she says, then that might show up in a lower HRV number for that person.

The app that accompanies the device focuses on three major categories: strain, recovery, and sleep. An overview tab reveals metrics such how many calories it thinks you’ve burned so far in the day, and your HRV. Nowhere does it tell you have many steps you’ve taken, because that’s not the point of this wearable.

With this Army study, Holmes says the idea is to try to gather information and then turn that into action. “We’re trying to absolutely use these results to give them a playbook, essentially, to help them understand what strategies they can deploy to mitigate this negative stress accumulation,” she says.

Rank, of the Army, agrees. He’d like the results of the study to create an “accurate roadmap,” he says, that shows the results of the training and stressors on the soldiers. It might reveal big-picture advice like when a training event could have been more intense or perhaps the troops needed more rest.

It’s also a way for soldiers to learn more about how they are doing—although anyone who has ever felt stressed or exhausted knows that you don’t need a wearable to tell you when you’re wiped out. Still, the app will give each soldier who wears one knowledge about their body in the form of cold hard data, and then they can use that to “interact with their leadership,” Rank says. “It’s a much more two-way-communication Army nowadays.”

“It starts to develop a culture in the Army where we’re more adaptive to our surroundings, and more adaptive to our own well-being, and then can communicate that to our leaders to allow them to make decisions on a more effective basis,” he adds. Who knows, maybe the leaders won’t schedule the practice parachute jump when everyone is exhausted and stressed.