Maryland’s Maglev Train Gets First Round Of Federal Funding 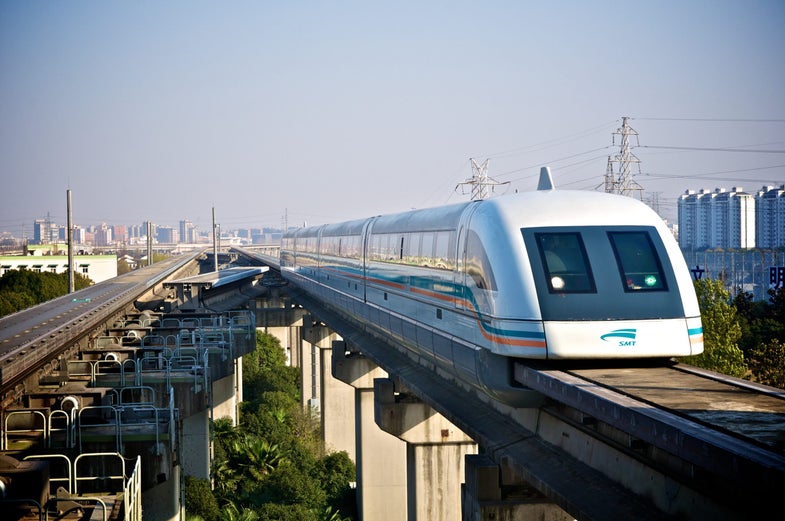 For the past forever, high-speed rail in the United States has existed as a sugarplum dream, sweet to think about, but dissolving instantly upon contact with reality. One of the sweetest and fastest of these dreams is maglev trains, a super-high-speed rail system that already exists in other parts of the world, reaching speeds of 373 miles per hour in Japan. Soon, our high-speed aspirations might become reality thanks to new funding for maglev research here in the United States.

On Saturday, the office of Maryland Governor Larry Hogan announced that the state had received a $27.8 million grant from the U.S. Department of Transportation to assess the feasibility of a superconducting maglev (also known as SCMaglev) train line between Baltimore and Washington DC.

Currently, the trip between Baltimore and Washington DC takes about an hour by car, approximately an hour and 15 minutes by commuter rail, and 40 minutes via the only current high-speed option, the Acela Express. A new maglev route could reduce that down to 15 minutes.

“The ability to travel between Baltimore and Washington, D.C. in only 15 minutes will be absolutely transformative, not just for these two cities, but for our entire state,” Hogan said in a statement. “This grant will go a long way in helping us determine our next steps in this transportation and economic development opportunity.”

$27.8 million may seem like a lot, but it’s just a drop in the bucket. The final cost of such a project is still unknown, but Hogan and the Baltimore-Washington Rapid Rail group, which is leading the project, expect to receive a lot more funding from private donors and the Japanese government, which already has maglev trains in use. Last April, Japan pledged to fund half of the anticipated $9.75 billion cost of the project, and license the maglev technology at no cost to the United States.

Maglev is short for magnetic levitation. A maglev train hovers above the tracks, suspended by magnets embedded in the track repelling magnets onboard. The lack of contact between the train and the track means that the train can fly between cities at ridiculously high speeds, without any friction to hold it back. There are other high-speed rail options, like the Acela, which can technically reach speeds of 150 miles per hour on conventional rails, but usually travels at speeds of 64 miles per hour.

The ride on existing maglev trains is smooth and exceedingly quick, but that doesn’t mean that there are no downsides. There have been a few crashes, and maglev technology is very expensive. The cost of building a completely new infrastructure system is so high that it is hard to muster the political will to push big projects through. In 2011, Vice President Biden pledged that over the next six years, the United States government would invest $53 billion in high speed rail. That was four years ago. Between 2009 and 2014, the United States dedicated a grand total of $11 billion to high speed rail projects, which is a lot, but nowhere near $53 billion, even with the new $27.8 million grant. There are some private companies trying to step in and fill the high-speed void, but whether they get very far remains to be seen.

Here at Popular Science we’ve been writing about maglev trains since 1973, and there are some very cool possibilities for the technology, including trains across the Atlantic, trains to space, and even maglev elevator cars. A train between Baltimore and DC? It’s a good place to start.