The newest concepts from Bell are machines that can take off and land like helicopters—and then zoom at jet-like speeds. 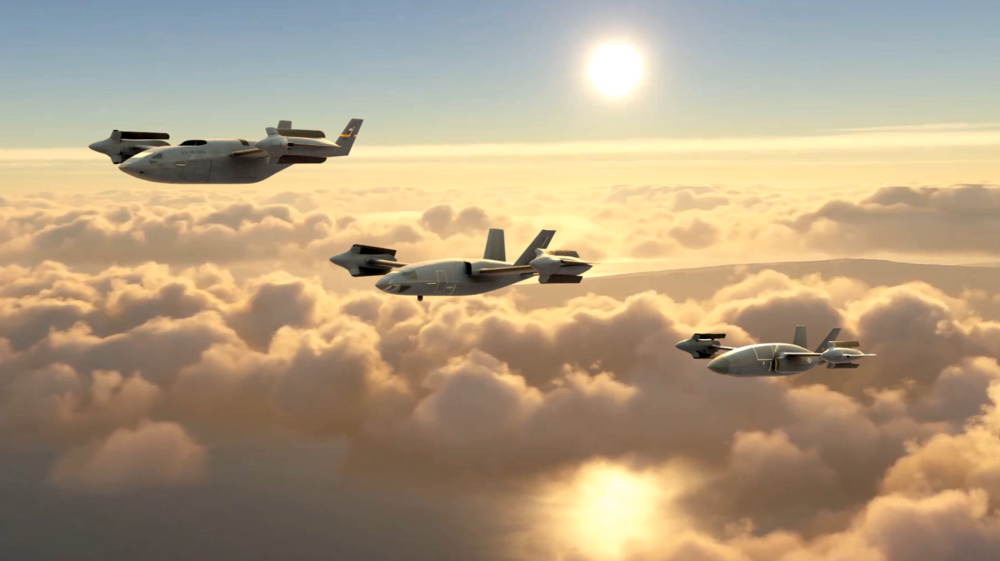 The three aircraft concepts from Bell include rotors that would fold down flat for flight under jet power. Bell
SHARE

The latest concepts from aircraft-maker Bell, released on Monday, are hybrid flying machines that promise to take off and land like helicopters and then zoom around at high speeds like jets. The three new designs include a small, autonomous fighter-jet-like airplane that could land like a helicopter, pick someone up, and then whisk them away.

These are just concepts, so there’s no promise they’ll see the light of day. Still, the ideas are worth exploring for what they telegraph about the future of military aviation, perhaps in the 2030s.

Here’s what to know about these futuristic flying machines.

Aircraft come in a few general categories. Planes ranging from a small Cessna to a giant Boeing 747 are known as fixed-wing aircraft, and feature propellers or jet engines to give them thrust. They need runways to take off and land. Then there are helicopters, which have impressive maneuverability: they can lift off and touch down vertically, and can hover in place to execute a task like plucking someone out of the ocean. Think of the whirleybird’s top rotor as a spinning wing.

In another category are fascinating machines called tilt-rotor aircraft, like the V-22 Osprey and the V-280 Valor. The former is in use by the Marines; the latter is a candidate to replace the Army’s Black Hawk. These planes have fixed wings, but the rotors—one on each wing—can change their orientation to allow them to take off like a helicopter but then fly quickly through the air, more or less like a regular propeller plane.

Blending aircraft types for a new type of flying machine

The new Bell concepts blend these categories, combining a tilt-rotor aircraft with a jet. The idea is that not only would they be helicopter-like, they could also be very fast. (The F-35B is a craft with a related skill set.)

“They take modern tilt-rotor technology as its base capability,” says Jeff Nissen, a senior manager for advanced technology at Bell. “And what we’re doing with these aircraft is adding propulsion technology, or rotor technology, to allow it to go to the next-level flight.”

These craft would be faster and have a longer range than a tilt-rotor; tilt-rotors themselves beat out conventional helicopters in those metrics, too. The new designs could hypothetically surpasse 460 miles per hour, while a tiltrotor like the V-280 has flown faster than about 345 mph. Because they’re so fast, they’re called high-speed vertical take-off and landing aircraft, or HSVTOLs.

Bell plans to accomplish these high speeds and helicopter-like abilities by employing a fusion of different design choices. The trick partially involves the rotors themselves, which in existing craft are already able to change their orientation depending on whether it’s taking off or flying forward normally. But on these new machines, the rotors would move their position one more time: by stopping their spinning and folding back flat. “They’re tucked in,” he says, and would lie against the nacelles they’re attached to. Scrutinize the image up top, and you’ll see that each concept aircraft has nacelles at the tips of their wings, and motionless rotors are folded down upon them. (Of course, adding those additional moves—folding the rotors back and engaging the jet power—adds layers of complexity and possibilities for failure to an already complicated machine.)

With those rotors folded back flat, the crafts become powered by jet engines. “In order to stay in the air, we’ve got to have jet thrust,” Nissen says.

All of this means that the new concepts resemble what would happen if you put a helicopter, a tilt-rotor aircraft, and a fighter jet into an enormous blender together. If the new contraptions had a bumper sticker, Nissen says, it would be “speed that a tiltrotor can’t achieve.”

The possible missions for these high-speed VTOLs

The image that Bell released reveals three size options for these military craft. A light, or small one, in the bottom right; a medium-sized machine in the middle, and a large one up top.

The small vehicle wouldn’t have a pilot, so it would be autonomous, like one of the drones the Air Force could use in its Skyborg program. This uncrewed aircraft could carry out intelligence, surveillance, and reconnaissance missions, and could also deploy weapons. But the most interesting use case is that, according to Bell, it could pick someone up and rescue them. Nissen says that even though it would have no pilot, the craft could still hold “a couple” of people. That means it could hypothetically fly somewhere, land vertically without a runway, and allow someone, like a pilot who has been shot down, to climb on board. “It shows up, and it’s a robot there to pick you up,” he says.

The other two concepts are designed to be flown by people, and are “more traditional,” Nissen says. (And keep in mind that these designs may never actually get out of the design stage and take to the sky.) The biggest one would be larger than a V-22 Osprey, which is about 57 feet long and 84 feet wide, and the medium craft would be roughly Osprey-sized. That largest one would carry “big stuff,” many people, and venture “into places they’re not supposed to,” Nissen says.