What’s it’s like to fly an 11,500-pound experimental helicopter (with zero experience)

The tablet attached to my leg—and the former Coast Guard pilot by my side—helped. 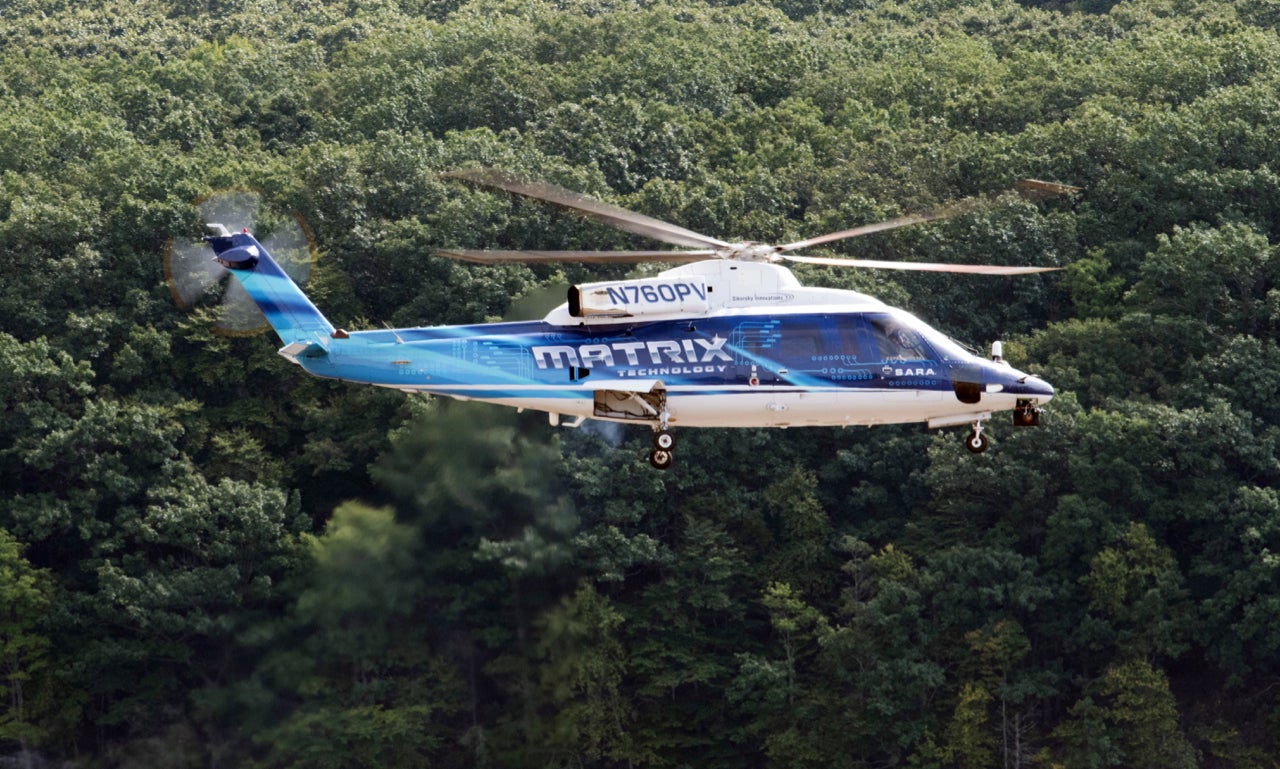 We’re hovering over the tarmac in a large helicopter. Mark Ward, a former commander in the Coast Guard, is on my left, giving me a brief, real-time lesson in how to fly a chopper—a 5.8-ton, multi-million-dollar flying machine that, incredibly, I get to operate the old-fashioned way.

It’s early September, and the treeline along the Housatonic River by the flight field in Stratford, Connecticut, is still green. The cockpit holds a wealth of screens, switches, buttons, and gauges, but I only need to focus on three key controls: the rudder pedals at my feet, a lever called the collective to my left, and a stick known as the cyclic between my knees.

Those are the basic controls that any helicopter pilot must master, and I’m certainly no pilot. But Ward is. He flew search and rescue HH-60J helicopters before joining Sikorsky, the company that makes the experimental, highly-customized chopper that’s letting us defy gravity right now.

The lesson lasts only about five minutes. First I try out those rudder pedals. Pushing down on the left or right pedal makes the machine’s nose swing left or right as my inputs tweak what the tail rotor is doing. Then, I try out the collective, which changes the angle of attack that the spinning rotors over our heads have, letting the bird climb up or drop down. Finally, the cyclic permits me to push the helicopter sideways to the left or right, or move forward or backwards. Eventually, I’m using all three controls at the same time. Ward tells me what to do over the comms system throughout the course as we drift over the flight field. When it wraps up, he uses the controls on his side of the cockpit to land us, and we fist bump.

The lesson gave me a tiny taste of what flying a helicopter is actually like, and it’s challenging. Just learning how to hover takes about 12 hours in the sky, as opposed to my five-minute crash course in this S-76B aircraft. Hovering, Ward tells me, is similar to balancing atop a beach ball: Any moves you make—such as sliding to the left or right—need to be carefully compensated with using the other controls, like adjusting your altitude or the direction of the nose.

But there’s something very different about this helicopter. In addition to those traditional mechanical controls, it boasts a wing-shaped input device for your left hand that makes the chopper go up and down, and a joystick on the far right for moving horizontally in all four directions. Sikorsky refers to those simplified controls as inceptors. When you use them, you don’t need to know how to physically fly a helicopter the traditional way, because they’re hooked into the craft’s computerized motion planning system. Regular flying requires myriad corrections and adjustments to the controls, as I just experienced first-hand; this system lets you just tell it what to do.

I also had a tablet attached to my right leg that, like those inceptors, connected to the computing power in the rear of the aircraft.

There’s a reason the word “experimental” appears in capital letters on the side of this aircraft. This helicopter—SARA, or Sikorsky Autonomous Research Aircraft—is a sandbox for playing with an autonomy and pilot assistance system for commercial and military helicopters. On one level, the inceptors make it possible for a non-pilot to operate the craft. On another, the helicopter can carry out a mission simply through the commands a person taps into a tablet. A flat-screen-equipped command center in a Winnebago on the ground also allows Sikorsky’s ground staff to tell the helicopter what to do. All told, that makes for multiple means of controlling and interacting with one innovative and unique 11,500-pound aircraft.

The exterior of this particular S-76B is different, too. Radar and lidar sensors on the outside offer the machine a comprehensive picture of the world around it. That’s a world of information compared to what most helicopters have: a single radar altimeter, or “radalt,” that just measures altitude above the ground. With the extra sensors, the chopper can avoid objects like a truck on its landing pad or a hill obscured by fog, says Igor Cherepinsky, Sikorsky’s director of autonomy. “Humans should not be flying perfectly good aircraft into terrain obstacles,” he notes.

All this technology is intended to provide assistance for aviators, so they can focus more on the mission than the act of flying. “Pilots are going to become flight-path managers,” Cherepinsky says.

Through SARA, Sikorsky can figure out how they might incorporate technology like this into production helicopters going forward. For example, if they adapt it for military helicopters—Sikorsky makes Black Hawks for the Army and has been working on configuring one with a similar system—then it might be set so the pilots always have ultimate control, no matter what. For commercial helicopters, or maybe even a world with flying taxis, it might be flipped: The system could always have complete control. Think of it as an autonomous car that can be completely driven by a human, assist that person as they drive in some way, or take them somewhere on its own so they can stare at Google Maps or make a call.

Before my flight lesson, I spent my time in the sky with Ward directing the bird with the inceptors and tablet, not the classic sticks-and-pedals method. After training in the Winnebago, we climb into the chopper, and Ward fires up the two Pratt & Whitney engines so that the four 44-foot-diameter blades start spinning. We taxi and eventually lift off the cracked tarmac. In the air, I practice using those video-game-like inceptor controls: a small grey wheel on the left inceptor lets me change the orientation of the ship’s nose with just my thumb, and the joystick on the starboard side lets me slide the chopper left and right. At one point, staff in the Winnebago on the ground below take over control, too.

Next, I load up a program on the tablet, and we fly over the winding Housatonic, cruising north some eight to ten miles. Once there, I use the joystick to fly us in circles high above a small pond, before reverting to the tablet again to tell it to take us home. We land, then Ward engages the mechanical controls to get us in the air one last time and lets me try briefly hovering for real. All told, I’m in the helicopter for about an hour.

The system as a whole isn’t perfect—the tablet interface could be more intuitive, and I got a “whoa” feeling at least once in response to the chopper’s motion through the air as the autonomy system was flying. And while the inceptors are far easier to use than the real controls, they still demand that you learn how your input causes actual changes to the bird’s direction. But perfect isn’t the point. This is, after all, an experiment to explore how the relationship between air crews and their helicopters—big, complex, dynamic machines—might change in the future.

This story was originally published on November 5, 2019.