The Defiant is a candidate to be the next Black Hawk. It recently traveled away from its testing site in Florida to Tennessee. 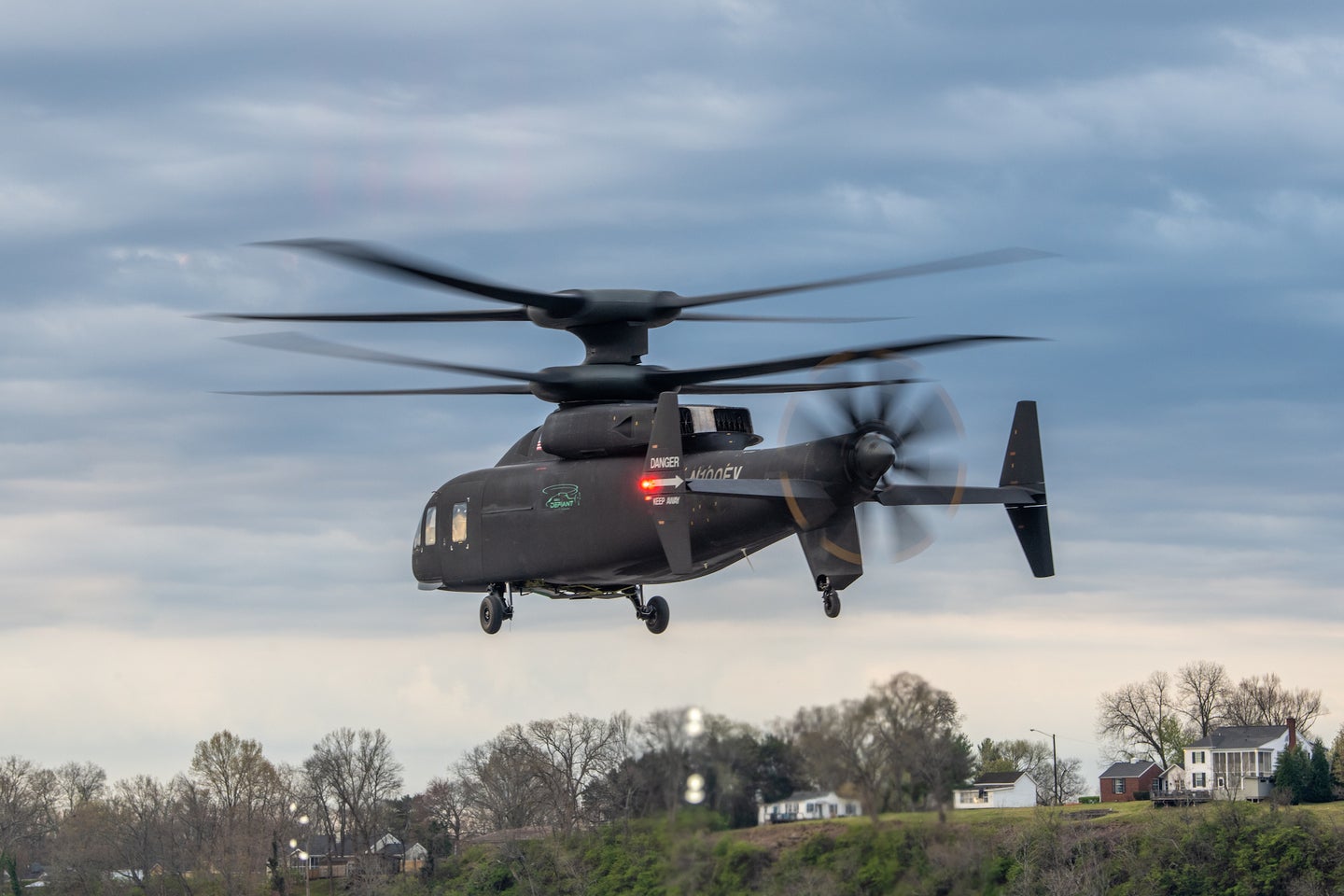 The demonstrator aircraft for the Defiant X program is called the SB>1 Defiant. It flew from Florida to Tennessee on March 21. Sikorsky
SHARE

Last week, a fascinating experimental helicopter from Sikorsky and Boeing made its longest flight yet: It flew from West Palm Beach, Florida to Nashville, Tennessee—a distance of some 805 miles. The two companies behind the futuristic chopper announced the March 21 flight in a press briefing today, saying it was the first time that this helicopter had traveled out of Florida, where all its previous testing had taken place.

The whirlybird flew at an average speed of some 200 mph for the journey, and had to make a couple fuel stops along the way. “It really behaved flawlessly,” Paul Lemmo, Sikorsky’s president, said. “There were no issues. Fuel burn was less than what we expected.”

The helicopter in question is called Defiant, and it’s a unique-looking bird. The most noticeable difference between it and a regular helicopter is the fact that it has two large rotors up top. One rotor spins in one direction, and the other spins the opposite way: they counterrotate. Then, in the back of the helicopter is a propeller that can help the aircraft speed up or slow down. It flew for the first time three years ago, in March of 2019.

Sikorsky and Boeing hope that the Army chooses this flying machine to be its next Black-Hawk-type aircraft, as it’s a candidate in a program called FLRAA, which stands for Future Long-Range Assault Aircraft. Defiant’s competition comes from Bell, whose entry into the showdown is called the V-280 Valor. Unlike the Defiant, the V-280 is a tiltrotor aircraft, meaning that large rotors on the craft’s wings can pivot to allow the craft to fly like a plane or land like a helicopter. The Army will likely decide this year which option it wants to buy.

Sikorsky and Boeing also emphasized a survivability feature that the Defiant has baked into its design. That feature pertains to the fact that the spinning contraption in the back of it is a propeller, not a traditional tail rotor like you’d see on most any other helicopter. On a regular helicopter, the tail rotor exists as an anti-torque system: It cancels out the torque created by the main rotor, so that the aircraft does not spin in circles. But on a coaxial helicopter like the Defiant, the two big counter-rotating rotors up top play that important role, and don’t need any assistance from what’s happening in the rear of the helicopter to keep flying straight. “That [rear propeller] is simply for speed, but if that were to be damaged and inoperable, the helicopter could still fly safely back home,” Lemmo said.

What that means is that if the back propulser was “shot off” or otherwise made inoperable, the helicopter would be okay, Lemmo added.

Sikorsky has previously boasted about the Defiant’s capabilities, such as hitting a speed of 236 knots (272 mph) last year, and turning at 60-degree angles of bank, moments highlighted in a January video. The company notes that it has gone faster than that, hitting 247 knots (284 mph) last year. The craft’s competition, the V-280 Valor from Bell, has hit speeds faster than that due to the fact that it functions similarly to an airplane in forward flight.

In February, Sikorsky and DARPA announced that they had flown a specially configured Black Hawk helicopter for the first time without a single person onboard. They say that autonomy could figure into the Defiant’s toolbox as well. “Our offering will be fully equipped to have autonomous capabilities,” Lemmo said.

Two pilots flew the Defiant prototype for the roughly 800 miles from Florida to Tennessee so that it could be on display at an upcoming annual summit in Nashville run by the Army Aviation Association of America. (While the broader Defiant program is called Defiant X, the specific demonstrator aircraft is called SB>1 Defiant.) The companies say that before they made the decision to fly the experimental SB>1 Defiant for the long journey, it had to be evaluated by safety review boards at both Sikorsky-Lockheed Martin and Boeing. “This particular flight obviously passed both of those boards,” said Mark Cherry, the vice president of general manager of the vertical lift division at Boeing, “in terms of coming to the conclusion that it was safe to fly.”