Check out the progress on 360 Invictus, a candidate to be the Army's next armed scout. Here's how it works. 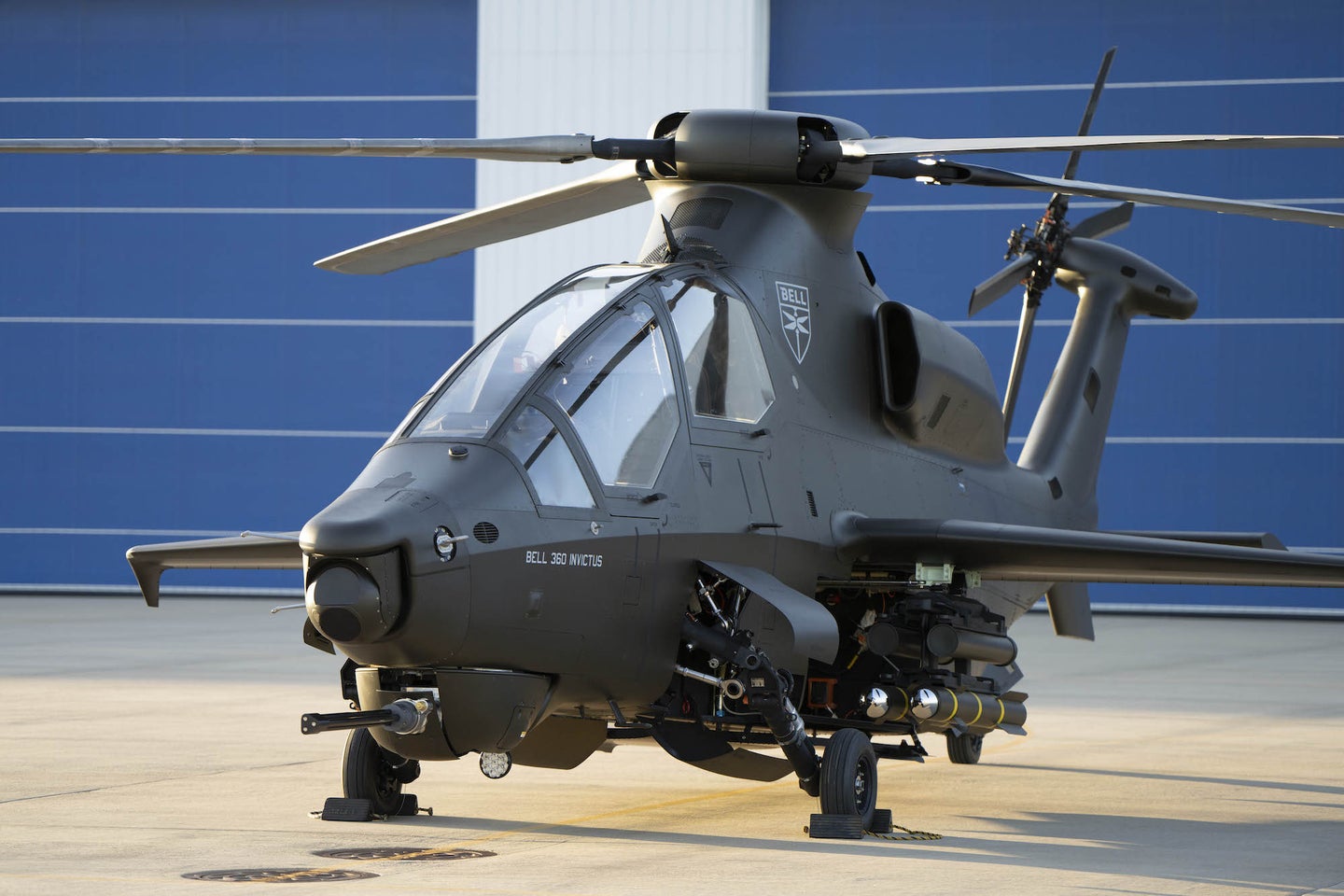 A traditional airplane gets the lift it needs to stay in the air from its wings. A helicopter, meanwhile, has large spinning rotor blades on top that provide lift, allowing it to do fantastic things, such as hover over the ocean and rescue someone at sea.

But a sleek new prototype from Bell partially fuses these concepts together, giving its new military helicopter a detachable wing that can help it achieve fast speeds of around 180 to 200 knots (207 – 230 mph).

Bell’s aircraft, called the 360 Invictus, is a candidate to be the US Army’s next armed reconnaissance helicopter. It’s competing directly against an aircraft from Sikorsky, called the Raider X. Both competitors’ prototypes are part of an Army program called FARA, which stands for Future Attack Reconnaissance Aircraft.

Bells says that their prototype is more than 90 percent complete. The design features a tandem construction, so pilots could fly it from the front seat or the rear. “It’s very narrow,” says Chris Gehler, the director for the 360 Invictus program at Bell. That, plus retractable landing gear and retractable weapons pylons, help reduce the helicopter’s drag.

Here’s what to know about how this aircraft works.

Protruding from each side of the helicopter’s narrow body is a wing. That wing measures about 7.5 to 8 feet out from each side, Gehler says.

A typical helicopter does not have a wing like this. But there’s a reason why Bell chose to incorporate it in their design, and that’s because the Army would like this bird to be able to travel fast, at speeds north of 160 knots (184 mph) or so. When a helicopter tries to go very quickly, a phenomenon called retreating blade stall becomes a concern. As the whirlybird cruises forward through the air, and the rotors up top are spinning around in circles, at any given time one of the rotor blades is moving against the flow of oncoming air, and one is moving with the air, as it retreats compared to the helicopter’s direction of flight. That can affect how much lift the rotor blades produce at any given position. (This same issue is why Sikorsky’s design has two top rotors that spin in opposite directions.)

“You get into a dissimilar lift situation, where the advancing blade is producing more lift than the retreating blade, and you get out of balance, and it becomes an unstable situation,” Gehler says. He notes that it tends to become an issue when the rotor blades are spinning fast enough that the tips’ speeds approach the sound barrier.

That’s where the “lift-sharing wing” helps, says Gehler. It assists when the helicopter passes the 160-knot threshold, and at that point, it provides about 30 percent of the lift that the aircraft needs. Because the wing is giving that extra lift, the helicopter can automatically slow down the speed at which the rotor is spinning, avoiding that blade-stall issue. While the Invictus itself would still be traveling quickly, the rotor blades themselves would be slowed down enough to keep them at a safe speed. (Another factor is the angle at which the rotor blades bite into the air, and thanks to the help of the wing, the Invictus’ retreating blade can be positioned with a lower angle of attack.)

The design of the Invictus and its wings features another trick: They are partially removable. While the initial 3.5 feet or so of them are permanently attached to the aircraft, the remaining 4 feet or so can be taken off. If a helicopter crew doesn’t anticipate that their mission would involve high speeds, removing the wing tips in advance would save weight. Also, detaching those wing tips when needed could help the aircraft’s hover performance, because “there’s a little bit of penalty in hover” with having the wing there in the first place, Gehler notes.

An aircraft with 1.25 engines

Whichever aircraft the Army eventually chooses to go with—and that’s a decision the Army said it will make in fiscal year 2025—the engine it uses has already been determined. That power plant is called the GE T901.

But Bell has decided to accompany that engine with another onboard machine—a supplementary power unit, or SPU. This smaller engine is like an auxiliary power unit (more on how APUs work here), which play a key role in getting aircraft started. On the Bell design, Gehler notes that the SPU can also act as an additional engine during flight to help actually power those top rotors. First, they use this engine to get the helicopter started, like a normal APU. “But we clutch it into the drive system, and that allows us to provide power into the drive system at a hover, at high speed, at any time the pilot might need it,” he says.

This power plant burns jet fuel, like the main engine does, and can produce in the ballpark of 600 to 900 horsepower. The main GE-made engine will be 3,000-shaft horsepower. Between the main engine and the SPU, this aircraft can be thought of as a 1.25-engine machine, Gehler says.

The SPU can also help out if the main engine fails and the pilots need to make an emergency landing. “The supplemental power unit would kick in, and drive the rotor system to enable a softer landing approach,” he says. To be sure, it’s not powerful enough to keep the bird totally flying, but it would help “to give the pilot more time, and more options to land safely.”

Like Sikorsky’s option, this prototype from Bell has not flown yet, because it needs that main engine to do so. Gehler expects the Invictus to first fly in the fall of 2023; it should be a couple years after that before the Army decides which option to select. Finally, don’t confuse the FARA program with another one called FLRAA, which also has Bell and Sikorsky competing with two different, larger aircraft.

Take a look around the Invictus design in the video, below: