Getting rescued by helicopter has risks. This gadget could make it safer.

Small electric thrusters can help stop a litter from spinning out of control. 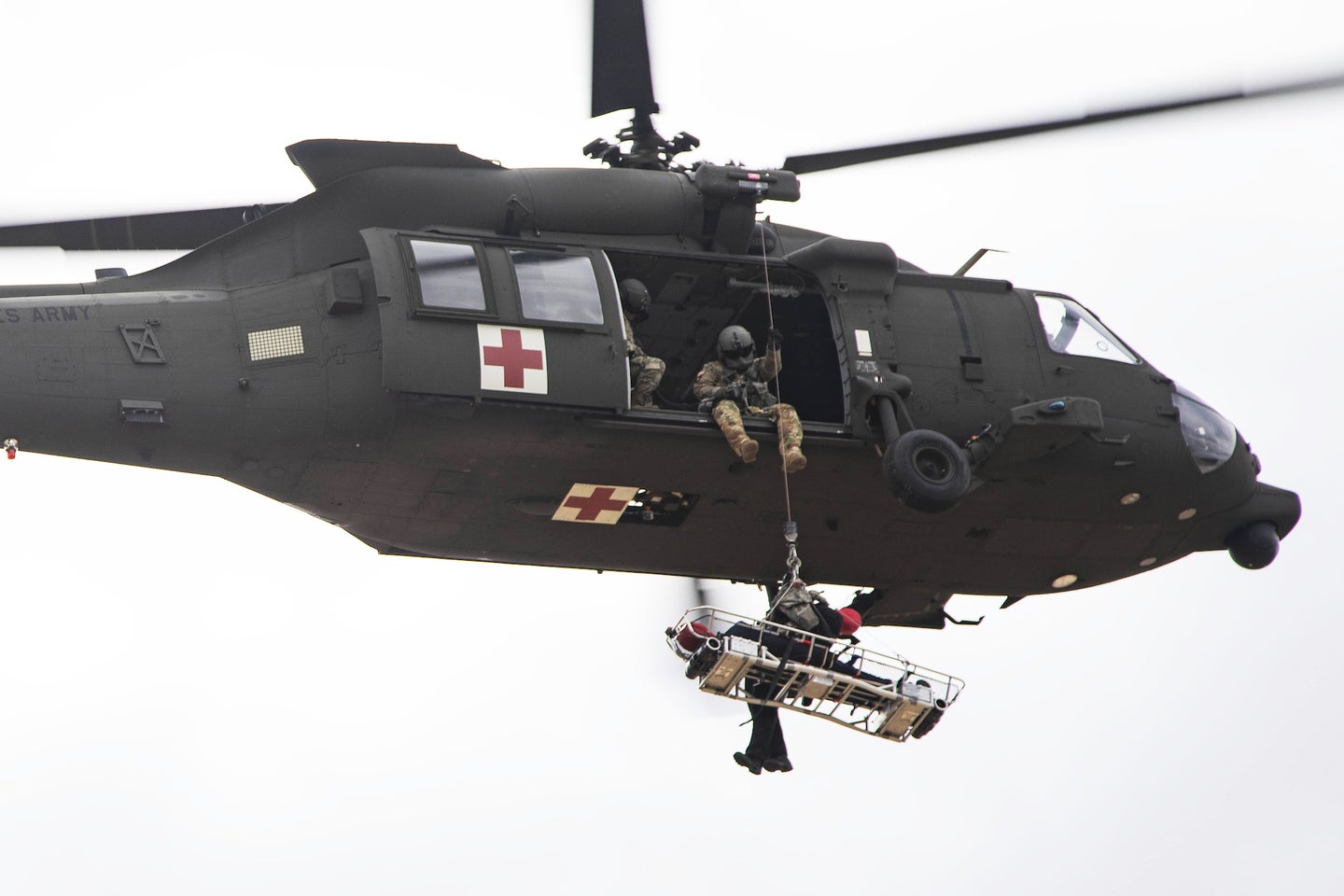 The litter stabilization system, in this configuration, consists of two units, one at each end of the rescue basket. Scott C Childress / U.S. Army
SHARE

When Caleb Carr was 15, he was taking part in a search-and-rescue training expedition in Oregon, and an adult on the trip suffered a heart attack. A helicopter from the state’s National Guard arrived to try to airlift the man out, but the operation encountered a problem when trying to lower the rescue litter. “The basket kept swinging back and forth,” he recalls. “[It] couldn’t make it through the trees.”

The traditional method for stabilizing a litter or basket as a helicopter lowers it to the ground is through a tagline, which people down below grab to guide the payload. Taglines, Carr says, “were virtually impossible [to use that day], especially from a dense tree canopy.”

Since the patient required CPR, it wasn’t possible to move him. Ultimately, the airborne evacuation attempt failed. They declared “time of death,” Carr remembers.

That event occurred in 2009, and now Carr is CEO of Vita Inclinata, which has developed a high-tech replacement for taglines. It’s a contraption that includes electric thrusters that can autonomously stabilize a litter that’s dangling from a helicopter.

It may sound like an esoteric problem, but a rapidly-spinning litter beneath a helicopter with a 74-year-old evacuee in it made news in 2019 in a video that will make you gasp. That spinning was attributed to the interaction between the air coming off the helicopter’s rotors (known as wash) and the basket below.

The new system works independently from the aircraft itself. To understand how it functions, picture a litter hanging from a single line beneath a rescue helicopter. The system consists of two units, one at each end of the litter. Each box-like unit has two battery-powered thrusters—one thruster (technically, a fan inside a duct) points in one direction, and another, in the other direction. Since there are two boxes, that adds up to a total of four thrusters, positioned near the four corners of the litter, with the two units connected by a data line. Each box has sensors on board—accelerometer, gyroscope, and magnetometer—and computing equipment. The sensors figure out what’s going on with the load, detecting if it is spinning or not, and instructions zip to the ducted fans to stabilize it.

“A hundred times per second, we’re computing what the best action is for these thrusters to take to stop the spin, or swing, or any type of motion,” says Derek Sikora, the CTO at Vita Inclinata. Imagine the litter is spinning rapidly. “When you kick us on, we’re going to stop that in a matter of three seconds or less—in that case you just kick on the opposing fans.”

Sikora says that the system can be operated from either on board the aircraft or from the ground, using a controller on which someone would just “click ‘stabilize.’” The algorithm and thrusters take it from there.

The setup has another trick: power up two fans on the same side, and it can push the litter through the air, one way or the other, so that it can swing towards a cliff or building to pick someone up. They can “fly a load off-axis, outside the circumference of the rotor blades,” Carr says. “That opens the door for really a whole dynamic shift in the use of helicopters when it comes to rescue operations.”

Every aviation system comes with tradeoffs, and in this case, the system weighs 35 pounds, slightly reducing the load a helicopter basket could carry. And any technology that needs electricity and other components is going to be more complex than something that doesn’t, and complexity can create problems even as it solves them. In this case, their “competition is a rope,” Carr says. Ropes don’t need to be recharged, nor do they need software, but then again, algorithms and thrusters can perform tricks that a rope, or tagline, cannot.

The company is a contender to supply its stabilization system to the Army. The most recent National Defense Authorization Bill includes a $5.5 million appropriation for load stability systems that the military could spend on this gadget if they choose to.