Check out the helicopter vying to be the next Black Hawk

The Defiant, showcased in a new video from Sikorsky, is pitted against one from Bell in the Army's Future Long-Range Assault Aircraft competition. 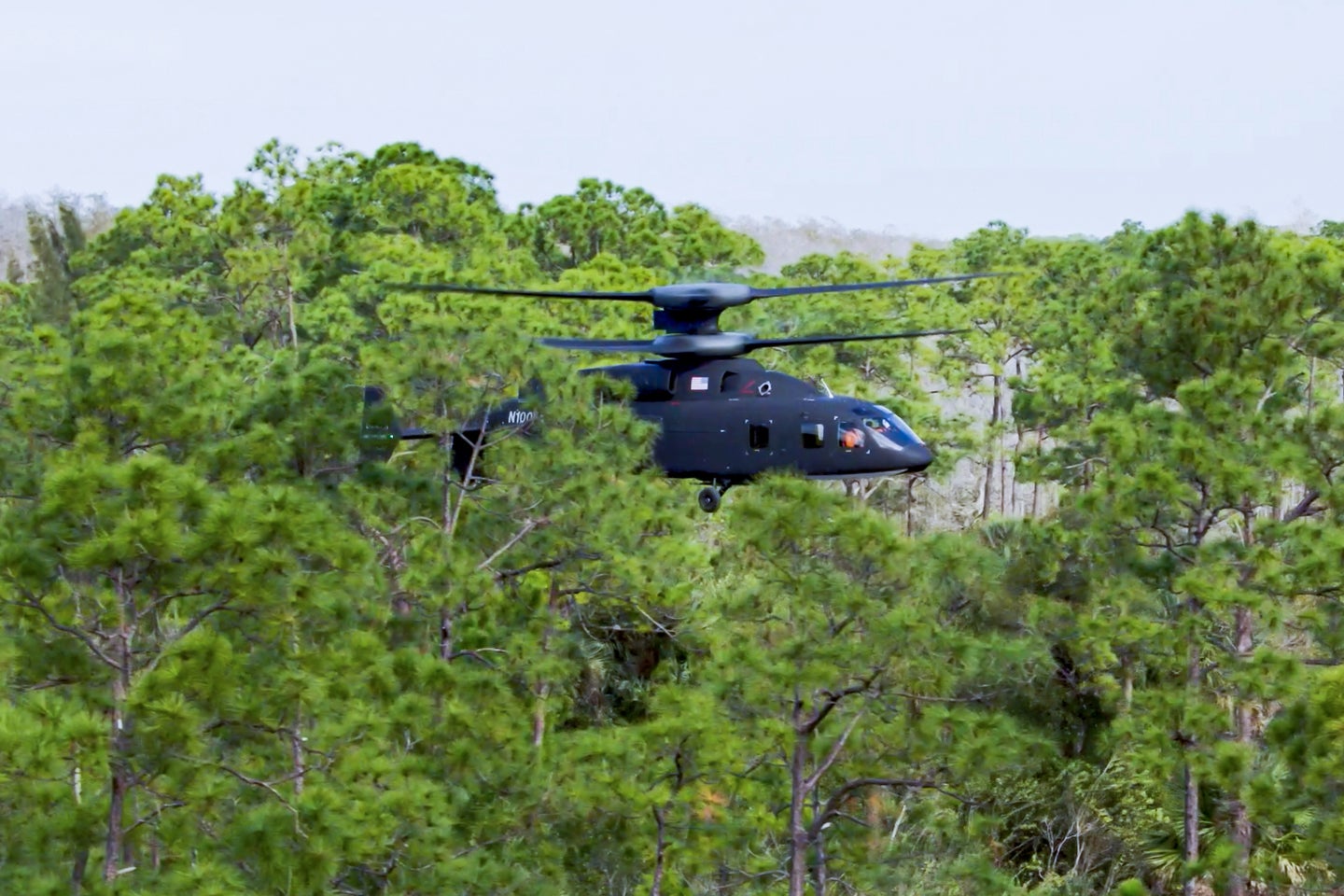 The SB>1 Defiant is the name of the demonstrator helicopter from Sikorsky and Boeing. Sikorsky
SHARE

Two very different designs for futuristic flying machines are dueling against one another to be the Army’s next Black Hawk-type helicopter. Both of them challenge the traditional idea of what a helicopter even looks like. In one corner of the ring is a helicopter with two top rotors that spin in opposite directions, and in the other corner is an aircraft called a tiltrotor. The companies that make them are Sikorsky and Boeing (who have teamed up), and Bell, respectively, and they submitted their proposals last year. The program they’re competing in is called FLRAA, which stands for Future Long-Range Assault Aircraft.

Sikorsky released a new video today of their coaxial candidate, called the SB>1 Defiant, demonstrating some of what it can do, such as banking at 60 degrees, hitting a speed of about 272 miles per hour, and descending into a tight space surrounded by trees.

Because the Defiant looks so different from a regular helicopter, it’s worth unpacking how it works. Its two rigid top rotors are stacked atop one another, and they counterrotate. That’s rare: Most helicopters use a tail rotor as an anti-torque system to counteract the forces created by the single top rotor as it spins—picture a helicopter with one top rotor and no tail rotor, and you could imagine that it would spin around in circles. In the case of the Defiant, those two counterrotating top rotors create lift, while also negating the need for a traditional tail rotor. It also lets the company avoid an issue that can happen if a helicopter flies too quickly called retreating blade stall, which can limit how fast the aircraft safely travels.

In the rear, the Defiant has a large propeller in lieu of that traditional tail rotor. The pilots can use that propeller to help them accelerate or decelerate, and Sikorsky says that that feature also allows them to keep the aircraft level while slowing down, which has benefits when it comes to pilot visibility. “We fully demonstrated Defiant’s ability to execute the FLRAA mission profile by flying 236 knots in level flight, then reducing thrust on the propulsor to rapidly decelerate as we approached the confined, and unimproved, landing zone,” Bill Fell, the Sikorsky chief test pilot for Defiant, said in a statement. “This type of level body deceleration allowed us to maintain situational awareness and view the landing zone throughout the approach and landing without the typical nose-up helicopter deceleration.”

Defiant’s competition is the V-280 Valor, Bell’s submission for the FLRAA program. It’s a speedy craft that employs tilting rotors at the end of its wings. Because the pilot can adjust the orientation of the rotors, the craft can lift off or land like a helicopter, and it can cruise like a plane when it’s flying forward. (Watch it maneuver and fly here.) Bell says that it’s flown as fast as 350 miles per hour, while Sikorsky says their craft has zoomed quicker than 282 mph.

The Army should make a decision about which aircraft it wants to move forward with in the FLRAA program at some point this year. “FLRAA is currently in the competitive phase of the acquisition process,” the Army’s Program Executive Office for Aviation said in a statement to PopSci. “The source selection process is ongoing and includes many steps before the Army makes a final decision.”

In the meantime, watch the latest video about the Defiant, below: