This machine will challenge the way you think about chopper design. 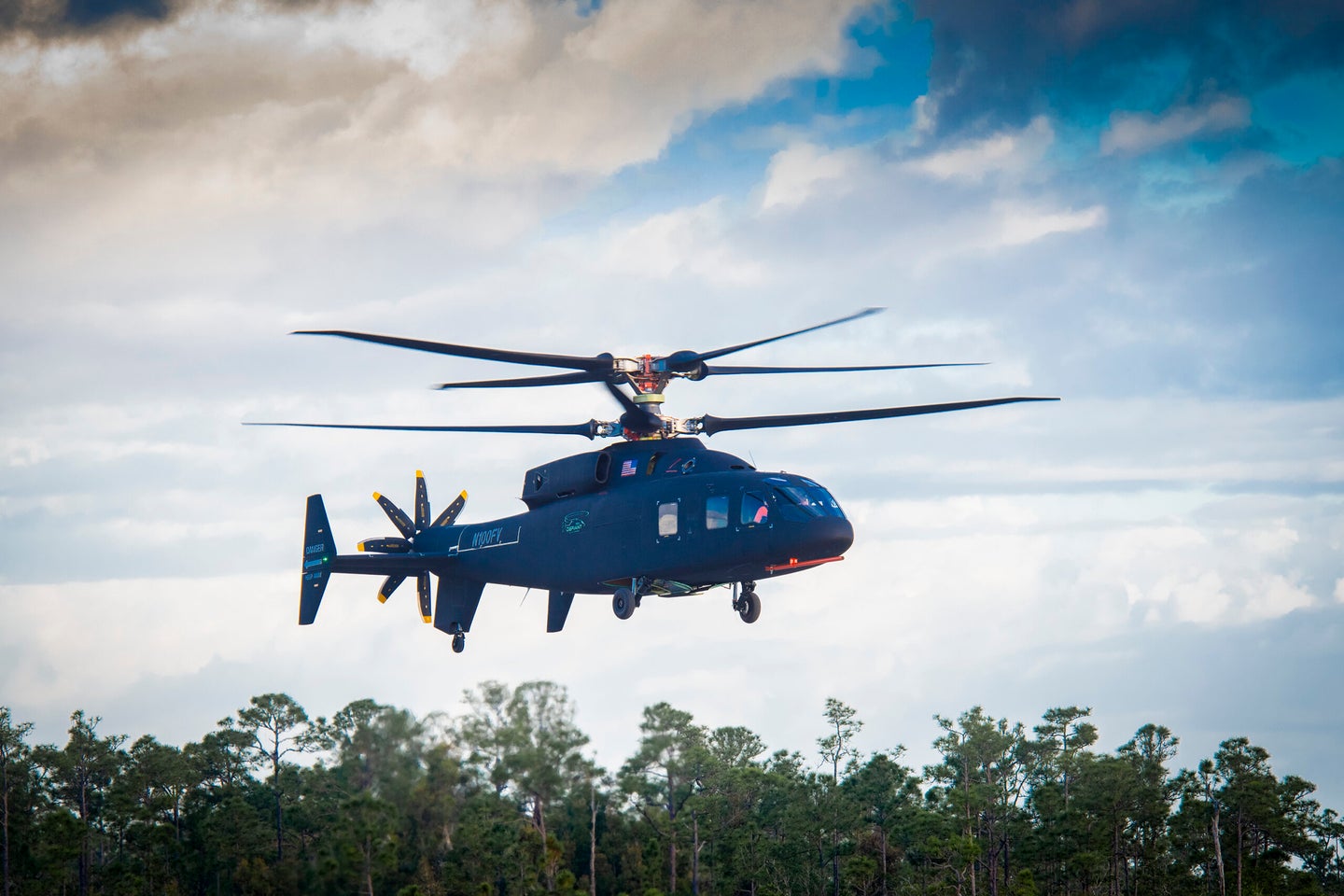 Picture a helicopter, and you’ll imagine a craft with two rotors: a big horizontal one that provides lift and thrust, and a smaller vertical rotor at the tail. It needs that back propeller, of course, to keep the entire vehicle from spinning around in circles in reaction to the large rotor up top.

But last week, a very different helicopter lifted off the ground for the first time in Florida. Called the Defiant, the prototype has two big rotors positioned one directly above the other. They rotate in different directions, so the chopper doesn’t need that back vertical propeller to keep it from twirling. Instead, the rear propeller pushes the helicopter forward and boosts its speed. While the Defiant, which is made by both Boeing and Sikorsky, is just a demonstration-level prototype, a helicopter like this could someday carry out the kinds of missions for the Army that Black Hawks do today.

With a helicopter like the Defiant, “there’s no need for a seperate anti-torque system,” says William Crossley, a professor at Purdue University’s School of Aeronautics and Astronautics, referring to the typical rear rotor. Instead, the pusher propeller in the back gives a speed boost instead of concerning itself with keeping the bird straight. “Then you can go much, much faster than a traditional helicopter.”

And of course, a helicopter that can go faster than a Black Hawk would be key for the military. “That faster travel speed, to get people in, or get people out quickly—it would be a huge advantage for the Army to have that kind of capability,” Crossley says.

Most helicopters hit top speeds of just over 150 mph, he notes, although the helicopter speed record, from a machine called the Westland Lynx, stands at about 249 mph. The Defiant should be able to cruise at speeds above 265 mph—that’s almost twice as fast as a standard helicopter. It also promises to be more maneuverable, which could be good for urban combat situations.

Besides speed, the coaxial design also has another advantage. The top rotor pulls down air from above, and then pushes it down—feeding faster air into the lower rotor. “The lower rotor accelerates it even more, and that acceleration is what gives you the lift,” Crossley says. That makes a coaxial design more efficient.

Being flexible is bad

The Defiant isn’t the first coaxial helicopter: the Russian Kamov Ka-80 sports two rotors above each other, and Chinook helicopters also use two large rotors that spin in different directions. While that’s not a coaxial setup, Chinooks don’t need a vertical rotor to keep the fuselage from spinning in circles. Meanwhile, Bell is also working on a related craft in the same general category called the V-280 Valor.

Of course, making a flying machine like the Defiant has its own challenges. For one, the double rotors need to be totally rigid, so they don’t bounce and hit each other—an event that would be catastrophic for the craft. These rotors are made from composite material, and have no flex to them, according to Boeing and Sikorsky.

And not surprisingly, the gear system that allows both rotors to spin in opposite directions must be highly complex. There are other considerations, too: stacked rotors can create more drag as the helicopter travels through the air, so future versions of the Defiant will have components around the hubs of the rotors and between them designed to limit that drag.

Boeing and Sikorsky are planning more flights of the Defiant in the near future.