Elvis (the helicopter) is cheating death by becoming a drone

The S-64 Air Crane is a former firefighting helicopter that’s being converted for autonomous operations. 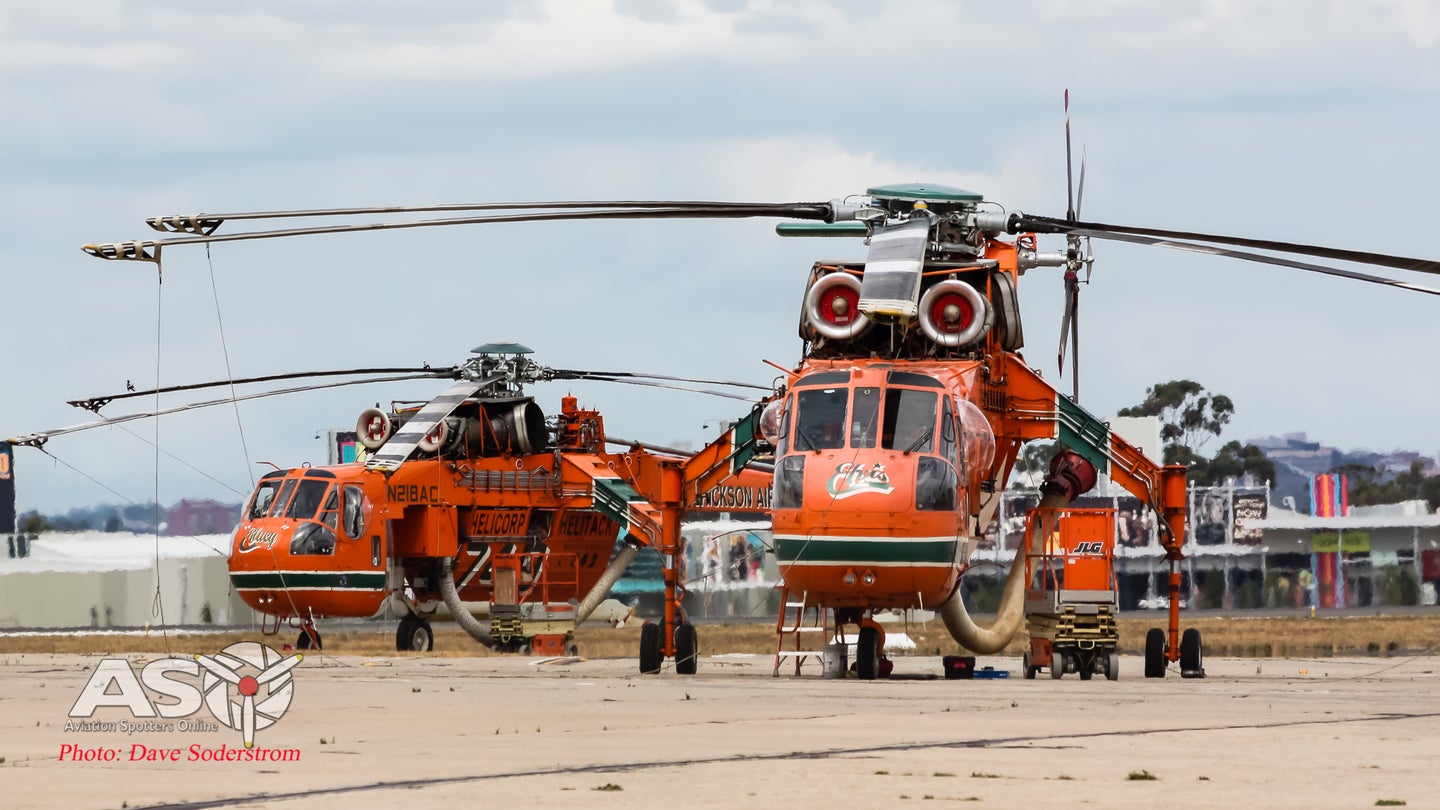 Elvis is on the right. Dave Soderstrom / Erickson
SHARE

The makers of an old workhorse helicopter named Elvis are converting their venerable flying machine into an autonomous robot. Aircraft maker Erickson and helicopter giant Sikorsky are working together to retrofit the cargo helicopter into a flying robot, one that could both fight forest fires and resupply military missions, all without risking the life of an onboard pilot.

Elvis is an S-64 Air Crane, the commercial adaption of a military cargo helicopter that first flew in the 1960s. In commercial service, these helicopters found a life hauling logs, in an approach to forestry billed as minimally invasive logging.

Beyond hauling trees away, Air Cranes have been outfitted with forest fire-fighting equipment, able to quickly fill up a 2,650 gallon belly tank of water in just 45 seconds, and then disgorge those contents on a forest fire.

Why do this? Converting workhorse helicopters to autonomous, robot-piloted machines can save lives, while still fulfilling that their firefighting or sky-trucking promise.

“We’re excited that Elvis lives, but Elvis is getting a bit of a cyborg eyeball,” Jeff Baxter, senior director of research and product development at Erickson, told helicopter industry magazine Vertical in an interview published earlier this month.

The impetus behind upgrading Elvis was finding a way to use the helicopter in riskier missions, including forest fire fighting, and expanding what the airframe could do. That led Erickson to Sikorsky, which was already doing this work for US Army UH-60 Black Hawk helicopters.

Air Cranes have a military past and possibly a military future. The US Army flew Air Cranes in the Vietnam War, carrying everything from ready-made field hospitals to transport pods carrying 45 soldiers. The Air Crane even saw use as a bomber, with a massive “daisy-cutter” bomb slung in the cargo spot. When dropped it would clear out enough forest to make a landing zone for other helicopters to use. (The daisycutter was also devastating to any humans or vehicles close enough to the blast.)

In the early 2010s, two autonomous K-Max helicopters resupplied US Marines in Afghanistan, which is the kind of work an autonomous Air Crane is likely to do for the military.

[Related: How aerial firefighters battle blazes from the skies]

Elvis the Air Crane has a particular history in forest firefighting, with repeat deployments from a home base in the United States to Australia for more than half of the fire seasons since 1997. It is good, important work, but it is work constrained by the limits of human pilots, and the amount of risk they are willing to take. Night flying, mountain flying, and adverse weather conditions all exacerbate the danger to a human pilot, and in turn the danger to the whole operation.

Putting a robot in charge of flying can mitigate several of those risks, all in one tidy autonomous package.

Erickson first announced the plan to upgrade Elvis into a drone in January 2020, saying at the time that the plan was for a “pilot optional nighttime firefighting solution.” Pilot-optional is one common way to convert an existing crewed aircraft into a drone aircraft, by adding in systems that can take over flight operations without the human, while leaving the possibility for a human crew to sometimes hop into the cockpit and fly conventionally.

Converting Elvis to a robot means adding in more sensors and cameras and controls that will allow it to navigate autonomously. Sensors like LiDAR, which use lasers to determine how far objects are from the vehicle, could give it some on-board situational awareness.

Powering all of this autonomy will be a system from Sikorsky called “MATRIX,” which the company describes as “like a virtual second pilot that will help operators fly safely and confidently in dangerous and complex missions.” As billed, MATRIX is both software and hardware designed to serve autonomy, creating safer flight patterns for use in both commercial and military settings.

This technology is already at work in efforts to convert old military UH-60 Black Hawk helicopters to fully autonomous machines. By relying on sensors other than traditional avionics and human vision, it is possible these machines can fly through difficult conditions, like smoke or sandstorms, and navigate safely, autonomously to the other side.

When paired with human pilots, these upgrades are designed to shift the cognitive burden, or the amount of mental obligation a human has when operating a machine. Flying is full of discrete tasks, from staying level, to plotting a route, to avoiding obstacles, to reading displays and communicating with other people. The more of that burden a helicopter can take on, the easier it is for a human to focus on what remains.

In military use, an autonomous machine like Elvis could become a reliable trucking tool for difficult-to-resupply bases. While it is unlikely that the autonomous Air Cranes have any more work as bombers in their future, the simple and mundane work of getting food and ammunition to remote outposts will likely forever be a part of military missions. Trusting that work to a robot means saving a human from drudgery on the best of days, and from tragedy on the worst ones.