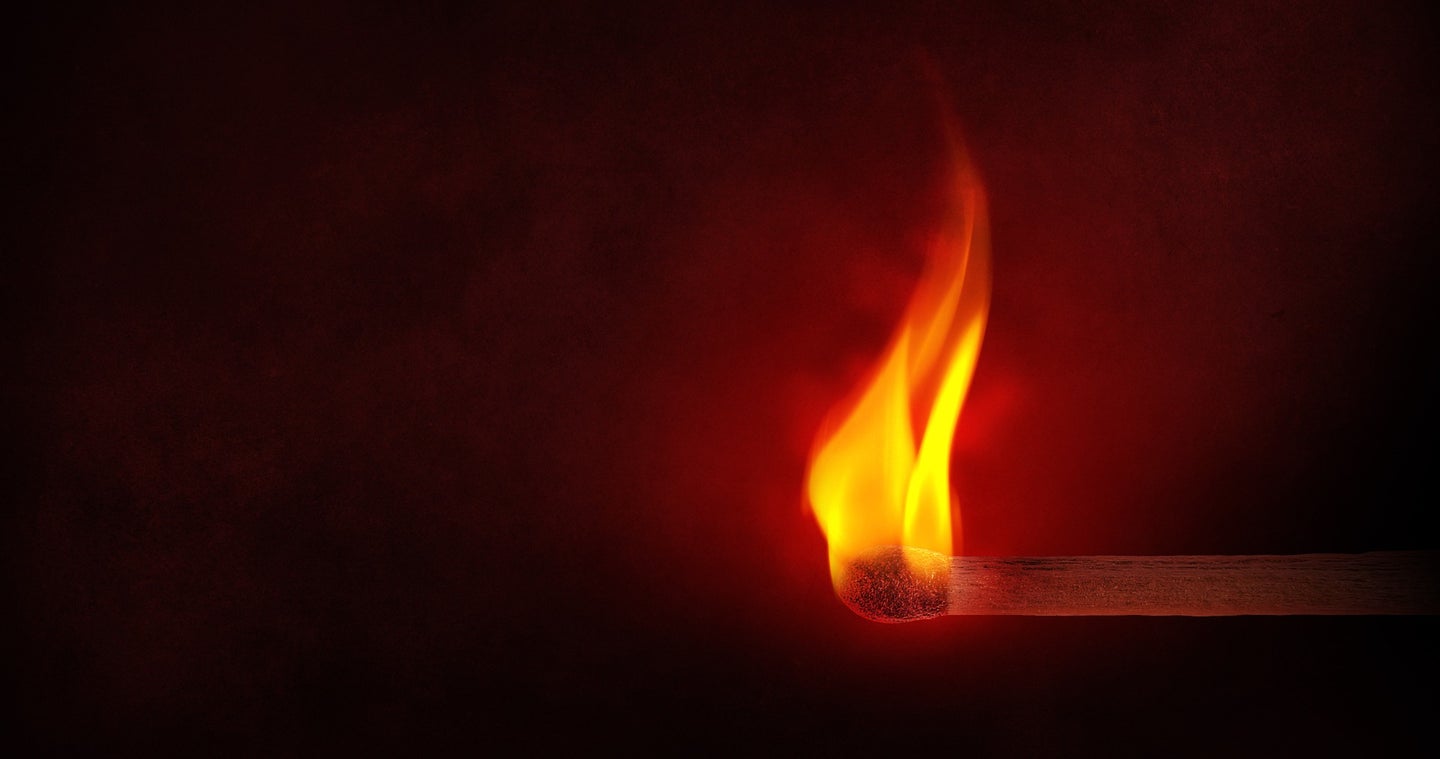 The following is an excerpt from CAESAR’S LAST BREATH: Decoding the Secrets of the Air Around Us by Sam Kean.

When Charles Dickens published this scene in December 1852—an excerpt from his novel Bleak House—most readers swallowed it completely. After all, Dickens wrote realistic stories, and he took great pains to depict scientific matters like smallpox infections and brain damage. So even though Krook was fictional, the public trusted that Dickens had portrayed spontaneous combustion accurately.

But a few members of the public couldn’t read about Krook’s death without themselves burning up, in rage. Scientists at the time were laboring to debunk old nonsense like clairvoyance, mesmerism, and the idea that people sometimes burst into flames for no reason. Within two weeks, skeptics began challenging Dickens in print, igniting one of the strangest controversies in literary history—a controversy about the role of oxygen in human metabolism.

Lewes had studied physiology as a young man, so he understood the body. He also had a foot in the literary world as a critic and playwright and as George Eliot’s longtime lover. He counted Dickens as a friend. Not that you’d know that from Lewes’s response to Bleak House. He acknowledged that artists have a license to bend the truth sometimes, but he protested that novelists can’t just ignore the laws of physics. “The[se] circumstances are beyond the limits of acceptable fiction,” he wrote. He furthermore accused Dickens of cheap sensationalism and “of giving currency to a vulgar error.”

Dickens swung back. He was publishing Bleak House in monthly installments, so he had time to slip a rebuttal into the January episode. The action picks up with the inquest into Krook’s death, and Dickens mocks critics of spontaneous combustion as eggheads too blind to see plain evidence: “Some of these authorities (of course the wisest) hold . . . that the deceased had no business to die in the alleged manner,” Dickens wrote. But common sense eventually triumphs, and the coroner in the story declares, “These are mysteries we can’t account for!”

In private letters to Lewes, Dickens continued his campaign, mentioning several cases of spontaneous combustion throughout history. He leaned especially hard on the case of an Italian countess who combusted in 1731. She reportedly bathed in brandy to soften her skin, and the morning after one such bath her maid walked into her room to find the bed unslept on. As with Mr. Krook, soot hung suspended in the air, along with a yellow haze of oil. The maid found the countess’s legs — just her legs — standing several feet from the bed. A pile of ashes sat between them, along with her charred skull. Nothing else seemed amiss, except for two melted candles nearby. A priest had recorded this tale, so Dickens considered it trustworthy.

Nor was he the only author to believe in spontaneous combustion. Mark Twain, Herman Melville, and Washington Irving all had characters erupt as well. As with the “nonfiction” accounts, most of these scenes involved old, sedentary alcoholics. Their torsos always burned to ash but their extremities often survived intact. Most eerie of all, beyond the occasional scorch mark on the floor, the flames never consumed anything but the victim’s body.

Believe it or not, Dickens and these other authors had some science backing them up here. Dickens wrote Bleak House within a decade of the discovery of nitroglycerin—an explosive oil that can indeed detonate spontaneously. More significantly, spontaneous combustion seemed tied up with one of the most important discoveries in medical history, which linked the seemingly separate phenomena of burning, breathing, and the circulation of blood.

In 1628 William Harvey provided the first real evidence that blood flows around the body in a circuit, with the heart acting as a pump. (People before this assumed that the liver converted food into blood and that our organs “drank” blood the way plants do water.) At the same time, Harvey made some dubious guesses about the circulation of other fluids, like air. He knew that both blood and air passed through the lungs, but he insisted that the two fluids didn’t mingle there. Instead, he argued that the lungs merely cooled the blood by churning it, in much the same way you’d stir soup to cool it. In other words, the lungs had a mechanical role but didn’t alter blood chemically — only the heart could do that.

In the 1660s, Robert Hooke and Robert Lower—members of a new scientific boys’ club called the Royal Society—finally disproved Harvey’s theory about the lungs merely cooling the blood. They did so through a series of bloodcurdling experiments that involved vivisecting a dog. I’ll spare you the worst details, but they snipped small holes in the dog’s lungs to allow air to stream through, and slipped the nozzle of a bellows into its windpipe. Repeated pumping of the bellows kept the lungs inflated, like a windsock in a gale. As a result, the lungs remained stationary for several minutes at a time, neither expanding nor contracting.

The dog’s heart and other organs worked just fine as long as air kept streaming through the lungs, despite their immobility. Contra Harvey, then, the mere motion of the lungs meant nothing. The duo also saw the dogs’ blood change color as it moved through their lungs, switching from a somber Picasso blue to a bold Matisse red. All this lent strong support to their theory that the lungs did indeed trigger a chemical change in the blood, either infusing it with some substance or removing waste fumes.

Both, it turns out. As we saw earlier, chemists in the late 1700s determined that the lungs take in oxygen and expel carbon dioxide. (As for the color, when oxygen enters red blood cells it latches onto hemoglobin molecules there. Hemoglobin contains iron atoms, which bond readily to oxygen, and the addition of oxygen changes the shape of hemoglobin. This in turn changes its color from bluish to bright red.) In addition to connecting oxygen with breathing, these chemists had already linked oxygen with combustion, burning. So when they realized that blood delivers oxygen to our cells, they declared, QED, that breathing must involve a sort of slow combustion inside us — a constant burning, with our own bodies acting as the fuel.

And if slow fires burned inside us all the time, why couldn’t they flare up on occasion, especially in alcoholics, whose very organs were dripping with gin or rum? To this way of thinking, spontaneous combustion didn’t seem ridiculous at all. (Plus, not to put too fine a point on it, we all pass flammable gases several times each day.) As for what sets the fires off, perhaps fevers did, or raging hot tempers. In defending spontaneous combustion, Dickens was throwing fuel onto a smoldering scientific debate.

Lewes, however, was having none of this. He read over Dickens’s historical accounts and dismissed them as “humorous but not convincing,” noting that several were over a century old. It didn’t help that Dickens enlisted the endorsement of a celebrity doctor who promoted phrenology as well. Lewes also pointed out that none of the “factual” accounts were written by eyewitnesses. The authors had always heard the story secondhand, from a cousin’s friend or landlord’s brother-in-law.

Most damning of all, Lewes had a better grasp on modern physiology. He pointed out recent work showing that the liver metabolizes alcohol, breaking it down for elimination, so despite what their breath might smell like, the organs of alcoholics aren’t soaking in booze. Even if they were, the body is roughly three-quarters water, so it wouldn’t catch fire anyway. And doctors knew by then that fevers don’t burn nearly hot enough to ignite anything.

Not surprisingly, Dickens dug in. He’d always had an ambivalent relationship with science. He couldn’t deny the marvels that science had wrought, but he was fundamentally a romantic and thought that science killed imagination. Artistically, too, he considered the scene with Krook so central to his novel (which involves a ruinous court case that “consumes” the lives and fortunes of everyone involved) that he couldn’t stand it being picked apart. And the more defensive Dickens got, the more disgusted Lewes felt. They continued to bicker for ten months, then mutually dropped the matter when the final installment of Bleak House appeared in September 1853.

History of course has judged Lewes the winner here: outside the Franklin, North Carolina tabloids, no human being has ever spontaneously combusted. But back then the idea of spontaneous combustion wasn’t as vulgar and ridiculous as Lewes claimed; one medical text was discussing cases as late as 1928. Plus, Dickens was undeniably right about one thing: that in human affairs, spontaneous combustion can happen. Dickens and Lewes eventually patched things up, but for those ten months in 1853 the fires burned awfully hot in London. They’d be the first to tell you that friendships and reputations can ignite instantly and consume themselves in smoke and ashes.

Excerpted from CAESAR’S LAST BREATH: Decoding the Secrets of the Air Around Us by Sam Kean. July 2017 Little, Brown and Company. Published with permission.