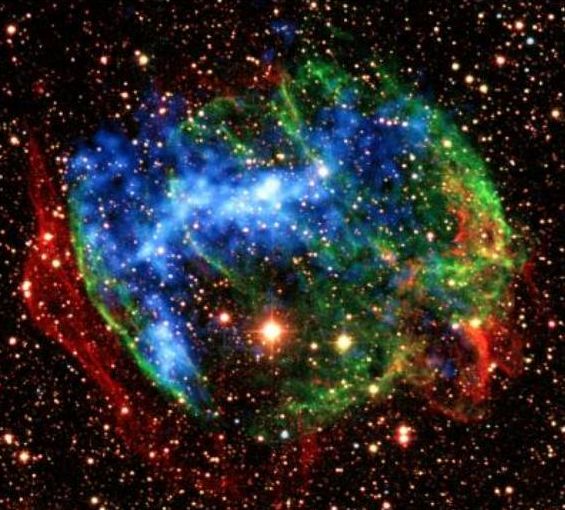 A new type of supernova remnant still holds the embers of the fireball that first blossomed thousands of years ago. The remnant gas retains ions with the imprint of temperatures 10,000 times hotter than the sun’s surface, according to scientists who made the observations with the Japan-U.S. Suzaku space observatory.

A stellar explosion about 4,000 years ago caused a blast wave to travel through dense gas and dust surrounding a dying star. That heated some of the gas to temperatures as high as 100 million degrees F (55 million C). The expanding nebula of gas and dust gradually began to cool, but collisions between particles remain rare because of the extremely thin density — about a single atom per volume of space the size of a sugar cube. That has allowed the hottest atoms or particles to remain in their respective states.

The astronomer team spotted the unusually hot specimens some 5,000 light-years away in the constellation Gemini, in a remnant known as the Jellyfish Nebula. That prompted some rather colorful descriptions of how Suzaku’s X-ray instruments teased apart X-rays by energy, not unlike how a glass prism can separate light into all the colors of the rainbow.

“Suzaku sees the Jellyfish’s hot heart,” said Midori Ozawa, a member of the team at Kyoto University in Japan. At least it has a heart, unlike that pitiless T Pyxidis supernova that could wipe out life on Earth millions of years from now.