The rare event happens once every one or two years. 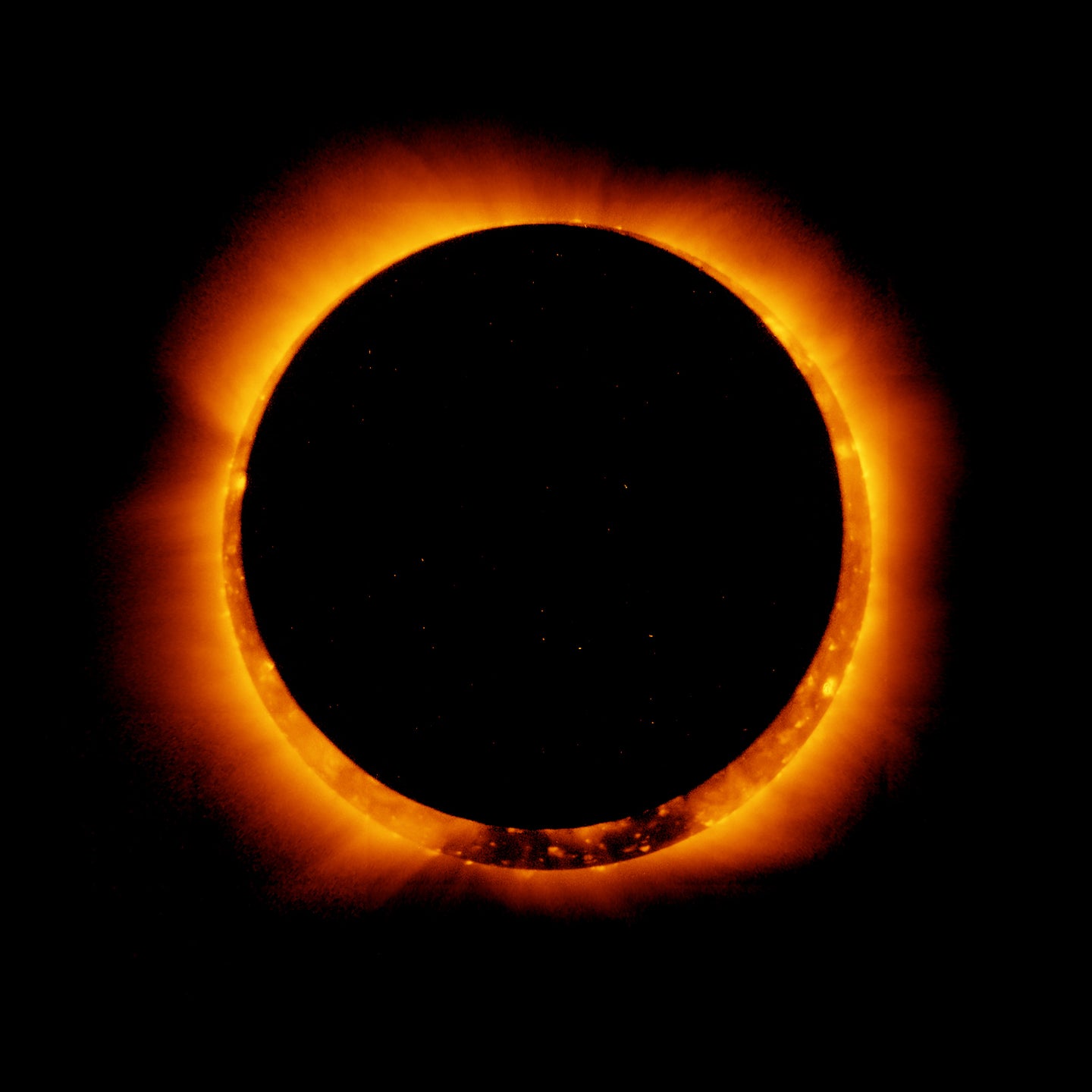 On January 4, 2011, the Hinode satellite captured these breathtaking images of an annular solar eclipse. NASA/Hinode/XRT
SHARE

This Sunday, June 21st, if you’re in central Africa, Asia, or the Middle East, don’t forget to look up at the sky (with the proper protection)—you’re in for a fiery celestial show.

At 3:45 UTC, a “ring of fire” will rise in the sky, caused by an annular solar eclipse—a spectacle that only happens once every one or two years when the moon is farthest away in its orbit. The more familiar full solar eclipse happens when the moon is closer to Earth, appearing larger and smothering the sun’s brightness completely. But the smaller, more distant moon in an annular solar eclipse only partially covers the sun, creating a flaming, silhouetted ring.

At the peak of this eclipse, 99.4% of the sun will be hidden by the moon, and the resultant ring of fire will be visible in northern India, particularly in Rajasthan, Haryana and Uttarakhand. Other regions, from southeastern Europe to northern Australia, will witness less coverage of the sun by the moon. The Republic of the Congo and the Democratic Republic of the Congo will be able to see this spectacle at sunrise, while South Sudan, Ethiopia, Eritrea, Yemen, Oman, Pakistan, India, Tibet, China, and Taiwan can enjoy this one-minute long eclipse during the day.

Right before the eclipse reaches its peak, the sky will darken slightly, and animals may even behave in bizarre ways. Spiders have been known to break down their webs during eclipses, and bats have flown across the sky during the day. In some places, it may even be possible to view the sun’s white hot atmosphere, called the corona, which is usually invisible to the eye during the day. If you’re lucky, you might catch a glimpse of Baily’s beads, a lunar phenomenon in which the rugged landscape of the moon allows beads of sunlight to shine through only in some areas, creating a shining, dappled silver lining effect.

If you’d like to check out the ring of fire for yourself, it’s crucial to always wear proper eye protection, even if viewing an eclipse for just a few seconds. An eclipsed sun can cause permanent eye damage and blindness, so be sure to wear eclipse glasses at all times. These are sold commercially, but make sure you purchase them from a reputable vendor. Do not use sunglasses, polaroid filters, X-ray film, or color film—these won’t protect your eyes.

What makes this annual event even more rare is that it’s happening during the week of summer solstice—this won’t happen again until 2039. After this weekend, the next annular solar eclipse will fall upon us on June 10, 2021, but will be visibly mostly from the Arctic, and northern Ontario and northern Quebec.

The next total solar eclipse will be on December 14, 2020, falling upon Chile and Argentina. What’s called the “path of totality” will bathe the Chilean Lake District and Patagonia with daytime darkness for 2 minutes and 9 seconds.