NASA is finally going back to Venus. Here’s what its twin missions hope to uncover.

VERITAS and DAVINCI+ will arrive at the long-overlooked planet toward the end of the decade. 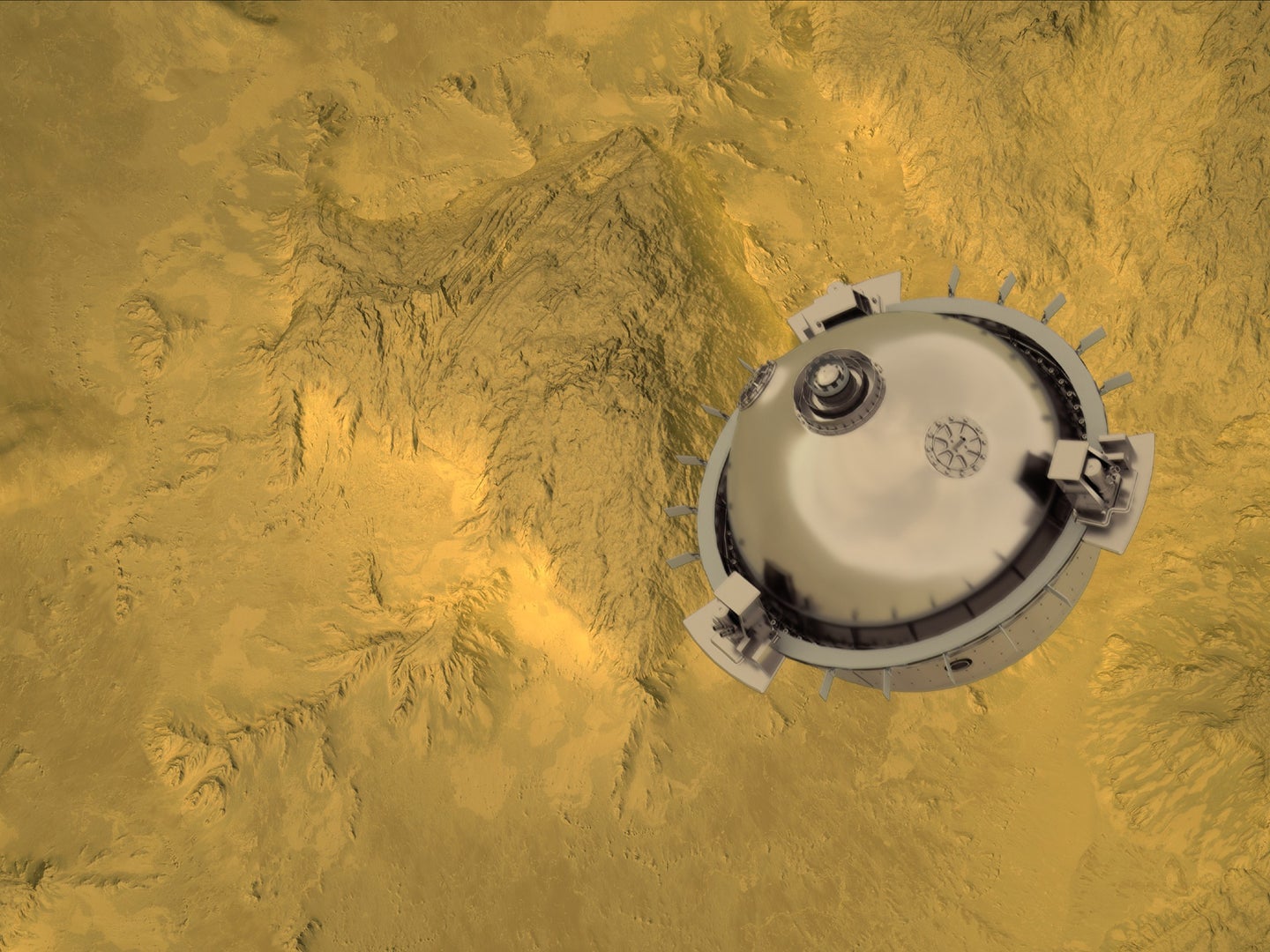 DAVINCI+ will release a metal probe to fall through Venus’s atmosphere and measure its makeup. NASA GSFC visualization by CI Labs Michael Lentz and others
SHARE

More than a decade ago, she participated on the science team developing a probe that would have sampled the toxic atmosphere and scratched at rocks on the Venusian surface. NASA selected the mission as one of three finalists in 2009, but opted to go pick up asteroid dust instead.

In 2015, she tried again. Dyar joined a group lead by Suzanne Smrekar of the Jet Propulsion Laboratory (JPL) to design an orbiter spacecraft that could map Venus’s landforms and rock types from above. It became one of five finalists, along with another mission to plunge through Venus’s clouds. In 2017, NASA greenlighted two competitors, both to asteroids. “They funded pretty much everything except the two Venus missions,” Dyar says. “That experience hung with all of us.”

But there was no time to wallow, as the deadline for more ambitious mission concepts was just four months away. The core band of tenacious scientists raced to fuse their orbiter idea with the atmospheric probe, with Dyar and Smrekar polishing the proposal until 2 a.m. on the morning it was due, fueled by their desire to visit Venus (and some tequila, according to Dyar). Their plan was one of just three to receive top marks. NASA moved ahead with the other two. “That was extremely frustrating,” she says.

Nevertheless, the crew picked themselves back up and started preparing for the next call for proposals. This time, they could work leisurely and had no need for tequila.

Their years of effort drafting and redrafting plans for getting to Venus have finally paid off. On June 2, NASA announced that it will finally return to our other planetary next-door neighbor, after a decades-long absence. The space agency has chosen to fund two missions, the final incarnations of both the orbiter and the atmospheric probe that the agency had passed over so many times before. The decisive win has Dyar and the rest of the Venus scientific community feeling elated.

“Pinch me! I went around just not believing for the first day or two,” she says. “I kept thinking I was going to wake up the next day and find out that it was a dream.”

The finer details may shift as mission designers continue to work with NASA, but here’s the general plan for how Dyar and her many collaborators will attempt to answer fundamental questions about Venus, including how it formed, whether it ever had the conditions for life, and what it looks like today.

The first mission, for which Dyar serves as the No. 2 scientist (Smrekar is No. 1), launches in 2028. The Venus Emissivity, Radio Science, InSAR, Topography, and Spectroscopy (or VERITAS) spacecraft will spend about six months traveling to Venus, and then roughly three years in orbit. From its perch between 110 and 150 miles above the planet (half the altitude of the ISS above the Earth), VERITAS will use two main science instruments to accomplish two main goals.

First, VERITAS will use radar to pierce the planet’s thick cloud cover and scan its surface to produce a sharp map of its geography. NASA took this basic step for Mars with the Mars Reconnaissance Orbiter in 2006, but Venus exploration has lagged behind.

The yellow planet’s best map to date comes from the Magellan orbiter, which operated from 1990 to 1994. The radar image it compiled of Venus was fuzzy: Each pixel of the map represented around 12.5 miles of Venus’s surface. VERITAS’s modern radar eye will see 100 times more clearly, with each pixel covering just dozens to hundreds of feet. It will also map topography, registering heights to the nearest 15 feet or so.

These new maps will be essential for geologists hoping to understand how Venus’s land has shifted over time, and for mission planners designing future landers. “It’s foundational data,” Dyar says.

Second, the spacecraft will map the planet’s geology—specifically the distribution of different rock types, especially the basalt and granite thought to make up the majority of Venus’s ground. Researchers who can’t take rock samples directly usually work out a material’s makeup through spectroscopy, which involves analyzing the specific colors of light a substance reflects or emits. But Venus’s rocks are hidden behind a nearly impenetrable veil of carbon dioxide clouds, possible remnants of ancient oceans long since boiled away.

But the VERITAS researchers have shown time and again they aren’t easily discouraged. To tackle this challenge, they plan to exploit a few cracks in Venus’s carbon dioxide shell. The molecule fails to block light rays from a handful of wavelengths clustered near 1,000 nanometers—which happens to be helpful in identifying certain metals, including iron.

No one knows exactly what familiar materials look like in the inferno that is Venus (the lower atmosphere is hot enough to melt lead and dozens of times denser than air on Earth), but Dyar has a few years to find out. Her lab is currently collaborating with the German space agency to bake various samples and use machine learning to try to detect their composition spectroscopically.

As VERITAS orbits Venus, it will be joined mid-mission by the Deep Atmosphere Venus Investigation of Noble gases, Chemistry, and Imaging Plus (DAVINCI+). Launching in 2029, DAVINCI+ will, after six months of transit, spend 16 months doing a series of Venus flybys, which it will use to adjust its position as necessary to precisely deliver its payload.

On the third flyby, it will drop a probe directly over Venus’s Alpha Regio region, one example of mysterious landforms known as tesserae. Most of the planet is basaltic flatlands, but the tesserae are lighter features that poke up about a mile above the plains. Some researchers believe these highlands to be relics of Venus’s early crust—perhaps the remains of ancient continents.

Shortly after separation will begin a brief period of time that deputy principal investigator Stephanie Getty is calling “the 59 minutes of excitement.” After 22 months of getting into position, the probe will have just shy of one hour to learn as much as it can about the Venusian atmosphere.

The action will start about 42 miles above the surface, as a parachute slows the fall of a three-foot wide metal sphere. A peculiar pattern of tabs will keep it turning at a gentle and stable rate. Roughly every 600 feet, the probe will take a whiff of the Venusian air and record the quantities of various gases present at that altitude, including oxygen, sulfur, xenon, and helium.

[Related: The ‘double-disk’ shape of the Milky Way could be common across galaxies]

From these datasets, planetary scientists hope to fill in gaping holes in their knowledge of Venus’s history. Planets belch out inert gases like helium at different rates, and by measuring these “noble” gases, for instance, researchers will be able to reconstruct how Venus formed and evolved.

DAVINCI+ will also sniff out different varieties of hydrogen left behind as the planet’s oceans and lakes evaporated, broke apart into hydrogen and oxygen, and were partially lost to space. These molecules will tell researchers whether—and for how long—Venus featured the warm, wet conditions necessary for life. Such questions are becoming increasingly urgent as astronomers discover thousands of exoplanets, some of which may currently resemble ancient Venus. “The mechanisms that [may have] made it habitable could be operating now” on other planets, so we could “observe them in action,” says Giada Arney, another deputy principal investigator for DAVINCI+.

After roughly 30 minutes of airtime, the probe will have fallen to an altitude of about 25 miles. At this point, the sphere will pop out below the clouds, giving its downward pointing camera a clear view of Alpha Regio below. At lower altitudes the air grows increasingly thick, acting more and more like a liquid. Buoyed by the sloshing air around it, the sphere will cut loose its parachute and complete the second half of its descent unassisted. The machine will continue to snap pictures and sample the atmosphere until about half a mile above the surface, using its final moments of airtime to beam its data back to the mothership above. When the transmission finishes, the mission officially comes to an end.

But DAVINCI+ may yet persist. Arney says the titanium sphere is expected to impact the surface of Venus at about 30 miles per hour, which may or may not be a fatal landing. On the off-chance its electronics continue to function, the probe should be able to keep taking measurements and images (although its camera would likely be resting against the ground) for another 18 minutes before succumbing to Venus’s harsh environment.

The decade of Venus

Dyar hopes that, after a decade of disappointment, VERITAS and DAVINCI+ will usher in a decade of action for the Venus community. With modern maps and datasets, the knowledge gap between what researchers understand of Venus and what they understand of Mars will begin to narrow. To really catch up, however, they’ll need to touch down on the surface. And with today’s technology, scientists like Dyar can dream bigger than they did back in 2009. She sees two main ways to explore the surface.

The first is a full-scale lander. This machine would likely take the form of a six-foot wide sphere, bristling with geochemistry instruments that could survive for one to five days.

Or NASA could go small. The agency has invested considerable resources developing light, rugged, comparatively simple machines known as Long-Lived In-Situ Solar System Explorers or LLISSEs, which could theoretically operate for up to two months on Venus. Their shoe-box size would let a probe deploy a small fleet of LLISSEs to the surface, where they could take pictures, sense Venus quakes, or carry out any number of missions.

The next call for mission profiles goes out in 2024, and Dyar is looking forward to the competition.

“I’m hoping we get both kinds of proposals submitted,” she says. “And we’ll let the best proposal win.”