The massive beasts are dense on the outside and gooey on the inside. 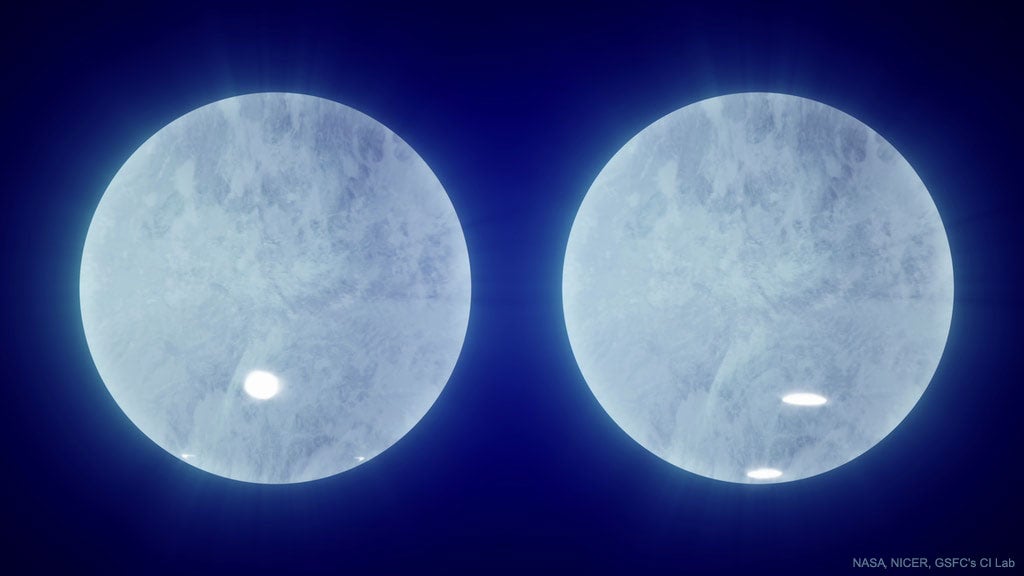 New instruments can generate maps of neutron stars in unprecedented detail, but physicists are still trying to figure out what lies beneath the surface. NASA, NICER, GSFC's CI Lab
SHARE

The Earth is a balmy oasis in cosmos of raging extremes, and few bodies are more extreme than neutron stars. These objects form when stars of a certain mass die, and their cores collapse and cram a couple of suns worth of mass into an orb the size of a city. Inside, atoms as we know them—dense beads of protons and neutrons surrounded by airy clouds of electrons—cease to exist. Gravity crushes the atomic centers together and neutrons stand shoulder to shoulder. Add much more mass and the star would collapse into a black hole, its atoms vanishing from view.

“Neutron stars,” writes Jocelyn Read, an astrophysicist at California State University, Fullerton are “the place where matter makes its last stand against the overwhelming force of gravity.”

While astronomers can detect neutron stars in a variety of ways, exactly what goes on inside them remains poorly understood. But after decades of research, recent observations and theoretical advances are coming together to suggest that the objects might be in need of rebranding. Rather than stiff balls of neutrons, research published Monday in Nature Physics suggests some of the heaviest stars might resemble tootsie pops: crunchy neutron shells surrounding a gooey center of an exotic substance known as “quark matter.” Researchers have created quark matter in violent particle collisions but have long debated whether neutron stars have what it takes to thoroughly crush subatomic particles in the wild. The team’s conclusion, if correct, would represent new understanding of how protons and neutrons behave under duress and could update the story of how various metals found their way to Earth.

“We have now seen hints of the possible existence of quark matter inside the neutron star,” says Aleksi Kurkela, a co-author and particle physicist at the European Organization for Nuclear Research (CERN). “It’s very exciting.”

As the wildest form a star can take without giving up entirely, neutron stars stretch our best theories of matter to the breaking point. In low-energy collider experiments (and accordingly at low densities of matter), protons and neutrons bounce cleanly off each other like billiard balls. Under these conditions—at densities of up to hundreds of million tons per cubic centimeter—neutrons snap together as rigid building blocks.

Oddly enough, physicists know what happens at unspeakably high densities too. When especially high-energy collider experiments pack hundreds of times more particles into the same space than their low-energy counterparts, protons and neutrons fall apart. Their innards, particles known as quarks and gluons, wholly spill out as a soupy substance dubbed a quark-gluon plasma—one form of so-called “quark matter.”

But what goes on at densities between remains unknown. Experiments are challenging and mathematical tools fail when neutrons get squishy without melting away entirely. And neutron stars fall smack in the middle of that theoretical crevasse, prompting astrophysicists to spend decades wondering what happens to neutrons in their cores. Do they stay stiff, like LEGOs? Or do they squash like grapes and let their quarks flow? (When physicists talk neutron stars, familiar words take on new, very relative meanings. Even the lightest, coldest, flabbiest neutron star would be far denser, hotter, and stiffer than anything on Earth).

Kurkela and his colleagues believe they finally have enough information to connect the dots. The ultimate goal of neutron star research is to determine exactly how much matter pushes back at any given density and temperature—basically measuring how stiff or soft the neutrons are. The group considered more than half a million possible models and used a range of observations to challenge them.

On the denser side, astronomers have spotted hefty neutron stars with about two solar masses, which implies a certain stiffness required to carry such weight. At the other end, researchers have detected the rumblings of gravitational waves coming from mergers between less dense pairs of around 1.5 solar masses each. By observing how gravitational forces cause the stars to bulge (or not bulge) as they draw close, physicists can glean more information about their size and mushiness. Crucially, the team also added in mathematical calculations extrapolating from the theory of quarks and gluons to predict the speed of sound in neutron stars (another measure of stiffness).

When the gauntlet ended, the surviving models gave a clear answer: smaller neutron stars are probably neutrons through and through. But the heaviest known stars, those teetering on the brink of black hole-dom, should go soft in the middle—a clear sign of neutrons giving way to quarks. “If it looks like quark matter, it probably is quark matter,” Kurkela says.

Other physicists praised the group’s work for its thoroughness. “This is the first paper to really look at all of that together and boldly claim that these quark matter cores are almost certainly out there,” says Philippe Landry, a gravitational wave researcher at Cal State Fullerton. “It’s really pushing the envelope forward and forcing us to take stock of what we know.”

He’s not fully convinced, however, that it closes the case entirely. Landry and colleagues recently completed a similar analysis that folds in additional observations of neutron stars from the International Space Station. Their work supported a faster speed of sound in neutron stars, indicating a stiffness that might make quark matter cores less likely.

A larger catalog of neutron star observations will strengthen such analyses in the future. And improved theories of neutron stars will have far reaching consequences, even for much softer materials here on Earth.

Familiar elements like gold and platinum likely form in neutron star collisions, a theory validated by a gravitational wave detection of a merger also caught by telescopes in 2017. If you wear any fine jewelry, most its atoms were probably forged during just such a collision and its quarks may have lived in the neutron stars’ cores. But how many of those atoms came from a collision and how many came from elsewhere, Landry says, depends on whether that core was crispy or gooey.