Behind the Scenes at SpaceX’s Hyperloop Pod Competition 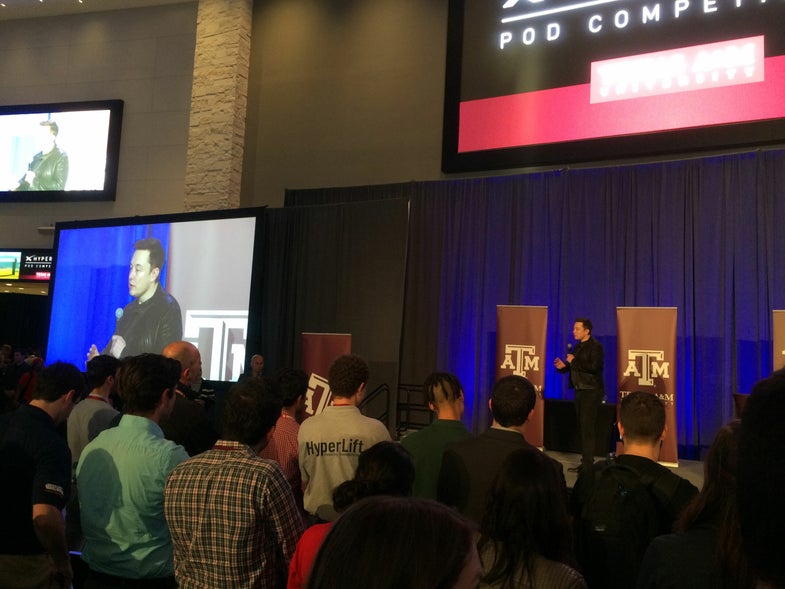 On the last weekend in January, more than 1,000 students from 27 countries and 20 U.S. states flew into College Station, Texas for a chance to win SpaceX’s first-ever Hyperloop pod design competition. The 120-plus teams gathered at Texas A&M University and pulled out all the stops to impress deep-pocketed tech companies who might turn their renderings into reality, but the ultimate prize went much further than any seed funding: a chance to build their pods and test them on SpaceX’s one-mile Hyperloop test track in California.

The competition’s first day was limited to a select group of attendees, from students to judges and even company reps (and a handful of journalists, for posterity’s sake), and the event center buzzed, the auditory overlapping of hundreds of voices with the sounds of whirring demonstrations and computer presentations. A fan favorite was the Lockheed Martin booth, where a line formed behind the company’s F22 Raptor simulation and students got to “drive” the stealth aircraft and take down enemy planes.

On the other end of the room, Arx Pax drew crowds to its Hendo Hoverboard demonstrations; the company simultaneously ran a smaller demo that showed how the same technology could be used to move Hyperloop pods. There was another video on loop of Tony Hawk riding the Hoverboard down a copper half pipe in Arx Pax’s California headquarters. Others waited in queue for a chance to see AECOM’s plans for SpaceX’s Hyperloop test track: two pairs of Oculus Rift headsets transported viewers inside the track and let them explore from different angles.

When the intercom crackled and a man’s voice made announcements, though, the room went silent. Students stopped to listen carefully for fear of missing important information regarding the judging phase of the competition on Friday. They’d all spent months working on their projects, poring over technical details, calculating costs to ensure the financial feasibility of their pods, and marketing their designs to draw sponsorships. Some teams were exclusively made up of graduate students, others were undergraduate only, and others had both. Most teams, though, were a carefully blended mix of engineering students from different disciplines paired with business or communications students to handle marketing efforts.

It wasn’t just sophisticated presentation boards that crowded the event center aisles — cookies, chocolates, and in the case of Spain’s Universidad de Alcalá table, an entire jamón Serrano (carving knife and all) — and drew passerby to each booth. Once the goodies had been enjoyed, interactive pod models, computer visualizations, and other user-friendly demonstrations showcased particular technologies — like magnetic levitation — used in pod designs.

On Saturday, when the competition opened to the public, participants were eager to explain all the unique features of their designs. Children walked around open-mouthed at the sight of so many rocket and car-looking toys. A young curly-haired boy leaving the SpaceX booth asked his father, “Do they live in space?” while a younger boy approached the booth wearing a silver and gold astronaut costume.

The students all possessed an almost tangible enthusiasm as they talked about their projects, and they captivated audiences with backstory chatter about the sleepless nights in lead up to the competition, the long flights, and cross-country drives to Texas. There was a sense that everyone knew they were taking part in something extraordinary. A few students mentioned that they put their schoolwork or dissertations on the back burner to focus on their Hyperloop projects, but felt it was worth it to be there that weekend.

“A lot of our professors complain that we aren’t paying enough attention to our own work and classes because we’re working on this project, but when we work on this we are applying what we learned in university,” said one team member from the University of Cincinnati. “Isn’t that the true meaning of education?”

Badgerloop, the University of Wisconsin’s largely undergraduate team, laid claim to one of the event’s most impressive booths. Throughout the weekend, team members, who were clad in matching red-and-black polo shirts and khakis, built an Oculus Rift-like headset out of cardboard to help explain their pod’s unique technology to the steady throng around their eye-catching display.

“I’ve been working on this full-time and I haven’t slept in a while,” said Maxwell Goldberg, a Badgerloop member and UW freshman. “I love how fast-paced it is because it’s totally new technology and it’s great to be doing something no one’s ever done before.”

Goldberg was referring to Hyperloop technology, of course, but it was a nod to his team’s potentially revolutionary design. According to Badgerloop, they built what they believe is the largest Halbach wheel in existence—and they brought it to the competition. In fact, the wheel, which is electrodynamic and provides levitation and propulsion for Badgerloop’s pod, requires so many large magnets that flight restrictions prevented them from taking it on board, so 22 team members packed into three vans and embarked on a 17-hour drive to College Station to attend the competition.

Each one-person, 15-foot pod would use 12 Halbach wheels to propel it along the track. According to Goldberg, their design can be scaled up to feature several rows with two seats per row. The team’s pod was also among the designs with the lowest costs — a steal at $37,517, which includes fabrication and transportation to the competition this upcoming summer. As the awards ceremony loomed near on Saturday, Popular Science asked the team members how they felt.

“I’ve enjoyed working on it and the personal reward is more than worth it for me,” Technical Director Duncan Adams told Popular Science, his teammates nodding in agreement. “I’ve put thousands of hours of work into it myself and seeing it all come together is enough for me. I hope we get a sponsor because I would love to actually build it, so as long as we get to do that I don’t think it matters so much if we win.”

Hours later, Badgerloop learned its fate: the team placed third overall, and will get to build its pod. The University of Cincinnati team missed cracking the top five but was still chosen to continue onto the next phase of the competition. Both teams, along with at least 20 others, will now have a chance to test their pods in SpaceX’s one-mile Hyperloop track near company headquarters, which is located about 15 or so miles outside of Los Angeles.

First place went to the Massachusetts Institute of Technology, which unveiled a streamlined design that features magnetic levitation and a fail-safe hydraulic braking system.

During his keynote address on Friday, U.S. Secretary of Transportation Anthony Foxx echoed that sentiment and said that historically, the government hasn’t embraced new and unfamiliar proposals.

“We have in our department of transportation a responsibility not just to continue with conventional forms of transportation, but we have a responsibility to continue nudging the future along and stretching along with innovators and folks who think broadly about how we can move differently and better and more efficiently and cleaner in the future,” said Foxx, adding that the weekend was a special moment in transportation history. “One of great things about this competition is everybody wins because everybody here is involved in envisioning the future.”

Foxx then quoted Elon Musk’s white paper, a clarion that introduced the world to the Hyperloop concept in 2013. SpaceX had made clear from the beginning that Musk would not be in attendance, but that didn’t stop students from tweeting about the competition using #whereisElon. At the end of the weekend, moments after the winners had been announced, Musk stepped onto the stage in a black leather jacket and black pants and received an automatic standing ovation and raucous cheers from the audience. It was hard to tell whether the winning teams were more excited about winning or about seeing Musk in the flesh.

To the students’ delight, and after some prompting from one student with a rather bold request, Musk agreed to sign everyone’s awards—which were made of the type of steel that will be used in the Hyperloop test track and were in the shape of the tube.

The SpaceX CEO was also clearly relishing the creativity and buzz the competition generated, and he and stuck around to take questions, which included the inspiration for creating the Hyperloop, his next big idea, and why he changed the competition rules one-and-a-half weeks before the event.

“It’s exciting and inspiring to think about new forms of transport or new technologies that can make people’s lives better, wherever they happen,” Musk said. “I think that the work that you guys are doing is going to blow people’s minds.”