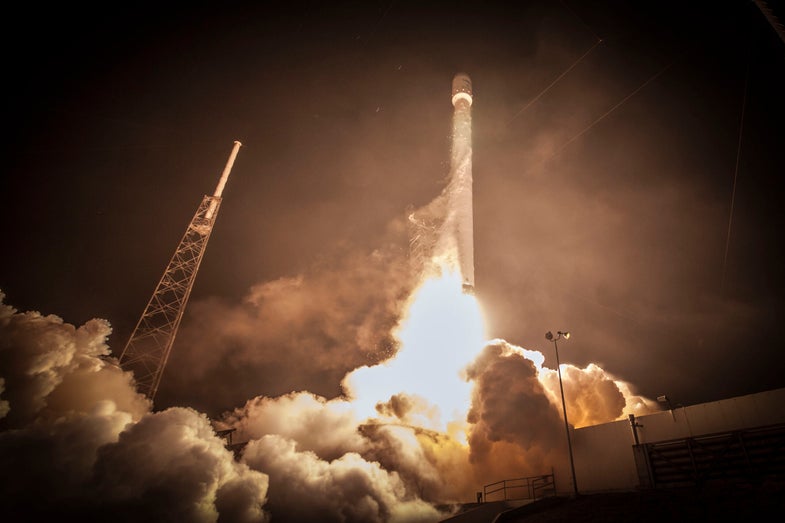 The Falcon 9 rocket is at its launch pad at the Cape Canaveral Air Station in Florida. Its companion, the autonomous floating barge ship “Just Read The Instructions,” is in its more or less stable catching position in the Atlantic Ocean. Yes, it’s time for another SpaceX rocket landing attempt, and excitement is high that this time the company will stick the touchdown.

So far, the Falcon 9 is scheduled to take off at 4:33 p.m. Eastern Time this afternoon. The launch will be SpaceX’s sixth commercial resupply mission for NASA, in which the company is helping to send a number of much needed supplies to the International Space Station over the course of many months. This time around, a few of these provisions include materials for a number of experiments sponsored by CASIS, the non-profit that governs the ISS laboratory. One experiment is looking at the effects of radiation on synthetic muscles, while another is researching how blood vessels flow during long-duration space flights.

Any time people or much-needed lab supplies make the trip from Earth to the ISS, it’s always important news (and who doesn’t love a good rocket launch?). But today’s mission is all about what’s going to happen after that Falcon 9 fires off into the sky. Once the rocket successfully lofts its 4,300-pound payload to space, the rocket’s first stage—the majority of the vehicle’s fuselage that contains its primary rocket engines and holds much of its fuel—will try to autonomously guide and land itself onto SpaceX’s autonomous drone spaceport in the Atlantic. Four X-Wing style “hypersonic grid fins”attached to the first stage’s body open and close during the descent, helping to slow and steer the rocket to its final destination.

If it works, the implications are huge. Until now, rocket launches have been something of a one-and-done stunt. With the exception of the partially reusable Space Shuttle, pretty much all rockets are unrecoverable after they blast off; most of their bodies are either destroyed or lost once they launch into the stratosphere. It makes transporting payloads to space extremely pricey, as an entirely new rocket is needed for each subsequent rocket launch.

But Elon Musk isn’t content with starting over again each time he wants to get something into lower Earth orbit. If he can demonstrate that his rockets can land safely after they’ve made the journey to space, then he can potentially reuse them to launch future missions. It ushers in an era of space flight that’s more akin to air travel than to rather expensive fireworks shows. Reusable rockets could make getting to our neighborly vacuum downright cheap, bringing down the cost of satellite launches and opening the door to space tourism not solely reserved for the 1 Percent.

SpaceX tried their rocket landing once before in January, but things don’t quite go to plan. After launching the rocket, the first stage attempted a landing on one of SpaceX’s floating spaceports, and while it hit its mark, it did so a little too fast. The vehicle slammed into the ship, shattering into thousands of pieces and prompting Musk to delightfully coin the term “rapid unscheduled disassembly event.” Later, Musk revealed that the the vehicle’s grid fins ran out of hydraulic fluid during the descent. The fins are powered by an open hydraulic system, and too much fluid sloshed out on the way down, cutting off power to the rocket’s ability to steer. But the SpaceX founder assures us that this time around, the rocket is packing enough fluids.

Check out this handy infographic of how the launch and landing are theoretically supposed to occur.