Two Become One: How the Apollo Spacecraft Stuck Together

Each Apollo lunar missions was essentially a series of manoeuvres that had to be executed nearly perfectly for a successful,... 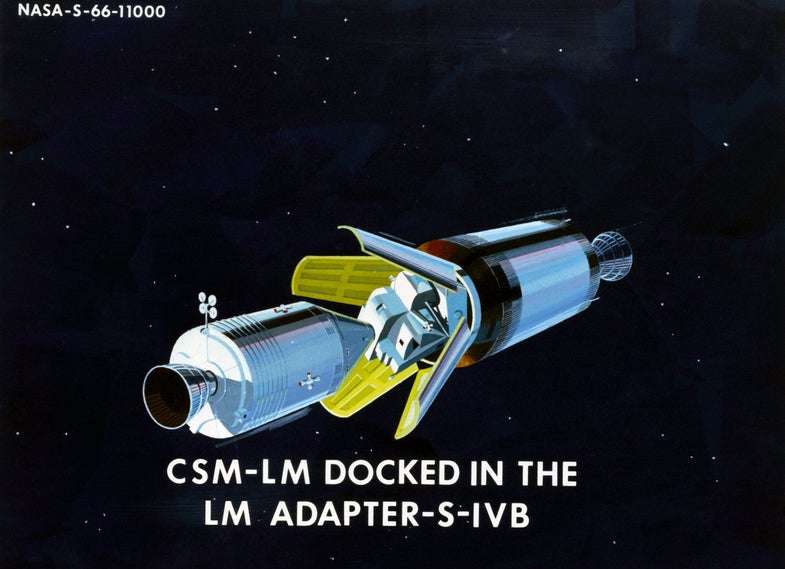 Each Apollo lunar missions was essentially a series of manoeuvres that had to be executed nearly perfectly for a successful, nominal mission; Apollo 13, of course, is the notable exception. Among those vital manoeuvres was transposition and docking, the crew’s only chance to recover the lunar module and get it ready for the actual lunar landing manoeuvre. No mission could hope to land if the crew couldn’t pick up their lunar module, and on Apollo 14, they almost didn’t. 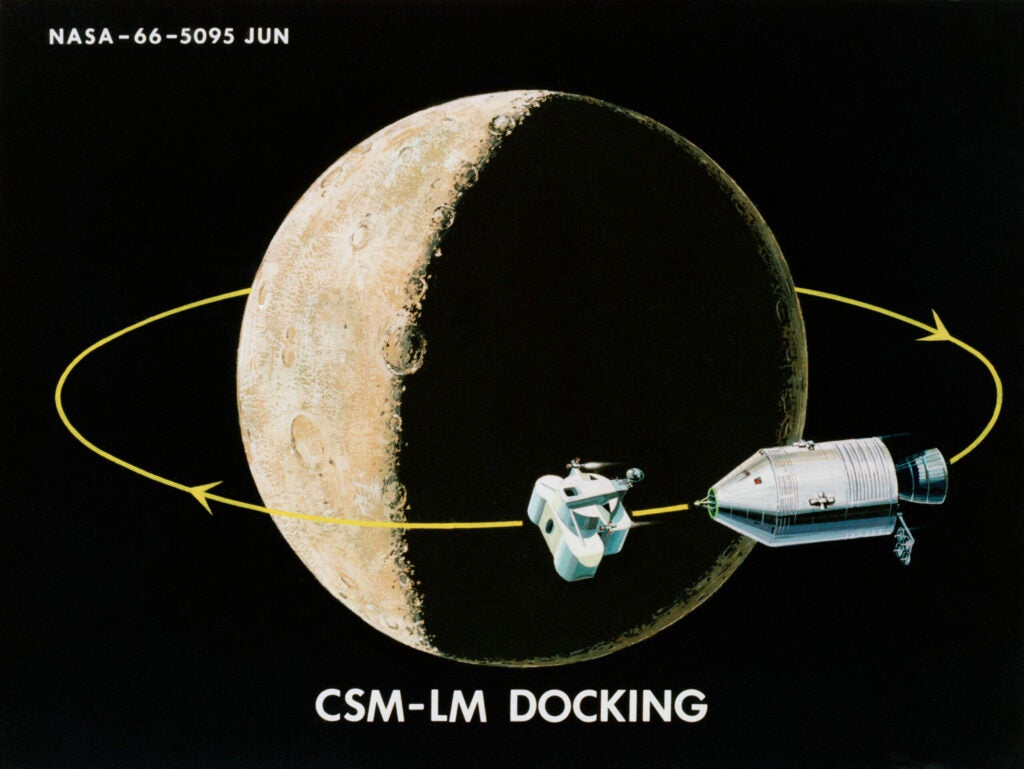 The decision to use lunar orbit rendezvous as the mission mode for Apollo meant that two docked spacecraft — the lunar module (LM) and command service module (CSM) — would arrive at the Moon. Once there, they would separate so the LM could land while the CSM waited in orbit. After launching from the lunar surface, the LM’s ascent stage would rendezvous and dock with the waiting CSM, then the astronauts would transfer back into the main spacecraft and head home.

But the LM and CSM didn’t leave Earth in their lunar landing ready configuration. Imagining a upright Saturn V rocket, the LM left the Earth packed in a spacecraft launch adapter above the S-IVB stage and below the CSM. That whole portion of the rocket — S-IVB, stored LM, and CSM — ended up in Earth orbit. Once there, the S-IVB’s engine lit a second time for the vital translunar injection burn that sent the crew out of orbit and off towards the Moon.

Once the crew was on their way to the Moon, it was time to get the LM and CSM docked, a manoeuvre properly called transposition and docking. First, the command-service module separated from the S-IVB stage using its reaction control system thruster; firing the service module’s main engine so close to the LM would probably have burned the lunar module pretty badly. From there, the command module pilot had the job of turning the spacecraft around and closing the distance between the two vehicles, taking care to line up the CM’s docking probe with the LM’s drogue.

The Apollo spacecraft in launch configuration

The docking probe sticking out from the CM had three latches. As the tip of the probe went into a hole in the conical drogue on the LM, a pneumatic system actuated by nitrogen gas moved the latches from their cocked into the locked position. This in turn activated a probe retract system that drew the two vehicles together. At the same time, a tunnel ring on the LM activated twelve latches on the CSM probe to form a tight pressure seal between the two spacecraft.

Once docked, the newly-created tunnel between CSM and LM was pressurized through a valve in the command module side before the hatch could be safely removed to reveal the tunnel. After double checking that the twelve latches are securely locked, the crew recovered and hooked up umbilicals to supply power to the LM release mechanisms that released it from its storage place. With the LM now free of its shroud, the combined CSM and LM were ready for their trip to the Moon. As was the S-IVB, though it’s mission culminated in a crash rather soft landing on the Moon.

With the actual lunar landing dependent on recovering the LM from its stowed position, a lot depended on the transposition and docking manoeuvre. There was no provision to perform an EVA to transfer astronauts into the spacecraft at that point, so a failure to recover the LM meant no lunar landing, and this almost happened to Apollo 14. 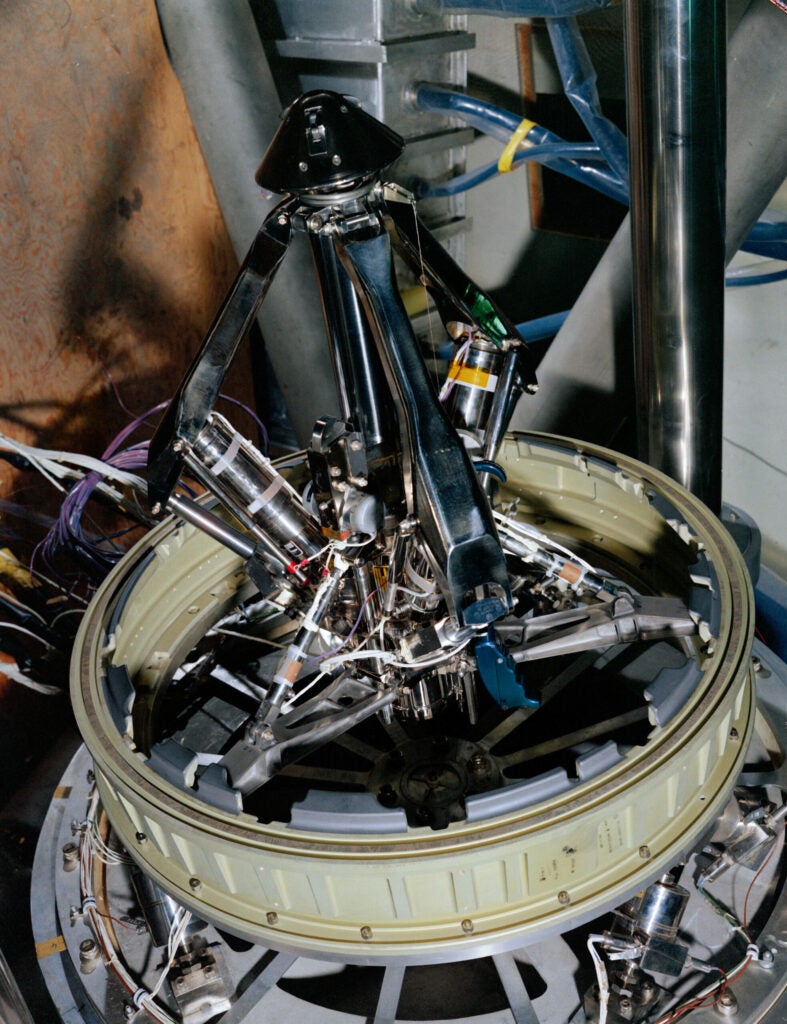 Like they did for every mission phase, astronauts trained for transposition and docking such that when it came time to extract the LM it looked and felt as familiar as the simulator. But on Apollo 14, CMP Stu Roosa couldn’t get the spacecraft to stay together. Going in for the docking he said that “everything looked just real fine coming in on it. I’d say the – the whole docking operation was Just so much like the CMS [simulator] that it was hard to believe.” He guided the CM slowly to the LM going about 2/10th of a foot per second, but when the docking probe hit the drogue it seemed to bounce back.

Knowing the spacecraft hadn’t firmly docked, Roosa backed up and tried again, this time going a little faster at one foot per second. Which felt fast; he told mission control it looked as though he was “going to run right through the thing.” But even with more speed the result was the same. The latches didn’t catch and the CM kind of bounced back away from the LM.

Instead of ramming the CM into the LM again and again to try and force a connection, Roosa backed up and conferred with ground crews in Houston about what might be going wrong. Under Houston’s advice he tried again with the same result. The CM bounced off the LM. But there was something different. After this third attempt Roosa noticed shallow scratches on the LM drogue assembly. Describing them to Houston, ground crews confirmed that the marks came from the cocked latched scraping against the drogue. So the latches were in the right position for a docking, they just weren’t locking for some reason.

After two more unsuccessful attempts, Houston had Roosa try a hard docking procedure. He maneuvered the CM to bring its docking mechanism against the docking ring on the lunar module then manually retracted the docking probe. This forced the docking latches to engage and pull the two spacecraft together. 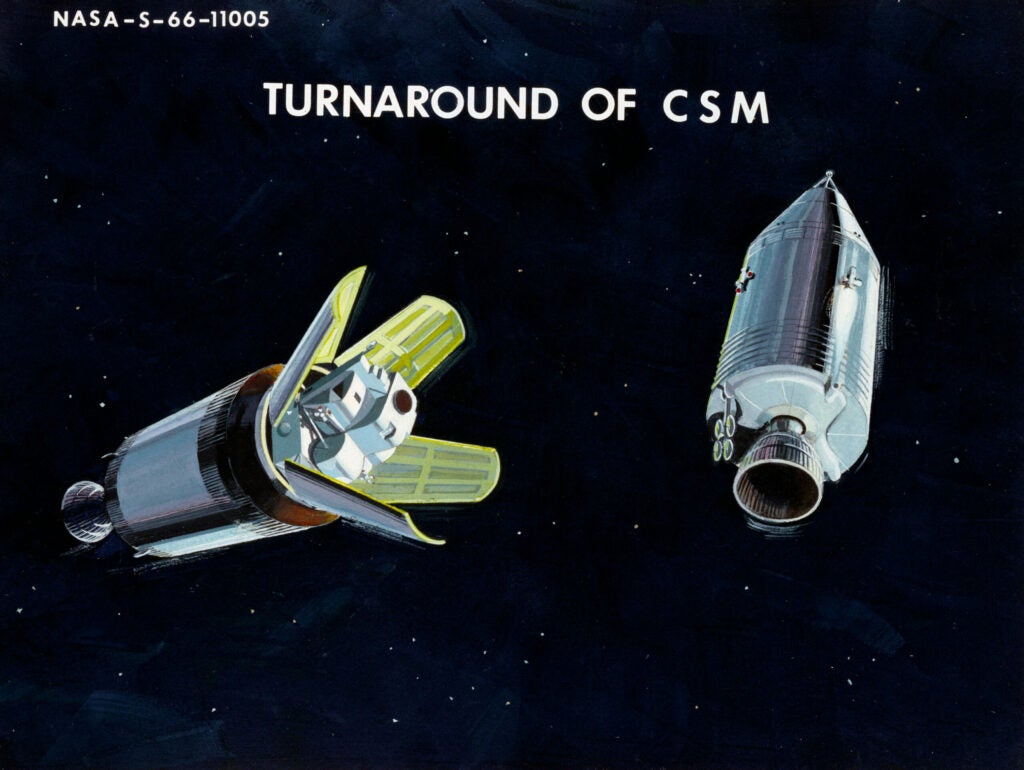 Aritst’s concept of CM turning around to capture the LM

Docking achieved, the question became what caused the latches to fail; no one was keen on a repeat anomaly when the two spacecraft had to dock in orbit around the Moon. The crew brought the probe and drogue assembly into the command module and inspected it, calling down to Houston what they saw along with a live TV transmission. Again, engineers focussed on the scratches as evidence that the latches were in the right place but just not locking.

Considering the problem raised a few possible causes. One was that a side load on the docking probe was causing the latches to jam, something technicians had seen during earlier qualification and acceptance tests. Another possibility was that some small foreign objects, even something as innocuous as bits of dirt or grime, ended up lodged in the probe in the right way to prevent normal operation. But without an obvious flaw NASA determined that the anomaly wasn’t likely to jeopardize a second docking, so Apollo 14 went ahead with the agency’s third successful lunar landing mission. 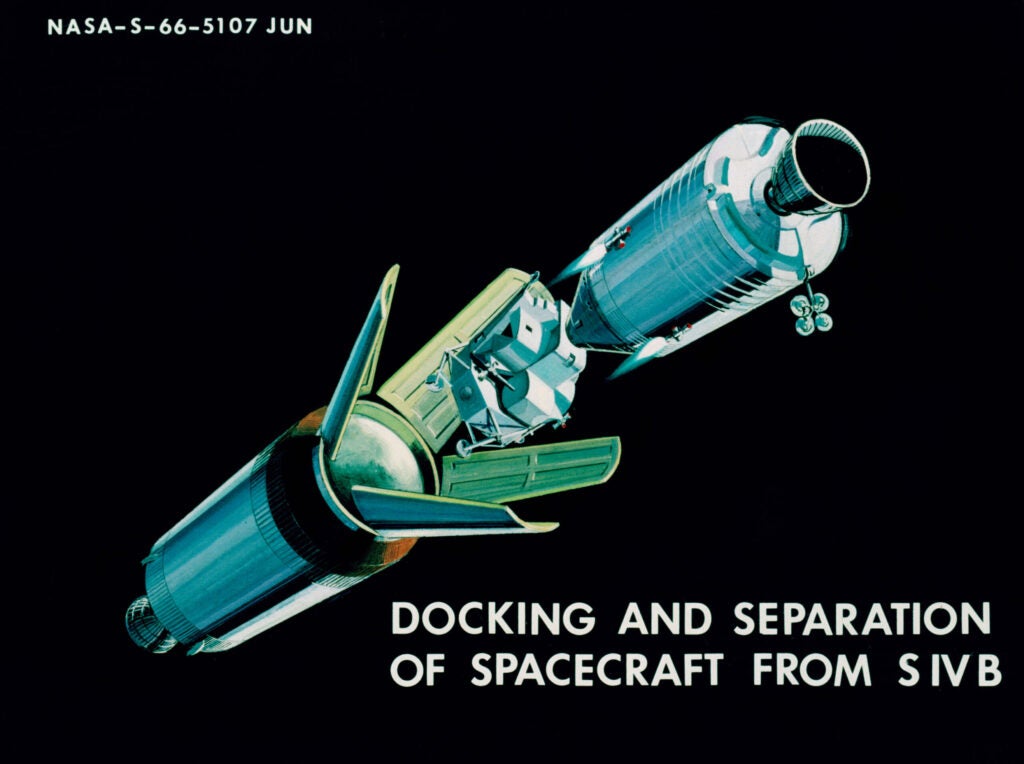 Once the CM and LM were docked, the last step in this phase was to separate the LM from the S-IVB, leaving the crew with a Moon-ready spacecraft. The whole transposition and docking took about ten minutes.

When Apollo 14 splashed down on February 9, the crew had the probe with them for further analysis. Disassembly revealed iron oxide, double-back tape, and cadmium particles in the probe mechanism. But they were tiny — the largest of the twelve particles found was just 0.060 inch long — and none were strong enough to stop the docking probe from latching. They couldn’t explain the anomaly.

A firm explanation was never found. NASA eventually concluded that the failure was due either to a foreign object or a mechanical problem prevent the latches from functioning normally. There were small adjustments made to the docking assembly after the mission focused on negating the possibility of sideways forces affecting the latches. The testing process was also changed to qualify each probe for horizontal and vertical movements. And finally, capture latch timing tests were added to the pre-launch countdown as one final checkout before launch.

The docking anomaly didn’t’ resurface. On July 26, 1971, the crew of Apollo 15 successfully recovered their LM and four days later successfully landed on the eastern edge of the Moon’s Imbrium Basin in a region known as Palus Putredinis.

Are you an Apollo 14 fan? Or maybe just an all-around Apollo fanatic who would love to relive NASA’s third successful lunar landing mission? I’m live tweeting Apollo 14’s mission! We launch at 4:03pm EST Sunday January 31, and we’ll follow the flight through splashdown on February 9. Follow me on Twitter — @astVintageSpace — for all the updates! And be warned: there will be a lot of #Apollo14 tweets!