No more drinking "fresh" java from a plastic pouch 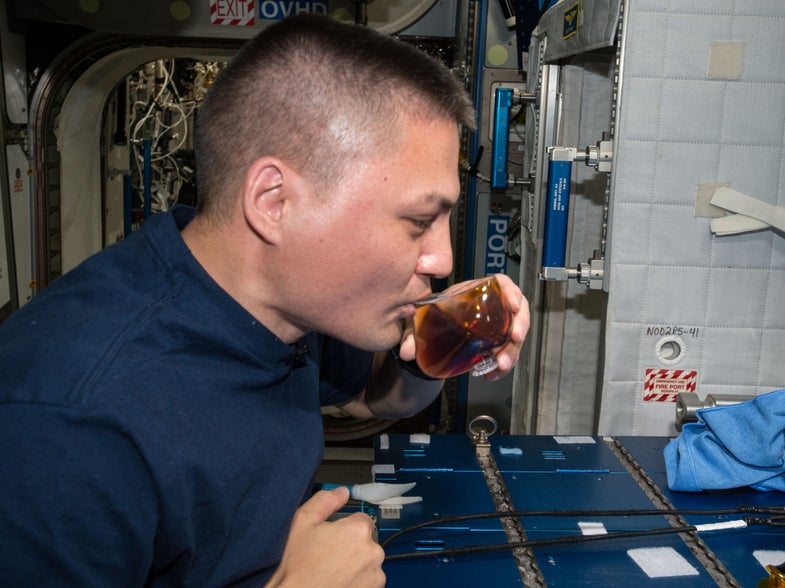 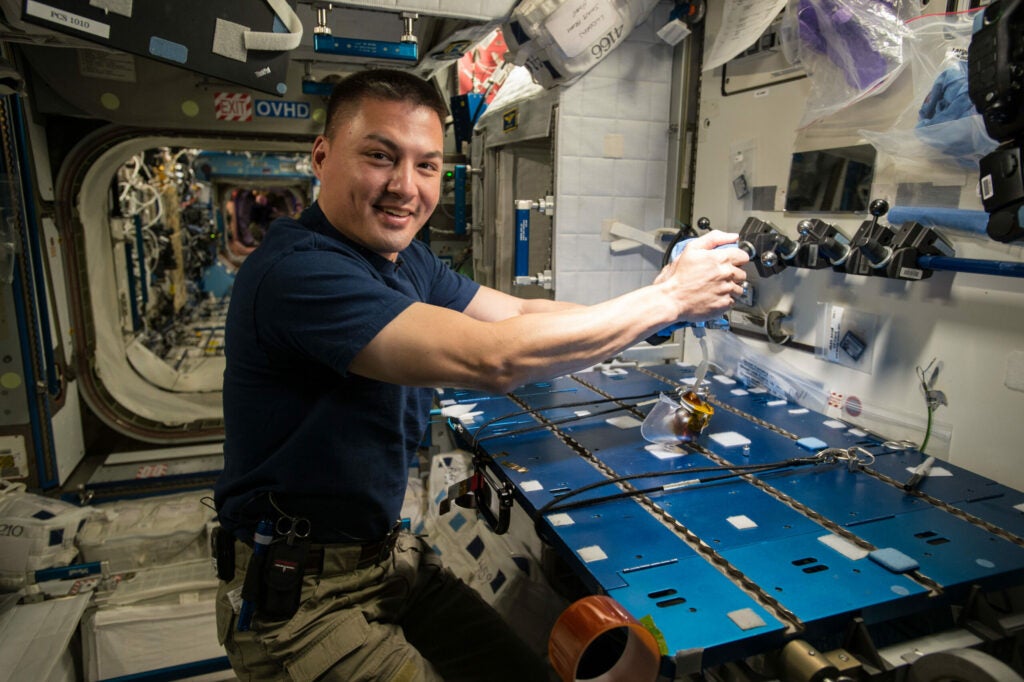 Kjell Lindgren enjoys a hot cup of coffee in space

Of sacred morning routines, few stack up to the ritual of rolling out of bed and sipping that first sweet, sweet cup of steaming coffee. Unless you’re an astronaut on the International Space Station. One of the small yet significant personal sacrifices they make for space is: there’s no steaming mug up there.

Technically, there is coffee on board the station, but it’s made by squeezing hot water into a pouch of custom blended, freeze-dried coffee, and sipped through a straw. It only barely clears the bar for being a comforting drink, and no savory coffee smell makes it through that bag, either.

But thanks to a new version of a specially designed cup sent to ISS last year, astronauts now have the ability to brew a fresh cup of coffee.

Astronaut Kjell Lindgren demonstrated space’s first “pour-over-style” coffee in a video uploaded Friday by NASA. Drew Wollman, a materials and mechanical engineer at Portland State University and IRPI, LLC, along with IRPI senior scientist Mark Weislogel, designed and produced the brewer in only one week last April after he met up with Lindgren in Houston and learned how to use the space cup. Lindgren inquired whether there was any way to brew a drink directly into the cup, rather than squeeze it in from a pouch.

“We said we’d see what we could do, but when you make a promise to an astronaut you have to keep it,” Wollman said. 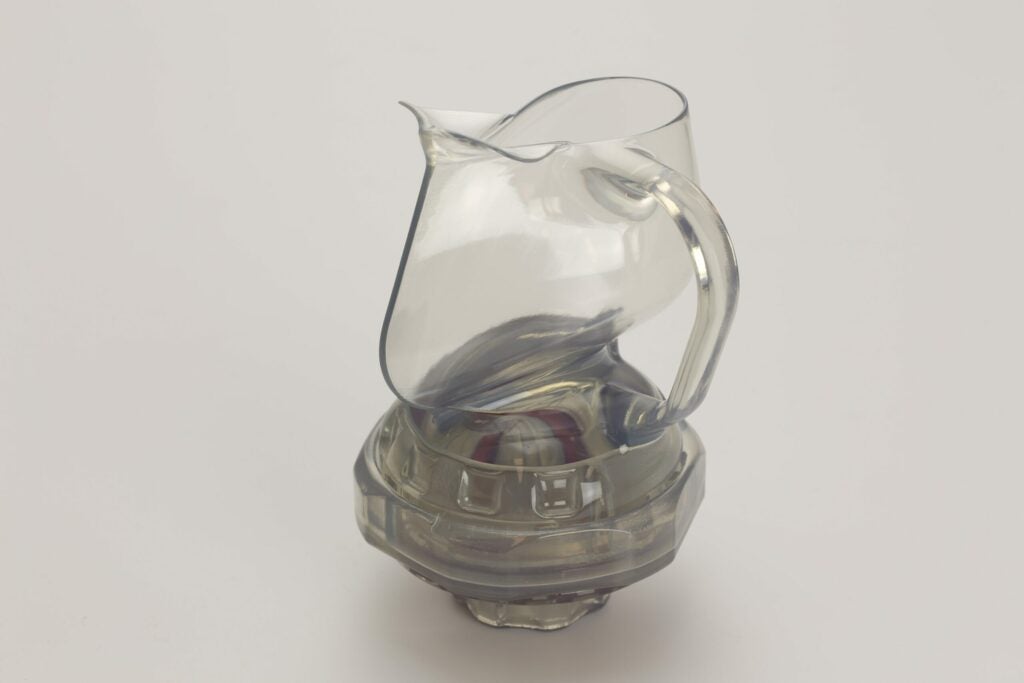 A modification to the bottom of a cup designed to hold liquids in place while in microgravity allows astronauts to brew coffee directly into the cup, similar to how single-serve coffee machines (e.g. Keurig) produce a serving.

Speaking from Houston, Lindgren said coffee is very important to him. He brought up a stash of single-serve coffee pods when he went to the Space Station, in anticipation of receiving the modified space cup in his personal items package. While he waited, he experimented with injecting hot water directly into the pods and then into the cup, which wasn’t great.

“It’s great to be home and to be able to use our home coffee maker, but I’m a little embarrassed to admit that I miss the coffee the food lab made for me in space,” Lindgren laughed. “The smell of coffee is one of the most enjoyable things about it. Getting to experience fresh coffee was a big deal.”

The cup keeps liquids from floating away, via the design of its narrow-angled sipping side and pot-bellied bottom. Take a little sip at the spout, where fluids creep up through a combination of microgravity and capillary forces, and the drink flows itself into your mouth. And with your nose positioned right over the top of the cup, you’re able to smell what you drink.

Along with the cup, which was first used last year to demonstrate the capillary action of liquids inside that container while in true microgravity, astronauts also enjoyed brew from the ISSpresso. That machine is specially designed to brew espresso coffee with fresh grounds in space — albeit into the ubiquitous consumables pouches.

Wollman’s modification adds an attachment to the bottom of the cup designed to hold a single-serve coffee capsule. Screw on a large syringe filled with hot water, force the water over the grounds and through a filter, and fresh coffee flows directly into the cup.

Unless you’re Lindgren, whose experiment with the technique almost resulted in free-floating space coffee.

“He was brewing it too fast. You have to go slow,” Wollman said. “Think how long it takes on Earth for coffee to filter through grounds. It shows the everyday things we take for granted when you don’t have gravity to think about.”

Lindgren finally got his cup brewed only six hours before he was scheduled to return to Earth.

Lindgren had good reason to be in a bit of a rush: the cup made it just in time. After first being destroyed aboard SpaceX’s CRS-7 mission, delayed again on the CRS-8, Lindgren’s package finally made it to the ISS on Cygnus. Lindgren demonstrated the device only six hours before he was scheduled to return to Earth on Soyuz.

“I wanted to honor [Drew and Mark’s] work by being able to use it,” Lindgren said of his last-minute demonstration. “Part of why we fly is to take time to think about how to do things differently. It’s part of the adaptation process to making us a space-faring species.”

Lindgren left the cup behind, along with his cache of coffee pods, for his crewmates to take advantage of.

Next time the aroma of fresh coffee draws you out first thing in the morning, think about its true power: it’s so compelling that one of the last things an astronaut made time for in space before coming home was to brew himself fresh, hot coffee—in a cup. 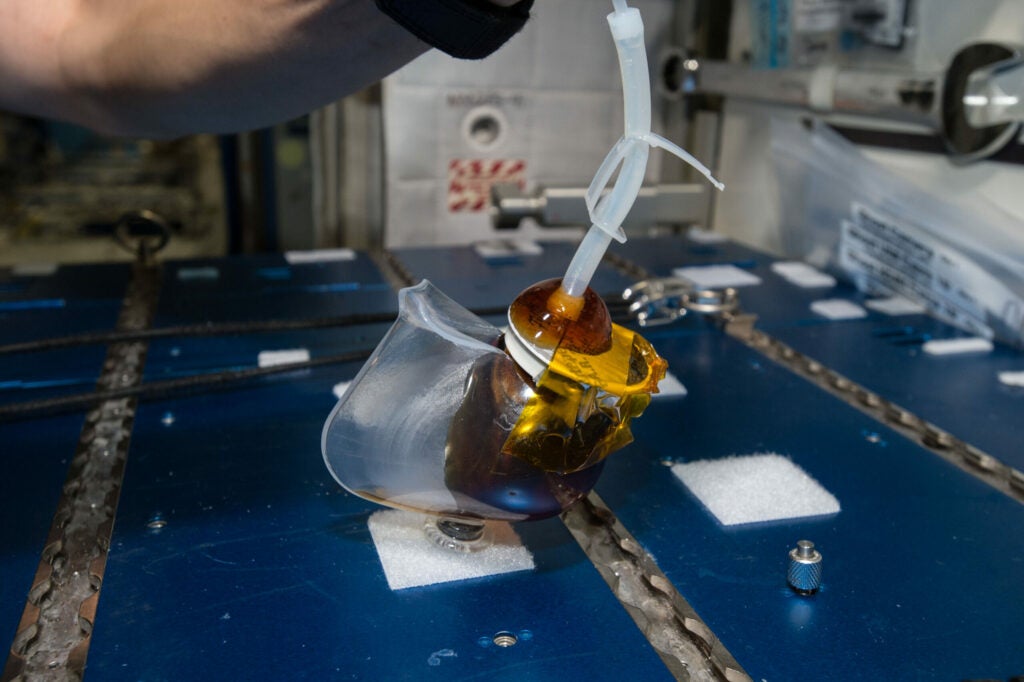