On a vomit comet 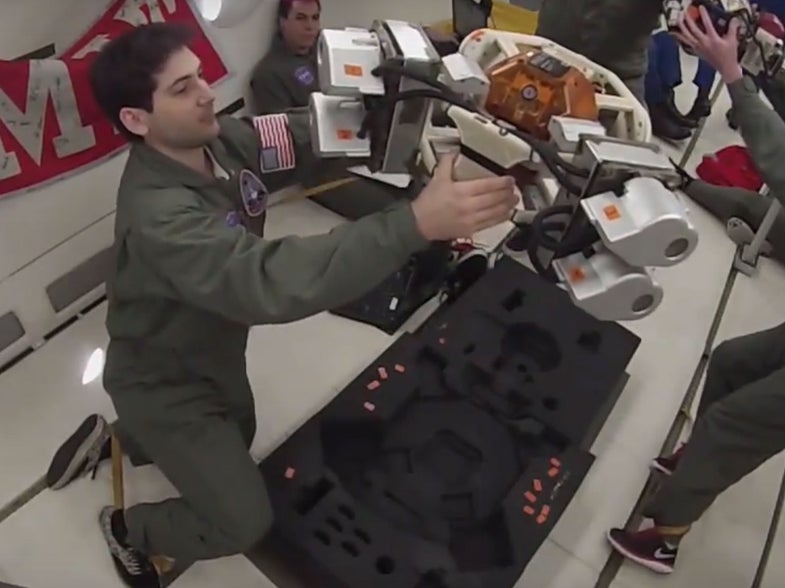 When astronauts go on spacewalks, they use jetpacks. Not the fire-spewing kind, but a backpack that lets out streams of nitrogen gas, which astronauts can use to steer themselves to safety. These devices, called Simplified Aid for EVA Rescue (SAFER), are intended for emergencies only. But now a company called Draper is designing jetpacks that astronauts could potentially use to do work in space.

In preparation for a hypothetical trip to Mars, NASA wants to send astronauts to visit a nearby asteroid. The controversial proposed Asteroid Redirect Mission tentatively scheduled for sometime in the “2020s” would give astronauts an excuse to take a ride on NASA’s Space Launch System and Orion capsule, which are currently in development, while also letting humans explore an asteroid for the first time.

Unlike Mars, asteroids don’t have a lot of gravity, and the “asteroid” that the astronauts would visit is really just a 6-foot boulder at best. How can the astronauts explore this boulder without floating away? Tethers might me one solution, and/or installing anchor points into the rock. But jetpacks are among the more exciting ideas for how to navigate around an asteroid.

Pretend you’re an astronaut and you need to take a sample of an asteroid. Perhaps you would use a shovel or a hammer and chisel. The problem is that while you’re pushing that tool into the rock, there’s no gravity holding you in place, and the force makes your body want to float away from the asteroid.

To counterbalance that, Draper is working with MIT to develop hardware that can sense your position is changing using control moment gyroscopes (CMGs), and then use thrusters correct for it.

Michele Carpenter, Draper’s principal investigator on the project, told Popular Science in an email that “The CMGs enable a finer level of control by operating continuously. Thrusters aren’t well suited for this function because they are discrete actuators (they need to turn on and off). If an astronaut tried to use them to stay in place, they would repeatedly bounce back and forth while the thrusters turned on and off.”

The team just flew a test version on a parabolic flight that simulates microgravity. As Draper explains in a press release:

Carpenter says they were overall pleased with the outcome. They’re hoping to do more of these tests in the future, since parabolic flights can only provide a few seconds of weightlessness at time. Eventually, they’d like to try it out on the International Space Station.