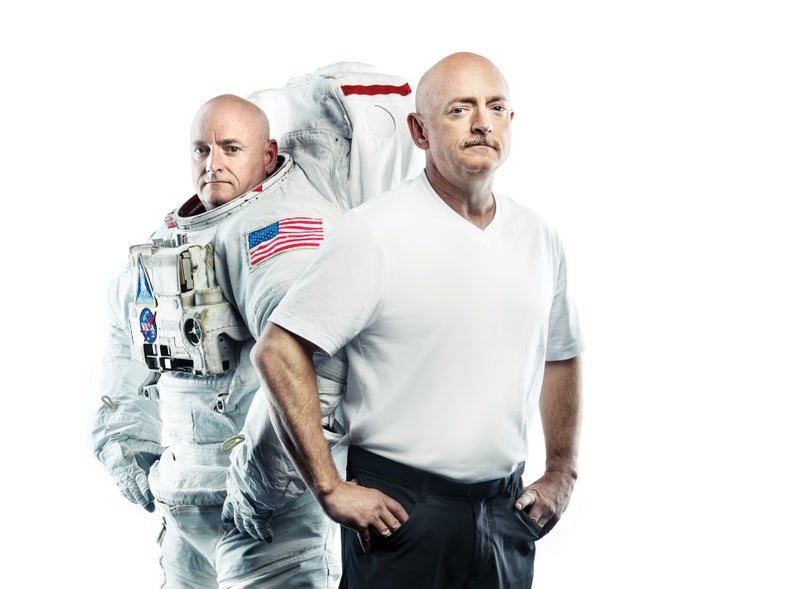 Mark and Scott Kelly are the subjects of the first twin study about space exploration. Photograph by Marco Grob
SHARE

When astronaut Mark Kelly says, “I’ve spent a lot of time on Earth,” it’s relative. He’s been to the International Space Station four times for short missions. His twin brother, Scott, is about to wrap up a full year in space, the longest stint of any U.S. astronaut. To understand how life in space affects humans, scientists are investigating how the twins’ bodies now differ—information that might influence the future of long-term space exploration.

In Mark’s own words:

I always thought scientists needed a large sample size. It turns out when you don’t have that opportunity, a small sample can still lead to really useful science. In our case, it’s just one sample: Scott as subject, me as control. I’ve spent only 50-something days in space. When Scott gets back in March, I think he will have spent something like 3 percent of his life there.

I have, on multiple occasions now, given massive amounts of blood. I’ve also given saliva, stool, and urine samples—sometimes 24 hours’ worth. And then, when I go to Houston every few months, I get MRIs of my brain and heart, and ultrasounds of my cardiovascular system and optic nerve. They send the ultrasound machine right into the goo on your eye. For some tests they put me in a contraption—a lower-­body negative-­pressure device—and have me take nitroglycerin. I don’t even know what experiment it’s for.

“NASA is hoping to learn that space doesn’t have that big of an impact on astronauts. That would be great. But I think the reality is that it does, and so we’re going to have to learn how to mitigate those effects.”

Scott’s also drawing his own blood and sending it down to the ground for analysis. And there’s an ultrasound machine aboard the space station. One of the researchers sent my brother an email that said they would have more scientific and medical information on Scott and me than on any other person, ever. The big question for us is, how much do we want to know? They’re looking at not only our genetic profile but also which genes have mutated. If a gene has turned on, then the risk for diseases like Alzheimer’s and cancer really goes up.

I imagine that NASA is hoping to learn that space isn’t a big deal, that it doesn’t have that big of an impact on astronauts. That would be great. But I think the reality is that it does, and so we’re going to have to learn how to mitigate those effects. Maybe we shield crew members from radiation. Or maybe we could figure out a way to repair our genes. Think about the implications for your average person on Earth.

I applaud the enthusiasm of people who would sign up for a one-way trip to Mars, but they wildly under­estimate the issues involved, not only to their physical but also to their mental health. Imagine if you were plopped down in a Winnebago in Death Valley, left there for the rest of your life, and had to put on a suit to go outside? The novelty would wear off. But I do think the first person to walk on Mars is alive today.