Two private spacecraft are now attached to the space station; more will follow 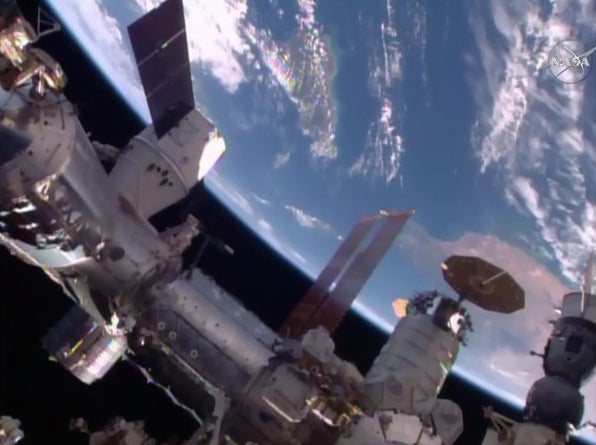 See that? That’s an image of the International Space Station in orbit from NASA’s live webcast earlier this morning. To the casual observer it may not look much different than countless other images we’ve seen in the 15 years the space station has been active. But it’s a historic image for one big reason: we’re looking at SpaceX’s uncrewed Dragon spacecraft attached to the station on the very left (the squat, white funnel-like craft with the solar fin sticking out) and Orbital ATK’s uncrewed Cygnus to its right (the one that looks like it has an umbrella). This is the first time these two private spacecraft have both been attached to the space station at the same time. It hopefully won’t be the last.

Both SpaceX and Orbital ATK are the only two private companies that have successfully ferried cargo to the International Space Station so far, and only in the last few years. For most of the space age up until now, these roles were fulfilled by government-owned and commissioned craft. But thanks to a variety of factors, including funding from NASA, that’s changing rapidly.

Now these private space companies are taking over more and more space station re-supply duties, and are set to be joined soon by another company, Sierra Nevada. If the trend continues, the rare sight of several private spacecraft docked to the space station at the same time should become commonplace. 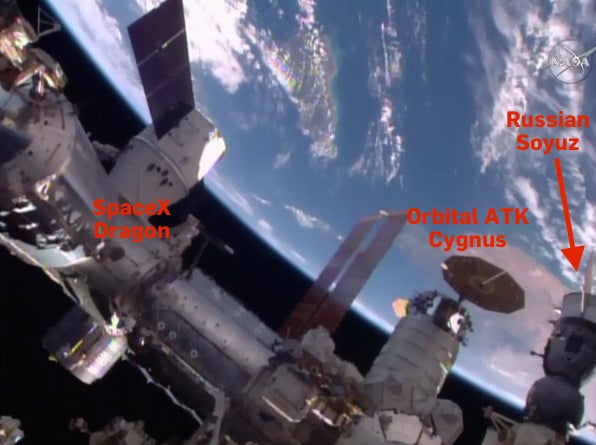 This is the first time the SpaceX Dragon and Orbital ATK Cygnus spacecraft have been attached to the International Space Station at the same time.

Fittingly, on the very right of this image is the Russian Soyuz capsule, the government-owned craft that has been responsible for ferrying all astronauts to the space station in recent years (it’s the bulbous gray craft with a white hat). If the privatization of space travel continues at its current pace, by 2017 or 2018 the Soyuz will also be joined and perhaps supplanted by SpaceX and other companies when it comes to transporting astronauts into space, too.

And while there are some legitimate concerns that come with outsourcing space travel to private entities, the fact that there are increasingly more options for getting things and people into space is ultimately a win for humanity — proof that civilization is progressing to the stars, one mission at a time.