Why Lockheed Martin Is Blasting The Orion Spaceship With 1,500 Speakers

A new way to make sure spacecraft are safe 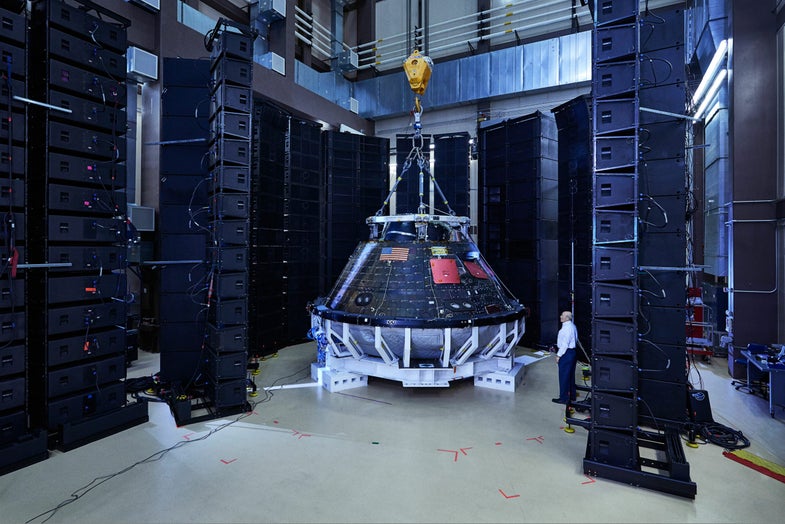 When the Orion crew capsule carries astronauts into space sometime in the 2020s, it’ll ride on the most powerful rocket NASA has ever created. As that rocket blasts through the atmosphere, Orion is going to get a little shaken up. Part of those vibrations will come from the rocket’s mighty roar. And just like a loud concert can rattle your bones, the noise from the launch could shake apart a spacecraft if it’s not built properly.

That’s why Lockheed Martin, which is building the Orion capsule, is blasting a test module of the spacecraft with more than 1,500 speakers. The first test took place on March 2 in Colorado.

Acoustic testing is pretty standard for spacecraft, but this test was different from previous ones.

Normally, these sorts of tests have to be done in a special acoustics chamber. The walls of the facility reverberate sound waves in a way that replicates the distribution of acoustic energy that the spacecraft would experience during launch. Sometimes these tests crack brackets or even the spacecraft’s structure, revealing the vehicle’s weak points so they can be fixed before it gets to the launch pad.

The only problem with that kind of test is that oftentimes, the spacecraft has to be taken apart, shipped to the test center, reassembled, and then tested to make sure it’s operating properly before it can be submitted to the acoustic test. All of that can be expensive and time-consuming.

Instead, Lockheed wants to take the acoustic test to the spacecraft. In last week’s test, they set up 1,510 speakers in a ring around an Orion module, then blared 143 decibels at it. That’s similar to standing about 50 feet away from a jet engine, Shane Roskie, Lockheed’s test engineering and launch operations senior manager, told Popular Science.

During the test, Roskie and the rest of the team had to stand at the other end of the building wearing ear protection. “You can definitely feel it,” said Roskie. “It made me think I should back up a little.” 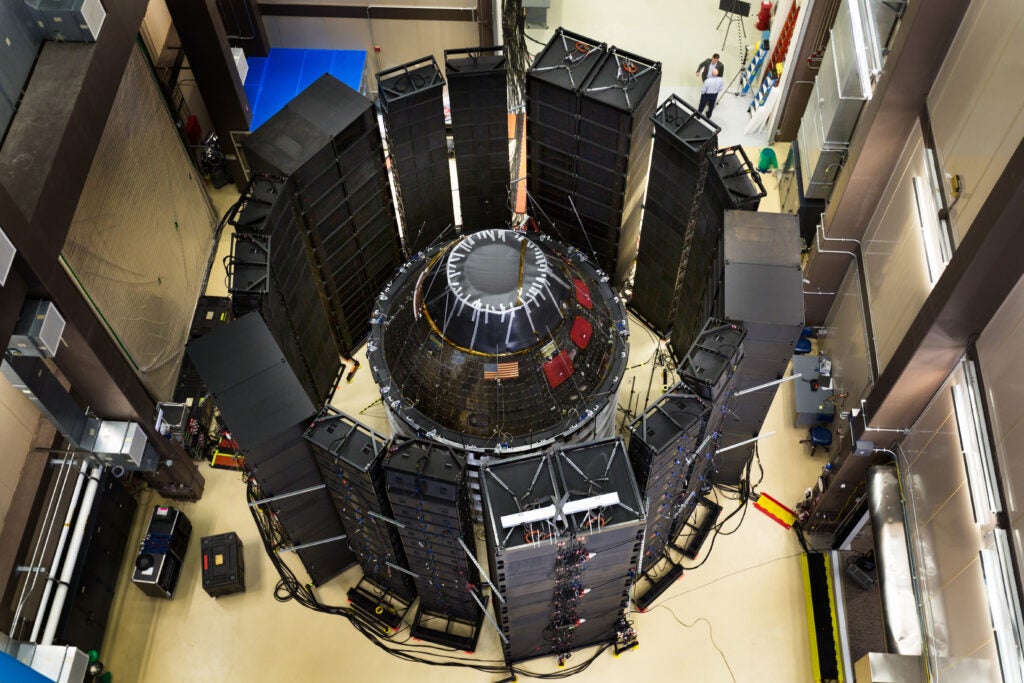 The Orion acoustic test, as seen from above.

The speaker system could potentially be set up in any kind of space–provided, we assume, there are enough electrical outlets nearby. All those black boxes, each of which contains multiple speakers, pack into 3 semi-trailers.

But Lockheed’s new system isn’t just a bunch of speakers stacked on top of each other. The system also uses a computer algorithm to direct the sound waves into precisely the same distributions and energy levels that the spacecraft would experience during launch. Seventy to 100 microphones placed on and around the Orion capsule provide feedback, so the engineers know whether the sound waves are diffusing properly.

Roskie and his team compared the results from the portable setup to the results from an acoustic lab, and found out their experimental system was right on target. They’ll likely be using it for the rest of the Orion mission’s acoustic tests, as well as for other Lockheed space projects.