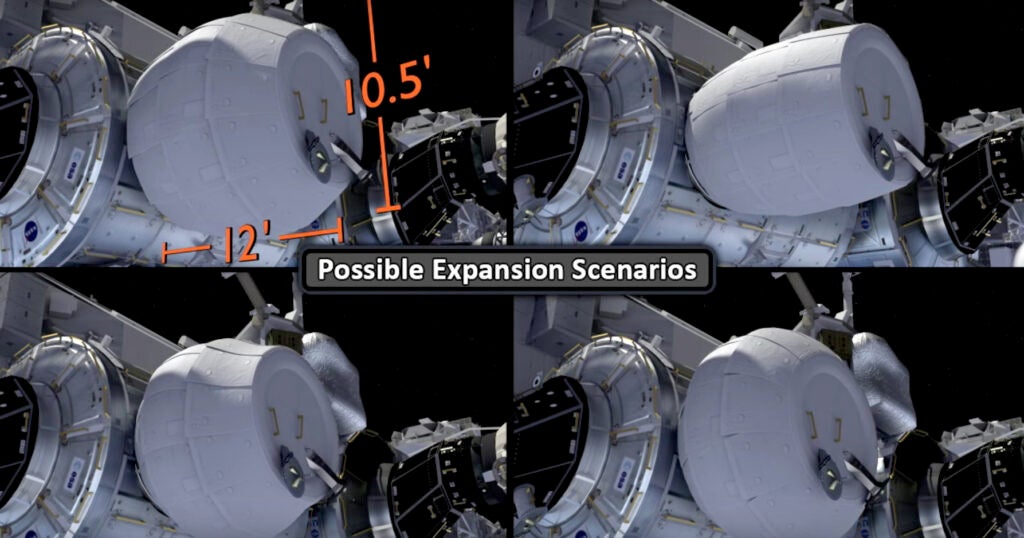 Four possible scenarios outlined by NASA in an animated video.

In just a few days on April 8th, SpaceX will attempt to launch its first re-supply mission to the International Space Station since an explosion destroyed one of its rockets last summer. Among the various supplies and cargo set to ride along on SpaceX’s uncrewed Dragon capsule is the first-ever inflatable space habitat designed to attach to the station — the Bigelow Expandable Activity Module, or BEAM.

Made up of aluminum and mostly, soft fabric, the BEAM is designed to pack down into a relatively compact 5.7 feet long and 7.75 feet in diameter when stowed for the flight into space, and then attached to the station’s structure and inflated with oxygen to 12 feet long and 10.5 feet in diameter. If all works as planned, astronauts will then enter the resulting windowless room several times during the two years the BEAM is supposed to remain inflated, installing sensors and testing its viability for future long-duration space missions. If it works, it could help launch a whole new era of “inflatables,” space habitats that take up much less space and weight, reducing the costs of space travel and exploration.

But as of now, NASA still isn’t sure exactly how BEAM will act when inflated. Take a look at the following animation the space agency released last week, which outlines four possible expansion scenarios for the BEAM once it’s attached.

Still, NASA is confident enough that the expansion will work in some fashion to go ahead with the mission. The space agency is holding a press conference right now at 1 p.m. ET to go over more information about the BEAM and the other experiments carried aboard SpaceX’s Dragon. We’ll have an update when it concludes. Meanwhile watch NASA’s full animated BEAM video here.