I Bought an Awesome (if Obscure) Piece of Space History!

Beginning in the mid-1950s, engineers started looking into the problem of aerodynamic heating; the challenge was devising a way to... 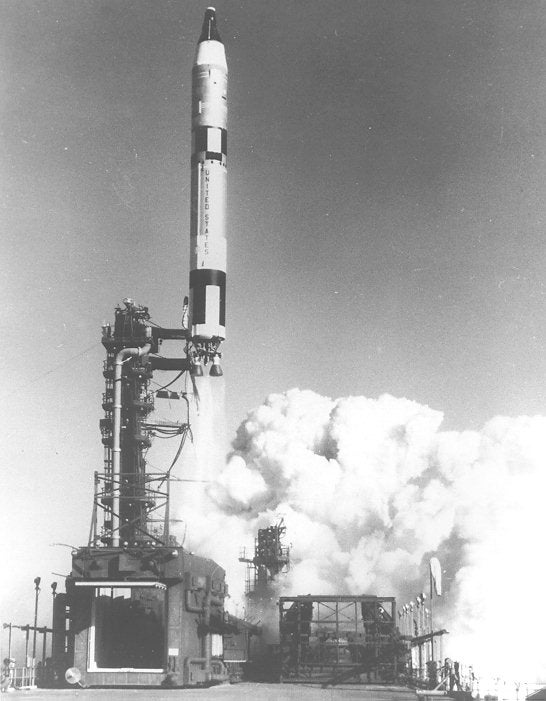 Beginning in the mid-1950s, engineers started looking into the problem of aerodynamic heating; the challenge was devising a way to have a warhead launch on a missile and reenter through the Earth’s atmosphere unscathed so it could explode on target. The same principle carried over into spaceflight. In the early space age, a man took the place of the warhead on those same missiles. This ultimately led to the ablative heat shields that kept Apollo astronauts safe during their fiery returns through the atmosphere before splashdown, but they were a new technology in the 1960s. That meant, that like so many piece of Apollo, it was proved during the Gemini program. The very first ablative heat shield was qualified on Gemini 2 in 1965, and I recently bought a piece of that heat shield. 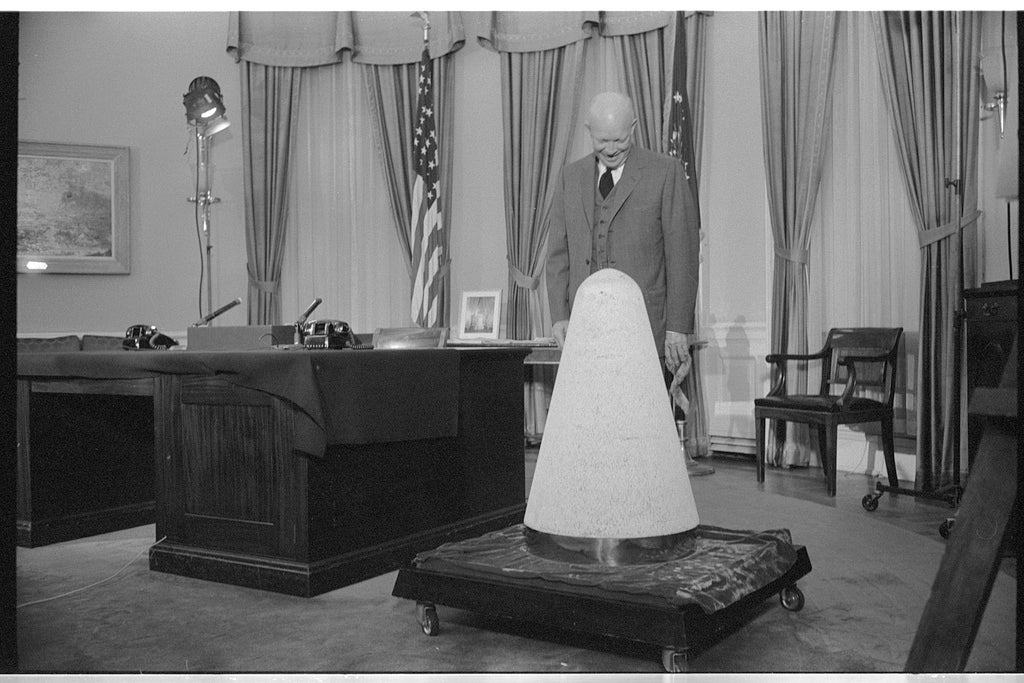 Eisenhower and a Jupiter Nose Cone

Eisenhower looks at a Jupiter nose cone that successfully survived the return through the Earth’s atmosphere.

Tests using ablative materials on nose cones began as part of the Army’s Jupiter C program in the 1950s with materials like graphite, teflon, nylon, and lucite. This early testing proved ablation was a good method of protecting a payload from the heat generated by friction as the warhead (though in this case it was a nose cone) fell through the Earth’s atmosphere. But the NASA’s predecessor organization the National Advisory Committee for Aeronautics (had a preference for heat-sink metals — described as a sort of heat sponge — used by the US Air Force.

When NASA started working on the manned spaceflight program in 1959, the NACA’s preference for heat-sink over ablation lingered. Not only had a beryllium heat-sink worked on tests with the US Navy’s Polaris missiles, it was a technology that would protect an astronaut without creating the “plasma sheath” characteristic of ablative heat shields. This envelope of ionized air produced as the heat shield burns away promised to knock out communications during reentry. Many within NASA were keen to avoid any loss of contact with America’s earliest astronauts.

And so the agency’s Mercury program moved forward with a beryllium heat-sink, and the heat of reentry never affected the astronauts on board. But already in March of 1960, there were doubts about whether this type of heat management would work for lunar missions. Mercury was reentering the atmosphere at a shallow angle for a longer exposure to reentry heating. Apollo’s reentry would be much faster. These missions would come screaming in from the Moon at speeds upwards of 35,000 feet per second. To manage this heating profile, the decision was made to use an ablative heat shield on Apollo, and that meant this new technology would be tested and proven during the interim Gemini program.

The Gemini program kicked off with Gemini 1 on April 8, 1964, It was primarily a test of the Gemini-Titan launch vehicle and the spacecraft’s structural integrity while leaving the ground. The unmanned vehicle was sent into orbit but the mission, with the launch qualification goals achieved in the first stages of the flight, was terminated after three orbits. The spacecraft was left in space to disintegrate during reentry three days later on April 12.

Gemini 2 was the first mission of the program where the spacecraft was designed to be recovered, and part of the recovery mission was testing the heat shield. In fact, this was the primary objective of this flight. Proceeding with manned Gemini missions hinged on Gemini 2’s successful demonstration of the ablative heat shield.

Though the stakes were high, the mission wouldn’t be. This flight was the only suborbital mission of the program, and engineers came up with a clever way to mimic the highest heat a spacecraft was expected to encounter returning from space. The heat shield was built half as thick as those that would fly on manned missions, and following a high arcing ballistic trajectory with a peak altitude of 106 miles, the spacecraft would be exposed to hotter temperatures than any manned mission would. 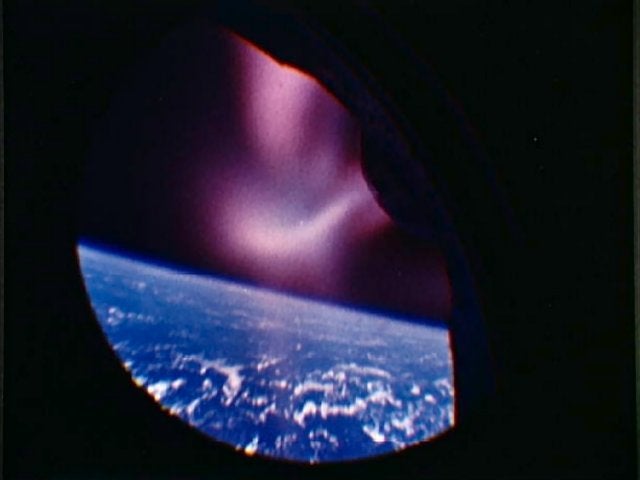 An onboard view of Gemini 2’s atmospheric reentry.

Gemini 2 launched a little after 9 o’clock in the morning on January 16, 1965. Except for the thinner heat shield, the spacecraft was the same as the one that would carry astronauts on later missions. It was pressurized as it would be on a manned flight. It even had a crew of sorts. Two “simulated astronauts” made of sequencers, batteries, cameras, lights, instrumentation, a timer, and a tape recorder were installed in the ejection seats. These machine men managed all the things a crew would, and also recorded data points that would be pertinent for future manned missions like launch vibrations and cabin temperatures.

The spacecraft reached its planned peak altitude of 106 miles, then reentered the atmosphere at 16,600 miles per hour. Temperatures measured on the heat shield and spacecraft were between 20 and 60 degrees Fahrenheit hotter than any planned Gemini reentry was expected to experience. The spacecraft splashed down 2,126 miles downrange of its launch site after a 19 minute flight. The spacecraft was adequately protected from atmospheric friction, clearing the heat shield to launch on a manned mission, which it did on the very next flight. Gemini 3 was the first manned orbital mission of NASA’s Gemini program. 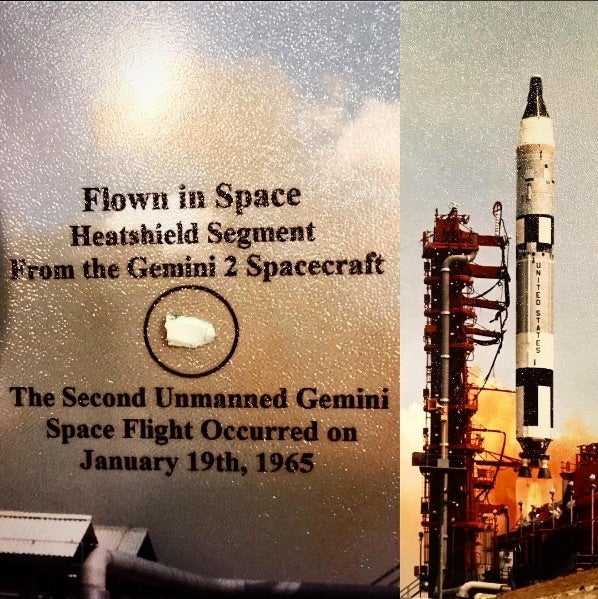 My tiny little segment of the heat shield that cleared Gemini for manned missions!

Sources: This New Ocean by Swenson, Grimwood, and Alexander; Gemini 2 at NSSDC;