You can learn a lot from 4.5-billion-year-old rocks. 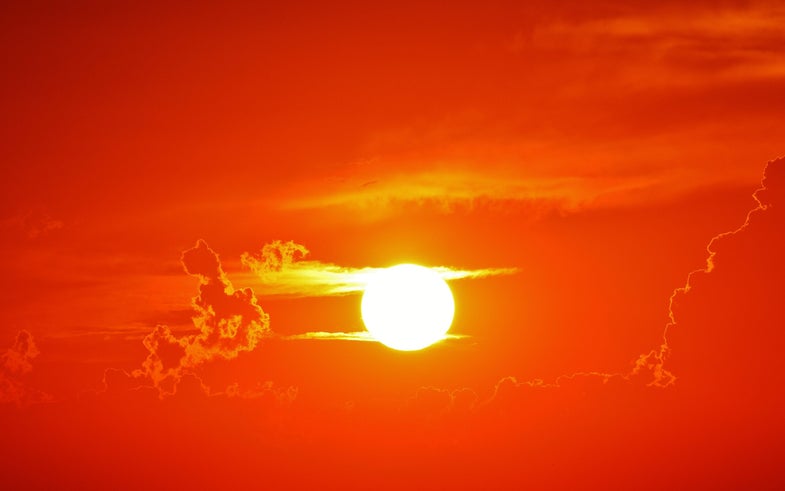 Many newborn and toddler stars are not all that different from newborn and toddler humans—prone to bouts of cranky energy, loud and violent tempers, and indiscriminately wailing and vomiting heaps of disgusting matter in every direction. It’s natural to assume even our 4.6 billion-year-old sun had a messy heyday in its youth, but without any hard evidence to prove this was case, the only thing many scientists had going for them were strong suspicions. New data, focused around a peculiar set of ancient blue crystals from space, seems to suggest the sun emitted a much higher flux of cosmic rays in its early history than we once thought.

Those blue crystals are called hibonite, and they’ve arrived here on Earth by way of meteorite impacts. Hibonite are effectively some of the first minerals formed in the solar system, created by the cooling gas derived from the sun. The new study, published in Nature Astronomy, focuses on the Murchison meteorite, which fell in Australia in 1969, likely originating from an asteroid in the asteroid belt—and which possesses pieces of micron barely larger than the width of human hair.

“We think hibonites like those in Murchison formed close to the young sun, because that is where temperatures were high enough to form such minerals,” says Levke Kööp, a cosmochemistry researcher at the University of Chicago and the lead author of the new study. “Hibonites from Murchison are famous for showing large isotope anomalies that tell us about the types of stars that contributed material to the molecular cloud that the sun formed from.” The team doesn’t have an exact date on the hibonite grains, but based on the age of refractory elements in the meteorite, it pegs the crystals to be a little over 4.5 billion years old.

If hibonite really was produced by an early active sun, the answer would be found in analyzing the crystals’ helium and neon isotopes. High energy particles being ejected by a volatile young sun would have hit calcium and aluminum deposits in the crystals and split these atoms into neon and helium, and been irrevocably trapped for billions of years.

The research team studied the hibonite crystals using a highly sensitive mass spectrometer at ETH Zurich in Switzerland, melting the grains of hibonite down with a laser while the spectrometer measured and confirmed the presence of helium and neon concentrations.

Beyond simply illustrating that the young sun went through a phase of high activity, the new results also show how some meteorite materials from the solar nebula are directly affected by young sun irradiation. The team also noticed helium and neon were absent from younger crystals, indicating that something changed later in the irradiation conditions created by the sun, and raising the question of what happened. This sort of insight might augur later into a better understanding of how the roles star evolution plays in the creation of elements and materials that later on assemble into planets and other celestial bodies.

“Over the last few decades, there has been a controversy whether meteorites contain evidence of an early active sun,” says Kööp. “In general, even for us, it was hard to know what to expect from this study. In the end, we were very excited to see such a clear irradiation signature in the hibonites.”

Andrew Davis, a study coauthor affiliated with the University of Chicago and the Field Museum of Natural History, points out the minuscule size of the hibonite grains limits how much the team could measure helium and neon traces, as well as an analysis of the absolute age of the hibonite itself. Moreover, the analyses also involve destruction of the grains. “We are working on a new instrument in my lab to study the isotopic compositions of more elements in the hibonite grains, to better understand how different sources of dust were mixed in the early solar nebula,” he says.

Still, the implications of these findings alone shouldn’t be understated. “I’ve been involved with this type research for a very long time. I’ve constantly been skeptical of claims from scientists that traces of the early sun have been found.”