Forget the Blood Moon, the Red Planet is waiting for you tonight

Mars is at its closest and clearest right now. You know you want to look at it. 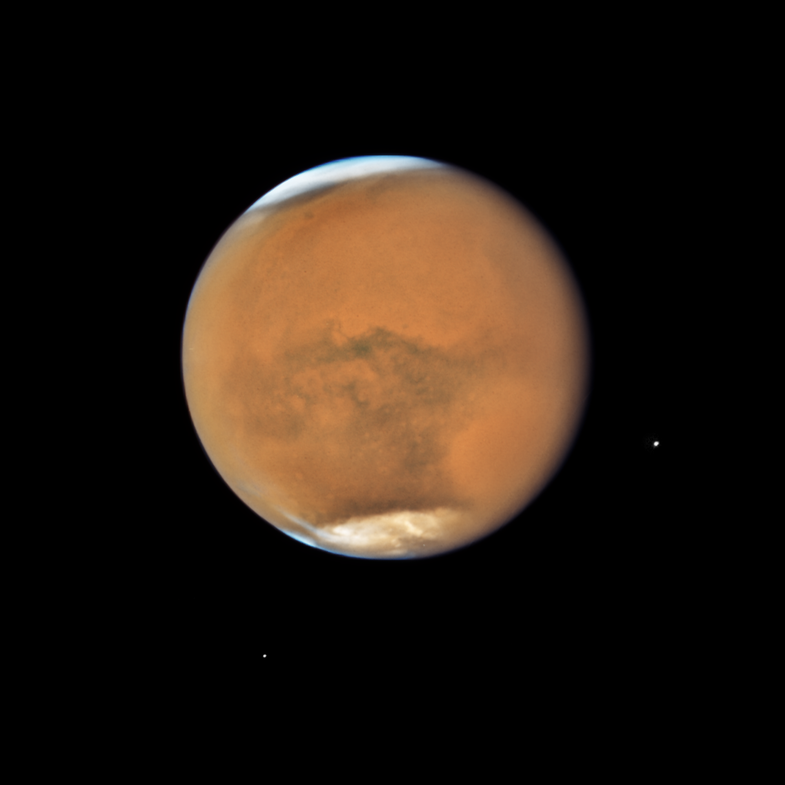 Though news has been trending about the blood moon for weeks now in the U.S., it will only be visible to people in the Eastern hemisphere . And though a “blood moon” is a pretty amazing phenomenon for sky-gazers to witness, there’s another celestial event happening on July 27 that American can see: Mars.

And not just Mars, a little pinprick in the sky. Mars in all its shining glory, sitting near its closest point to Earth and in opposition. This will be the brightest the Red Planet has been since 2003. During that event, known as the Great Opposition, the two planets were only 34.65 million miles apart, the closest they’d come in 60,000 years. This weekend, Mars will be 35.8 million miles away. That sounds like a lot (and, honestly, it is a lot), but think of this: normally, the Red Planet is 140 million miles away from Earth.

That’s only part of why Mars will twinkle especially brightly in the night sky. The planet is also in opposition to Earth, meaning that we’re sitting right between Mars and the sun. That means more light is bouncing off the planet’s surface and hitting our planet, where we puny humans see it as a particularly sparkling point in the sky. For a few days, it will [actually overtake Jupiter as the third-brightest object in the sky, just behind the Moon and Venus.

So how do I see the Mars opposition?

Just look up! You’ll be able to see Mars as the visibly brightest object in the sky for the entire weekend. It’ll actually be bright all the way through September, but this weekend it will be especially brilliant. The absolute best viewing time actually already passed (sorry!)—it happened at 1:07 a.m. on July 27—but it’ll still be close to perfect opposition and approaching its absolute nearest point through Monday.

It will be so close that under normal circumstances, even amateur astronomers would be able to see features of the surface through telescopes. Unfortunately, there’s a planet-encompassing dust storm going on right now. Most of the surface of Mars is currently covered in dust, which obscures a lot of the main features, but the view will still be beautiful.

You can see the difference in what’s observable in the photos below:

Both were taken near opposition, but in the 2016 photo there’s no dust storm. Widespread storms like this one tend to happen when Mars is closest to the sun, when it’s summer in the southern hemisphere. The planet’s proximity to the sun means heating is at a maximum in the Martian atmosphere, which makes it more prone to generating winds.

If you don’t own a telescope and are particularly bad at finding celestial bodies, try checking out a stargazing apps. Night Sky, Star Walk, SkyView—they’re all good options. The apps all use your location and the internal gyroscope in your smartphone to allow you to hold the phone up towards the sky and show you what you’re looking at. Just turn around in circles, pointing your phone at different parts of the heavens until you spot Mars. Some of the apps even allow you to search for a feature and a little arrow will guide you towards the body you want to see.

What if I have plans on Friday?

Don’t worry—Mars doesn’t actually reach it’s technical closest point until 3:40 a.m. EDT on July 31. It won’t be in direct opposition at that time, so that won’t be the best time to view, but virtually all weekend you’ll get a great view.

Saturn is also quite bright right now, since it was at its closest point on June 27. Here’s the gorgeous picture Hubble captured of it in early June:

If you live in an area with clouded skies this weekend, or really were planning on staying inside all evening, don’t worry. The next close approach of Mars to Earth will happen on October 6, 2020, just a few years away.

So I really can’t see the lunar eclipse?

If you’re in the Western hemisphere, you’re missing it. Either it’s happening right now or you’ve already missed it, and you’re not in the right part of the world anyway. The eclipse is visible in India, the Middle East, and bits of southern and eastern Africa, which are running around 7-10 hours ahead of the eastern U.S. (or 10-13 hours if you’re on the west coast of America). That means their nighttime is going on mostly during the daytime in the U.S.

By the time it’s nighttime in America, the eclipse will be over. Sorry.

Focus on Mars! The Red Planet is beautiful and visible and you don’t have to stay up super late to see it. Just look up and appreciate its majesty. Take the opportunity to go somewhere dark, set up a blanket, lie back—and enjoy.