What gives a sunset its color?

Next time you're watching a sunset on the beach, think about the amazing physics that's bringing you the view. 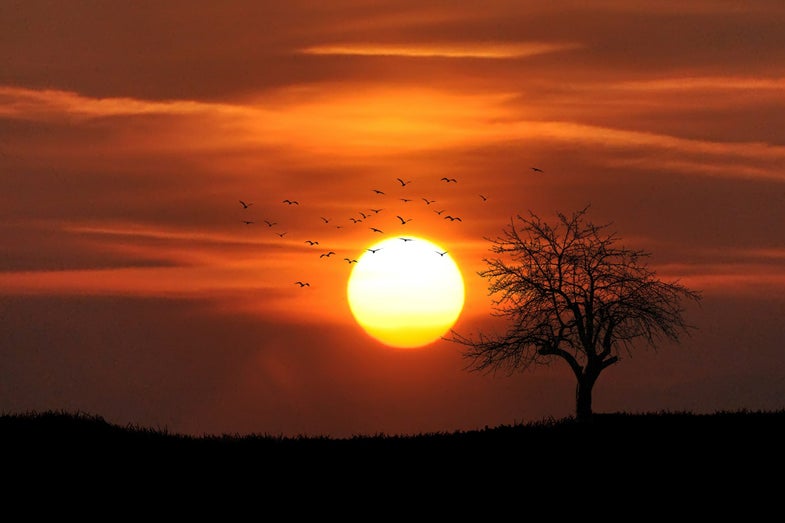 Gaze up at the sky one evening and you’re likely to see the crisp blue sky of the afternoon replaced with a reddish-orange hue stretching for miles. You might be wondering: Why does the color of the sky change at different times of the day? The answer has to do with how light from the Sun interacts with the atmosphere surrounding the Earth.

Light travels in waves. Every color we see is determined by the length of those waves. Red wavelengths are the longest, and as you go through the rainbow the waves get shorter and shorter until you reach the blues and violets, which are the smallest.

As the Sun’s light travels towards us, at first all it encounters is the emptiness of space. But here on Earth, swirling in the air around us are thousands of near-invisible particles. Dust and water droplets are the larger ones, but there are also the minuscule gas molecules—mostly oxygen and nitrogen—that make up the air itself. The wavelengths that make it to the Earth’s atmosphere collide with these particles, which sends light bouncing in many different directions. Think of it like this: If you’ve ever been in a crowded bumper-car pavilion at an amusement park, bumping into other cars and being bumped into yourself, you’ve played the part of a light wave.

But not all wavelengths bounce around to the same degree.

“The atmosphere acts as a filter, and it’s always happening, you just don’t necessarily know it. It’s basically an effect of selective scattering,” says Stephen Corfidi, a meteorologist at the National Oceanic and Atmospheric Administration.

During the day, when the light has the shortest distance to travel through the atmosphere, what we end up seeing are the blue waves that have been scattered all across the sky. At the day’s end, though, the light has to travel through much more of the atmosphere, and those short, blue light waves have a tough time getting past all the molecules. They mostly get scattered away before they ever reach us. The result is that red sky we see at sunset, since longer red wavelengths are still able to penetrate the atmosphere.

So when you see a red sky at night, just remember that it’s actually the last remaining survivor of the whole rainbow of colors.