The ancient Maya faced severe drought, according to a mineral deposit. 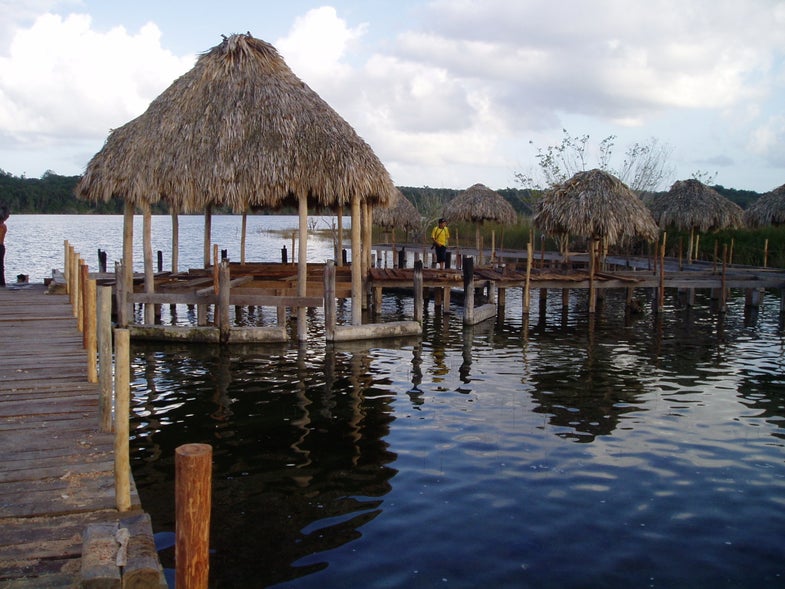 A special lake lies in the heart of the Yucatán Peninsula, the tail end of Mexico that sticks up into the Gulf. It’s uniqueness? The loch is sealed with a clay bottom: the only way for water to enter is by rainfall, the only way for it to escape is through evaporation. Its waters are salty, brimming with dissolved minerals. When rain eludes the area for long enough, a white crystal, called gypsum, collects in the mud at the lake’s bottom. Over the last five thousand years, the residue has only appeared in the lakebed during one chunk of time: just as the Maya Empire entered its decline.

Decades ago, by studying the lake, called Chichancanab, climate researchers learned that a drought befell the Maya. However, they had no idea how parched the region was. Now, using gypsum as a guide, the same group showed that rainfall dropped by nearly half during the collapse of the Maya, and upwards of 70 percent in the driest years, according to a paper published on Thursday in Science.

Rainfall was a big deal for the ancient Maya: Their elaborate calendar may have been designed to help predict the downpour of seasonal rains. Today, Maya people still hold rain ceremonies, similar to the rituals performed thousands of years ago, to coax showers from the gods. At Lake Chichancanab, the largest on the Yucatán Peninsula, researchers figured out how dire conditions became.

“Chichancanab is a bit of a gold mine. But in this case it’s not gold, it’s gypsum,” says Mark Brenner, who studies lakes across geologic time at the University of Florida, and one of the authors on the paper. “It’s so valuable for what we do.”

The mineral is a boon to researchers because when gypsum forms, it traps water within its chemical structure, preserving the ancient molecules. “You could call it fossil water,” says Nick Evans, who studies paleoclimate at the University of Cambridge and also worked on the research.

During the drought that scorched the area well over a thousand years ago, the lightest atoms evaporated from the lake first, leaving the heaviest bunch behind. By analyzing the water molecules stuck inside the old gypsum, the researchers determined the Maya went through two extreme dry patches for decades at a time. The first lasted from roughly 750 to 850 CE, in the height of the civilization, and the next came between 950 and 1050 CE, as political collapse wrecked the major cities of the Maya.

“It’s pretty amazing that we can now estimate rainfall and the relative humidity thousands of years ago,” says David Hodell, the lead author of the paper who also studies paleoclimatology at the University of Cambridge. He and his team collected modern-day water samples and climate data from the lake for over a decade to use the known relationship between the chemical makeup of the water and the amount of rainfall, to better estimate ancient precipitation.

“You can apply this method to any lake system or marine deposit or Mars, for that matter,” Hodell says. Anywhere gypsum is found, including the red planet, is game. If they could get their hands on a Martian sample, researchers could study extraterrestrial climate history. For now, examining gypsum in a Mexican lake can provide insight into the undoing of the Maya.

Lack of rain didn’t take down the Maya by itself, but it sure didn’t help. “We’re not promoting a single bullet theory,” Brenner says. “When you have these prolonged severe droughts, it probably causes intense stress on the community.”