Before Jupiter got huge, it had a pretty messed up childhood 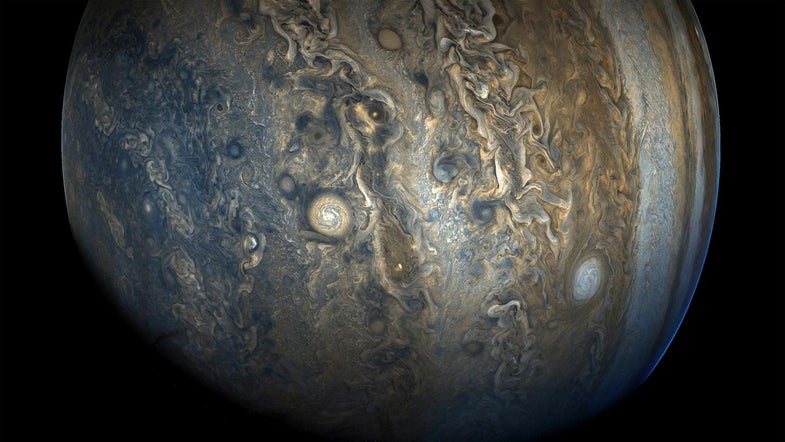 Jupiter is by far the biggest planet around the sun. However, scientists now find repeated pummeling Jupiter experienced when it was young may have stunted its growth for millions of years.

With a mass roughly 300 times that of Earth, Jupiter is the largest planet in the solar system. In comparison, the next biggest, Saturn, is only about 95 Earth masses.

Previous research suggested Jupiter helped control the formation of its smaller siblings, by hurling planetary building blocks around the solar system with its powerful gravitational pull. However, much remains uncertain about how Jupiter itself grew to its current giant size.

“Wrestling with Jupiter’s large mass and the time it took to form has been a challenge that scientists have faced for going on 50 years now,” said astrophysicist Gregory Laughlin at Yale University.

Complicating the story of Jupiter’s growth were analyses of meteorites revealed last year that suggested that Jupiter’s core quickly grew to about 20 Earth masses within 1 million years after the birth of the solar system, but then more slowly took another 2 million years or so to collect enough material to grow to 50 Earth masses. “We were very puzzled, since from our experience it looked impossible that a core of 20 Earth masses could accrete gas at such a slow rate as suggested,” said Yann Alibert, an astrophysicist at the University of Bern in Switzerland, and lead author of a study published this week in Nature Astronomy.

To solve the mystery these meteorite findings raised, the scientists used state-of-the-art computer models of planetary formation to simulate how Jupiter might have emerged from gas, dust, small pebbles only centimeters large and bigger chunks known as planetesimals a few kilometers to hundreds of kilometers in size. The standard model for giant planet formation suggests that a planetesimal serves as a planetary embryo that other rocks can accrete onto; after this seed exceeds a critical mass, it rapidly accretes gas, ballooning to giant size.

The key discovery in this new work is that collisions from the planetesimals would have released great amounts of heat. This heat would have kept young Jupiter from collecting much gas, despite the powerful gravitational pull it would have possessed given a mass 20 times that of Earth’s.

“The ability to accrete gas does not depend only on the gravity, but also on how much the atmosphere is able to cool and contract,” said study co-author Julia Venturini, an astrophysicist at the University of Zurich in Switzerland. “The cooling and contraction allows for more gas to enter in the gravitational influence of the planet, and thus, it allows for more gas to be accumulated in the form of an atmosphere. If the atmosphere is heated, its cooling will take much longer.” Without this heat, the growth from 20 Earth masses to 50 Earth masses should have taken a few tens or hundred thousand years, “not 2 million,” Alibert said.

Once Jupiter cooled enough, it could rapidly accumulate gas around itself, leading to its current size of more than 300 Earth masses. “The heat provided by planetesimals is crucial to delay gas accretion and match the timescale given by meteoritic constraints,” Venturini said.