Diabetes: There’s literally an app for that 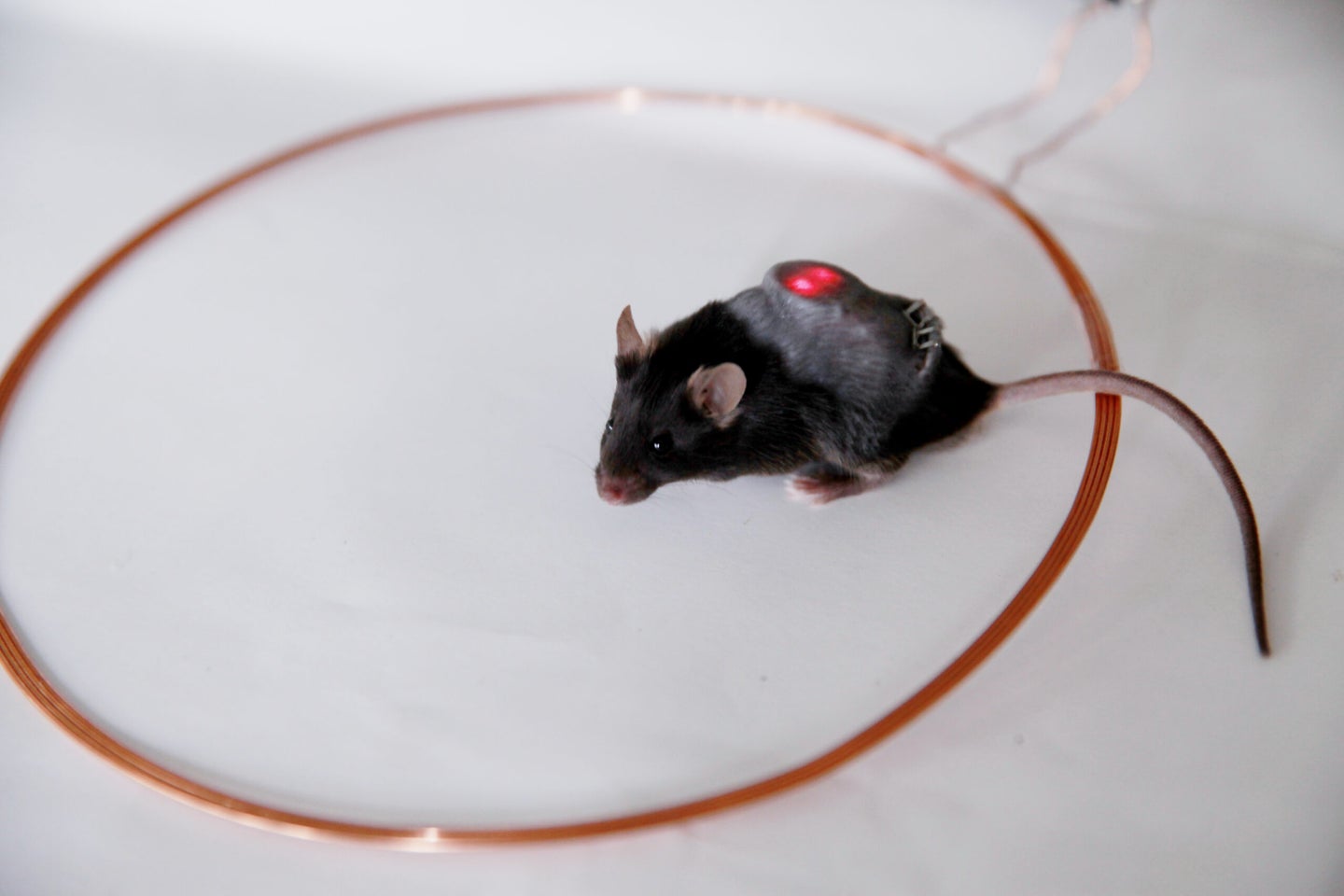 A push of a button causes the cells implanted in this mouse's back to start making insulin. Here, the mouse is standing inside a coil that powers the implant. Future versions would need to be battery operated in order to work in humans. Shao et al./Sci. Trans. Med. 2017
SHARE

People with diabetes often need to inject themselves with insulin on a daily or weekly basis. But a new device, tested in mice, might one day eliminate the need for needles.

In a study published today in Science Translational Medicine, Chinese researchers used a smartphone app to switch on insulin-producing cells implanted in a small group of diabetic mice. Less than two hours after the cells were switched on, the animals’ blood sugar stabilized, without making them hypoglycemic.

The most advanced version of this device uses a coin-sized hydrogel capsule, implanted under a mouse’s skin. Inside the capsule are LED lights and cells that are engineered to release insulin in response to far infrared light. When the mouse’s blood sugar gets too high, buttons on a custom-made Android app switch on the LEDs, triggering the cells to release insulin.

The app allows the user to determine how bright the LEDs should shine, and for how long, to control how much insulin the cells make. A Bluetooth transmitter attached to a regular glucometer can notify the smartphone app when the mouse’s blood sugar is high, automatically prompting the insulin production.

As promising as the results are, the system is not ready for primetime yet. The smartphone app actually communicates with a server, sort of like a smart home hub, that switches on an electromagnetic field coil surrounding the mice. The electromagnetic field powers the LED lights in the implant—so it only works when the mice are standing within a small ring, which would a problem for any diabetic who wants to occasionally leave their home. In addition, the current design still necessitates using a needle to test blood sugar.

Future versions of the HydrogeLED, as the researchers are calling the device, would hopefully solve both problems. Study author Haifeng Ye envisions a built-in glucometer that monitors the patient’s blood sugar 24 hours a day, automatically triggering the battery-operated LEDs when insulin is needed.

There’s still a long way to go before the HydrogeLED could make it into human trials. Ye and his colleagues need to test it in more animals (this version was tested in only five or six animals), and particularly in larger animals such as dogs or monkeys, and over periods longer than the 15 days of this preliminary study. They’ll also need to make sure all the materials are safe, and that they don’t spur an immune response or rejection.

“How soon should we expect to see people on the street wearing fashionable LED wristbands that irradiate implanted cells engineered to produce genetically encoded drugs under the control of a smartphone?” asks University of Wyoming biologist Mark Gomelsky in a commentary accompanying the paper. “Not just yet, but [this work] provides us with an exciting glimpse into the future of smart cell-based therapeutics.”