A new, implantable sensor that wirelessly transmits blood-glucose data has the potential to completely change the way most diabetics control... 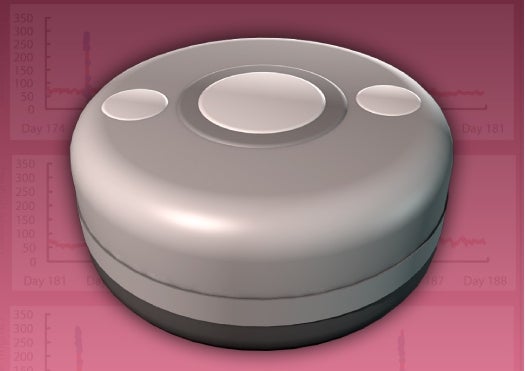 A new, implantable sensor that wirelessly transmits blood-glucose data has the potential to completely change the way most diabetics control their disease.

The round device is just a bit smaller than a Double-Stuf Oreo — about 1.5 inches wide and half an inch thick — and would be implanted in a person’s torso. It’s hermetically sealed, with an integrated antenna that wirelessly transmits data, a long-lived battery, and a pair of sensors.

One sensor detects only oxygen, the other a reaction that involves both oxygen and glucose. No matter how dense the scar tissue surrounding the implant, the two-sensor combination compensates, allowing the device to correctly calculate glucose levels in the blood.

Most complications from diabetes, from blindness to heart attacks, can be mitigated with monitoring — obsessive monitoring that involves blood-drawing finger pricks every 15 minutes, day and night. Most diabetics don’t even test every hour.

The most advanced technology currently available for continuous monitoring uses a needle-sized sensor that pokes deep into the skin, connected via a wire or wireless transmitter to a pager-sized monitor. It provides blood-sugar levels in close-to-real time, but it’s also a bit bulky and inconvenient: The needle-like sensors must be recalibrated daily and replaced every three to seven days, before the body encapsulates them with scar tissue and renders it useless.

Such rapid obsolescence doesn’t apply to the implantable device, which was developed by researchers at the University of California at San Diego and biotech company GlySens. “The sensor we developed was designed from the beginning to be a long-term device, and designed to operate for very long periods,” says David Gough, the UCSD bioengineer who led the research. In a paper published online today in Science Translational Medicine, Gough and his colleagues show that their sensor can function successfully for over 500 days — at least in pigs. They hope to begin the first human trial later this year, and are hoping for FDA approval within three years.

Right now, the device transmits its data directly to an external display. But ultimately, the researchers hope that ultimately data from their sensor could be transmitted directly to a patient’s smartphone, eliminating the need for any additional hardware. In combination with other technologies in development — an algorithm-crunching computer that uses glucose data to calculate how much insulin a person needs to control his blood sugar, and an automatic insulin pump to dispense the dose — the new sensor could help create a low-maintenance system that does the work of a pancreas.

“Continuous glucose monitors are very helpful, but the key thing is that you have to wear them, and that’s a big challenge for many people,” says Aaron Kowalski, research director for the Juvenile Diabetes Research Foundation’s artificial pancreas project. He notes that, because current devices are still slightly conspicuous and require vigilance, teenagers and young adults are less likely to wear them. “So the idea of having a one-year sensor that is implanted is very, very appealing. A device that alleviates some of these real-life issues means you don’t have to insert so much, you don’t have to see it, and you can walk around and not have all this stuff stuck to you.”