These Biohackers Are Creating Open-Source Insulin

To make the drug affordable for millions of diabetics worldwide 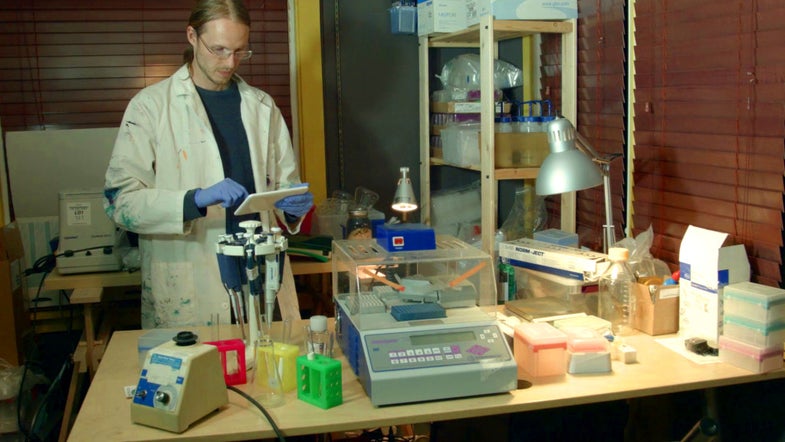 The 370 million people worldwide with diabetes rely on injections of insulin to regulate the amount of sugar in their blood, since their bodies can’t make the hormone themselves. Since there are no generic versions available in the United States, insulin is very expensive—that cost was likely a large proportion of the $176 billion in medical expenditures incurred by diabetes patients in 2012 alone. Now a team of biohackers with Counter Culture Labs, a community lab in Oakland, California, wants to pave the way towards generic insulin, and they’ve started a crowdfunding page for their project.

The biohackers’ goal is fairly straightforward: To make and refine synthetic insulin from E. coli bacteria and document their process. The result, they hope, will be that a generic pharmaceutical company will use that protocol to make insulin that’s affordable for diabetes patients all over the world. There are several types of insulin that have been approved by the Food and Drug Administration—some are long-lasting, others are fast-acting—but they are all protected by patents, so there are no generic versions. “It takes legitimate scientific research to create a biosimilar generic [drug], and generic companies don’t want to do scientific research,” says Maureen Muldavin, a program manager at Counter Culture Labs and a biohacker involved in the Open Insulin project.

Biosimilar drugs are not easy to concoct, Muldavin says, and insulin in particular is a challenge because of its structure. “It’s not as simple as putting the genetic code [in the bacteria] and out pops insulin,” she says. With the money raised in their crowdfunding campaign, the researchers plan to spend the next year figuring out how to make insulin from E. coli and purifying it. Since the resulting insulin probably won’t be pure enough to inject into human patients, so they will check that their insulin would be viable through other tests with antibodies. With the open-sourced insulin protocol, pharmaceutical companies could seek FDA approval to start producing generic insulin.

Kevin Riggs, an instructor in medicine at Johns Hopkins University who co-authored an article about generic insulin earlier this year, doesn’t think that Open Insulin will be enough to bring a generic insulin drug to the market. “I don’t think the major hurdle is that the companies don’t know how to make insulin, because that part is reasonably straightforward,” he says. “The real hurdles are getting the drug approved by the FDA (and since insulin is a biologic drug, it requires a lot more original data than an application for a small-molecule generic would), and then upfront manufacturing costs (because making a biologic drug is different, so it requires different equipment).” He suspects that it will take “an altruistic entity with a lot of start-up money” to make generic insulin commercially available.

But the biohackers behind Open Insulin also have their own agenda—they want to show the world that biohackers can make real scientific contributions, even if they’re not affiliated with an established world-class laboratory. “We want to show that a bunch of people with varying levels of scientific training can come together with a minimal budget and community space and do legitimate scientific research,” Muldavin says.

Even if their project is successful, it doesn’t yet mean that you can brew your own insulin at home quite yet—Muldavin estimates that’s about 20 years away. In that amount of time, she anticipates that researchers will be able to sell kits so that patients can brew all sorts of their own drugs at home. “We’re truly in a golden age of biology,” Muldavin says. “Every year it gets so much easier and cheaper to do genetic engineering.”